The Sewing Lawyer is not really sure what drew her to the ruffled blouse in the April 2010 edition of Burda Magazine in the first place.  Probably it was not the ruffles.  Nor could it possibly be the side zipper opening, or the deeply plunging front neck.  All of these features  have been eliminated or significantly altered in the Sewing Lawyer's version.  She did give the ruffle a try, despite knowing that it would not be satisfactory.  Forty or so years of sewing experience does sometimes enable one to predict when some feature of a garment will be completely wrong. Too bad they don't always allow one to avoid going ahead regardless. The Sewing Lawyer fatalistically reacquainted herself with her trusty seam ripper. 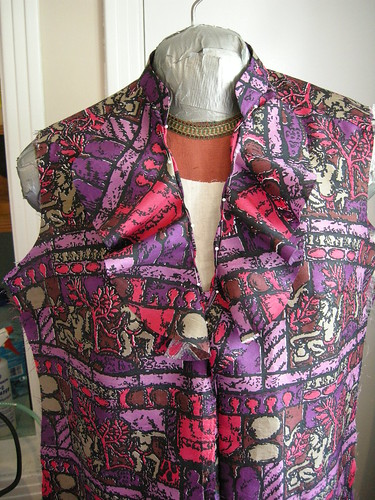 First, she tried cutting the ruffles down, dramatically.  Remember the attack of the ruffles, take 1?  Well, take 2, while marginally better, was not enough of an improvement.  Off they came ... again. 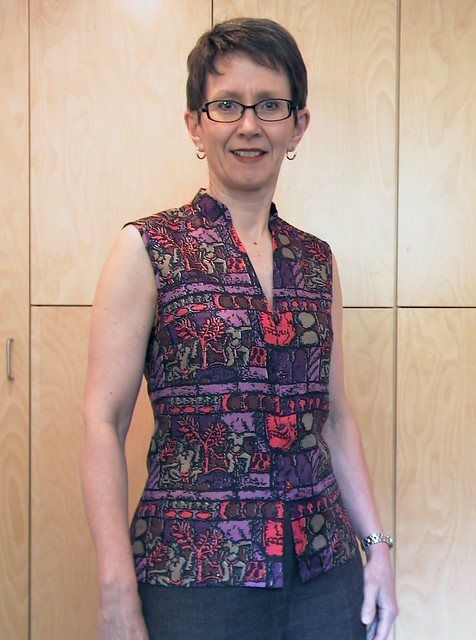 In the end, the Sewing Lawyer's version of the (formerly) ruffled blouse is both less and more.  It's ruffle-less, zipper-less, and less plunging.  It's more buttoned up, more in keeping with the usual style around here, and will be worn more too.  It's all good! 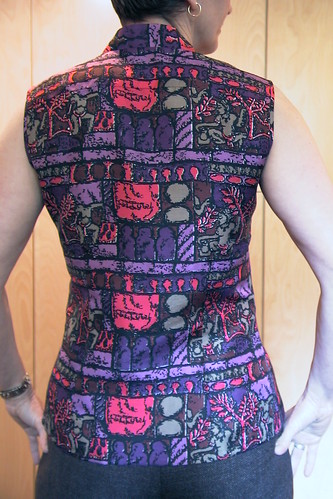 Here's a view of the back.

I'm happy with the print matching.  There is a yoke seam at the upper back... 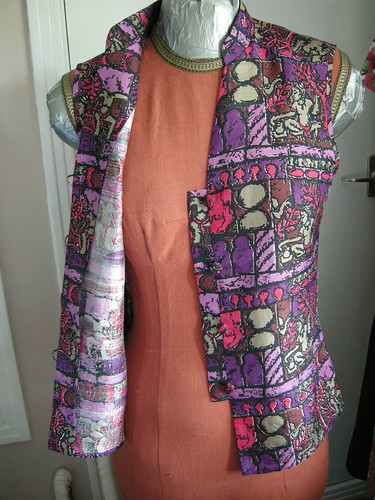 I'm also happy with the fact I was able to re-use the exquisite button loops and self-covered buttons from the plug-ugly skirt that this top was refashioned from.  (I don't think I gave details earlier.  This project started life as a thrifted floor-length skirt made from Thai silk.  A button-up dirndl, floor length, is not a great thing.  However, a dirndl will yield quite a lot of usable yardage, it had these beautiful tiny loops and self-covered buttons, the silk has a great hand, and I loved the quirky print and the colours.  Finding that the skirt was slightly musty, after taking it apart I threw the pieces into the washing machine.  It came out perfectly.) 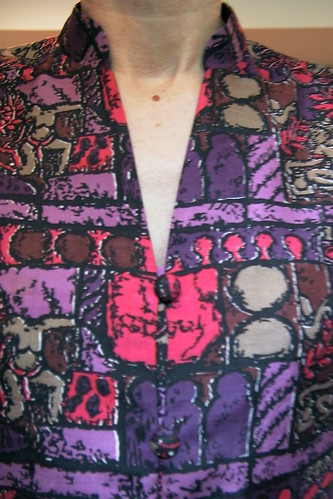 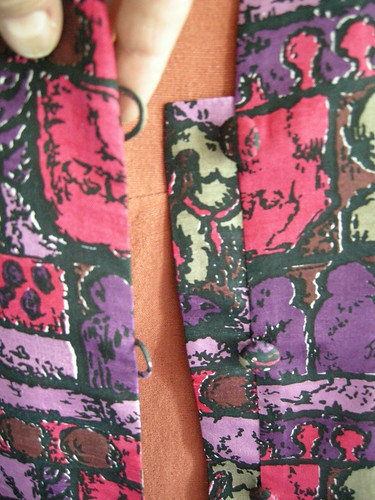 I turned the original cut-on-the-fold front into a button-up by virtue of adding a seam allowance at CF instead.  Instead of an overlapping front, I added a little shield to sit behind the loops.  It is barely visible, as you can see to the right, which means it was necessary. 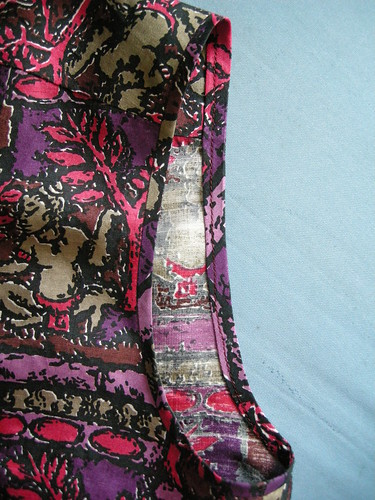 Some additional details.  First, the armhole edges are finished with a very narrow self-fabric bias strip.  I didn't initially read the magazine instructions (as usual) and thought the strip would make a little facing.  When I went to apply it I realized it was too narrow. Then I read the instructions which, as usual, are slightly incomprehensible.  If I correctly understand them, Burda wanted me to trim off the seam allowances at the armscye and encase them in a double-folded strip which I would be sewing in one pass.  Yeah right.  Instead, I cut off the seam allowances, and sewed the unfolded bias strip the desired distance from the raw edge, right sides together.  I then folded that over and, on the wrong side, pressed the raw edge up into the fold.  Finally, I stitched in the ditch from the right side, catching the wider folded edge underneath.  You can see both inside and outside in the picture to the left. 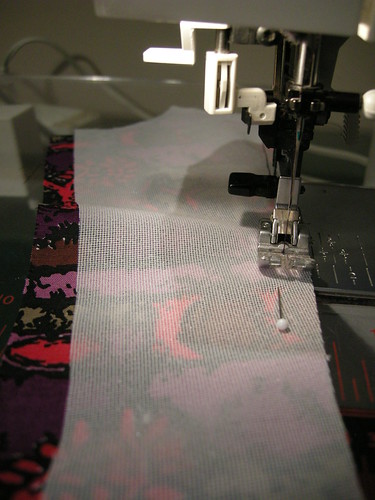 Second, like several other bloggers of late, I clean-finished the facings using fusible interfacing.  I do not know who to credit with this technique.  It's fantastic - both easy and producing an obviously superior result.  There is a tutorial over at Sigrid's site (from Lori V's blog, Girls in the Garden) but, thinking a few more details would help, I took some pictures while this was in progress.

First, cut your fusible as usual using the facing pattern piece.  Lay the unfused interfacing on the facing, right sides together (that means with the glue side NOT against your fashion fabric).  Sew the 2 together along the edge(s) of the facing which will not be sewn to the garment edge.

I think my seam was about .25" which ended up being about right, because this made the fusing a little bit easier than it might have been, I think. 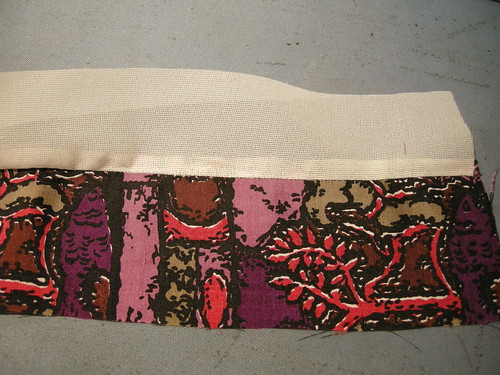 So here is the beginning of the fusing process, in which I use the seam allowance to help me open the seam completely and cleanly.

I started the fusing by opening the seamed unit, and fusing in the seam allowance only while gently holding the fusible interfacing taut and away from the facing.  In the photo to the right, the seam allowance is fused to the right, unfused at the left side.  Obviously you have to do this carefully and just with the tip of the iron, to avoid sticking your interfacing to the ironing board cover. 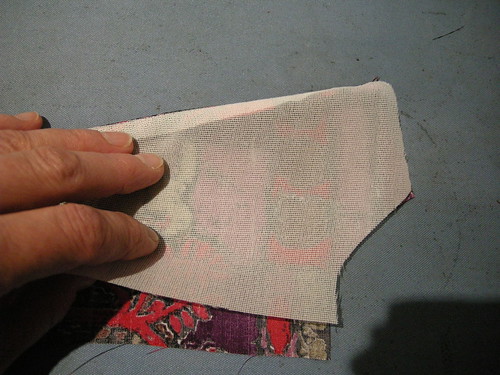 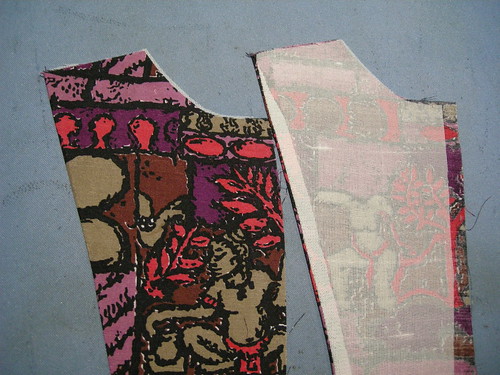 This fusing technique is trickier than the usual where you can take care of any misplacements by trimming away the fusible edges.  But it's worth it.  You end up with a perfectly finished edge.

My next project?  I'm planning to take Vogue 8718 out of its envelop and contemplate its mysteries.
Posted by KayY at 1:24 PM