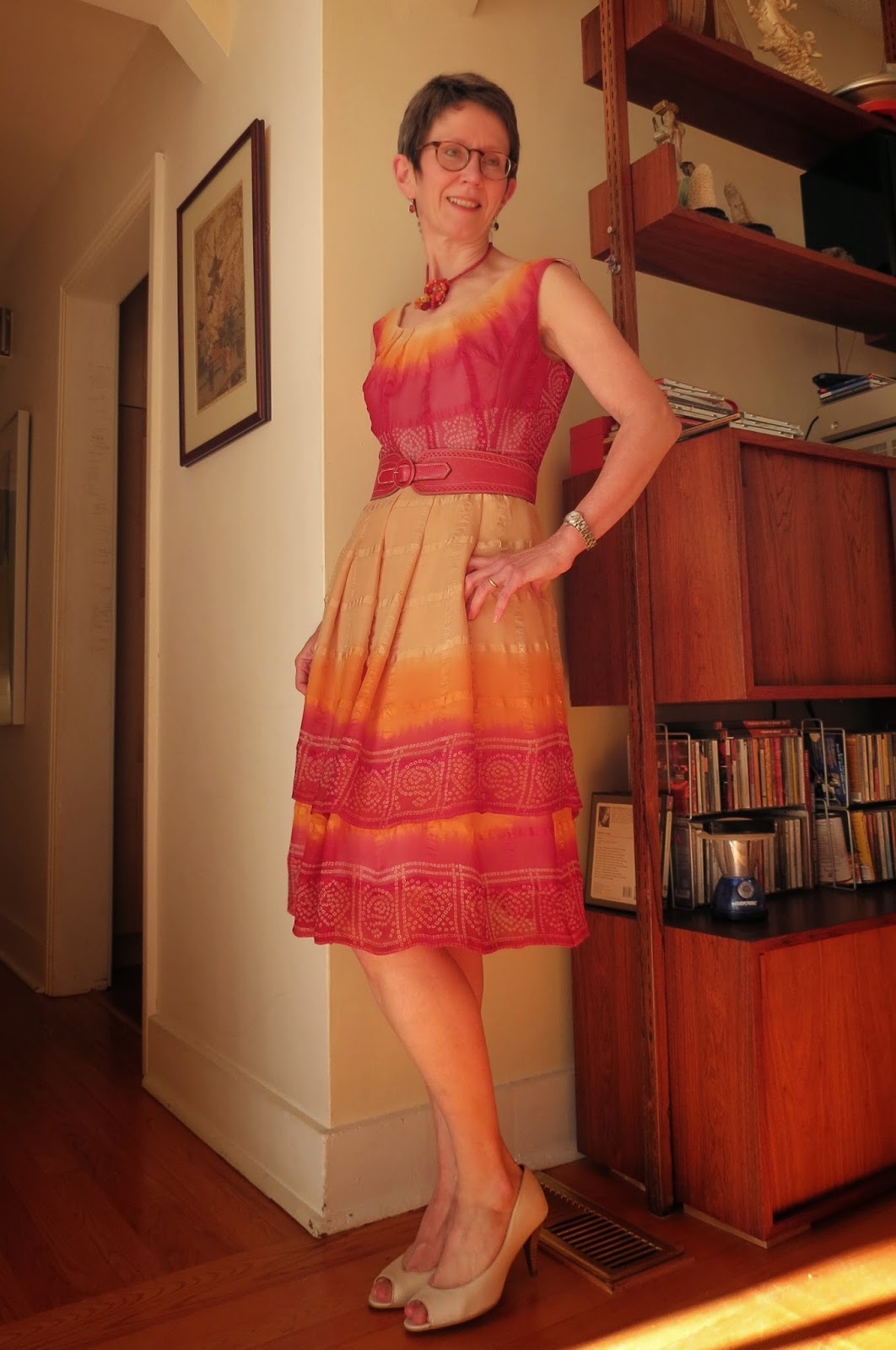 I sort of knew that closing up the back seam and adding the zipper to my sari dress was going to take all day.  And it did.

I decided to use a lapped application rather than attempt to sew an invisible zipper into my shifty and many layered silk skirt.  Especially since, as you may be able to see in the above photo) there is a pleat (so 6 layers of chiffon plus seam allowances) that lies EXACTLY on the cb seam line.

On the theory that visualization helps with most tasks, I spent a lot of mental sewing time between the last post and this one - imagining the installation and working through the mechanics of each side. I also (having been tipped off by Goodbye Valentino that it covered lapped zippers in a good way) downloaded the free zipper class from Craftsy and watched it.  This was helpful and I recommend the class to you, even though I didn't install my zipper exactly the way Sunni does in the class. 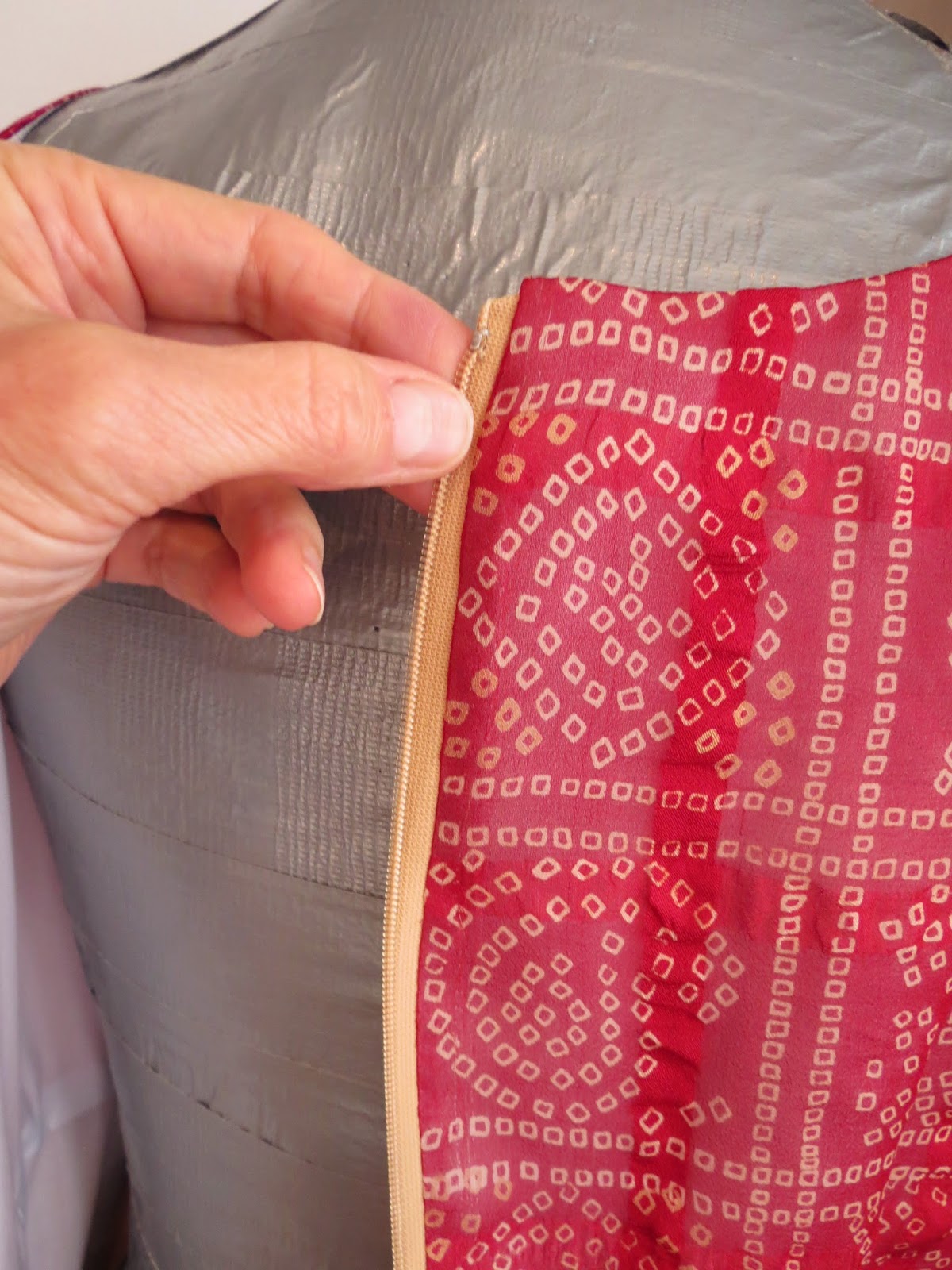 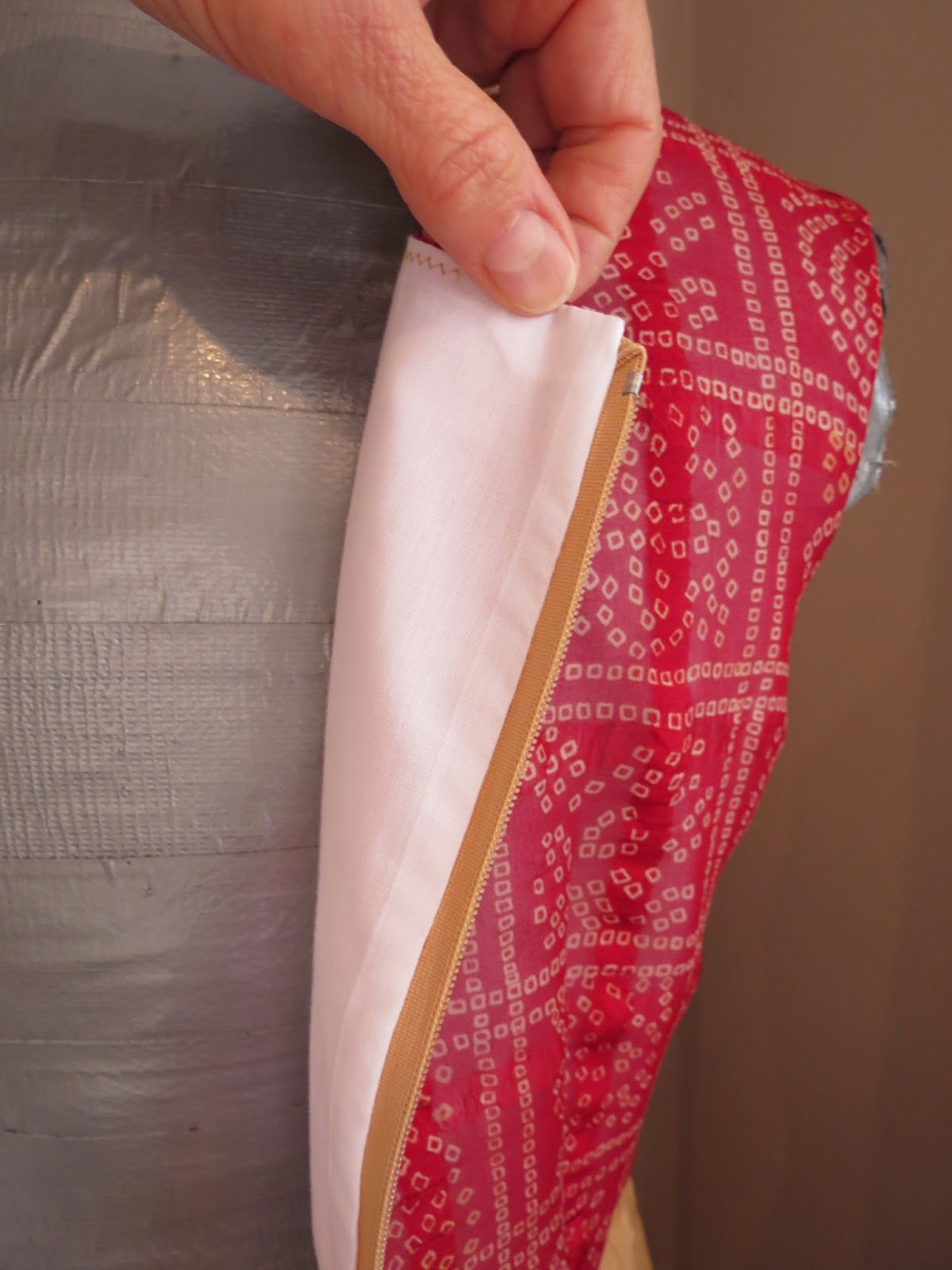 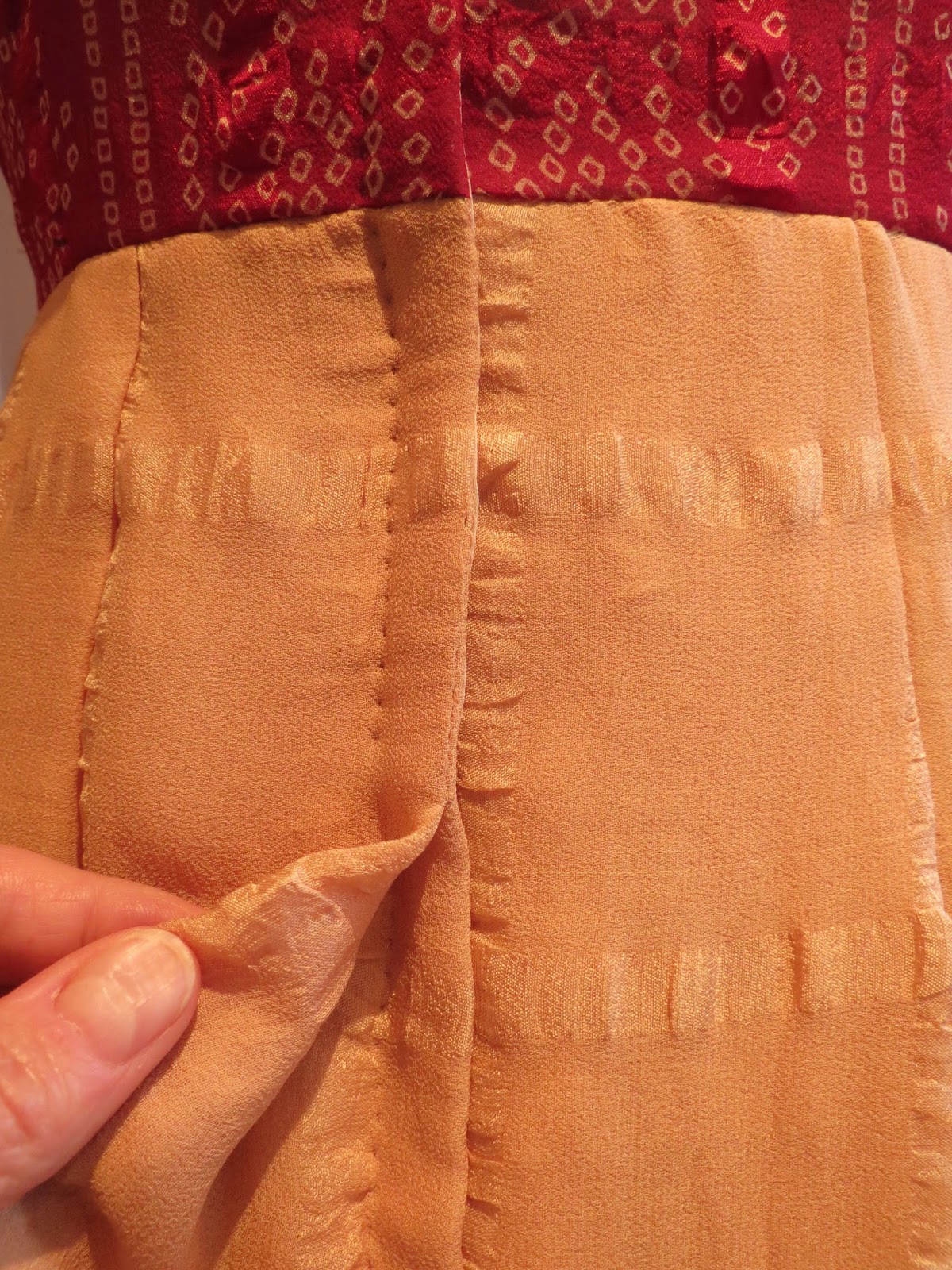 I had to add a facing of silk organza for the overlap side because my seam allowance was too narrow. With this zipper installation, the centre of the zipper is shifted to the overlap side.

Once I had it all lined up I very carefully sewed the zipper in by hand, using a pick stitch.  Like this, but without the beads. 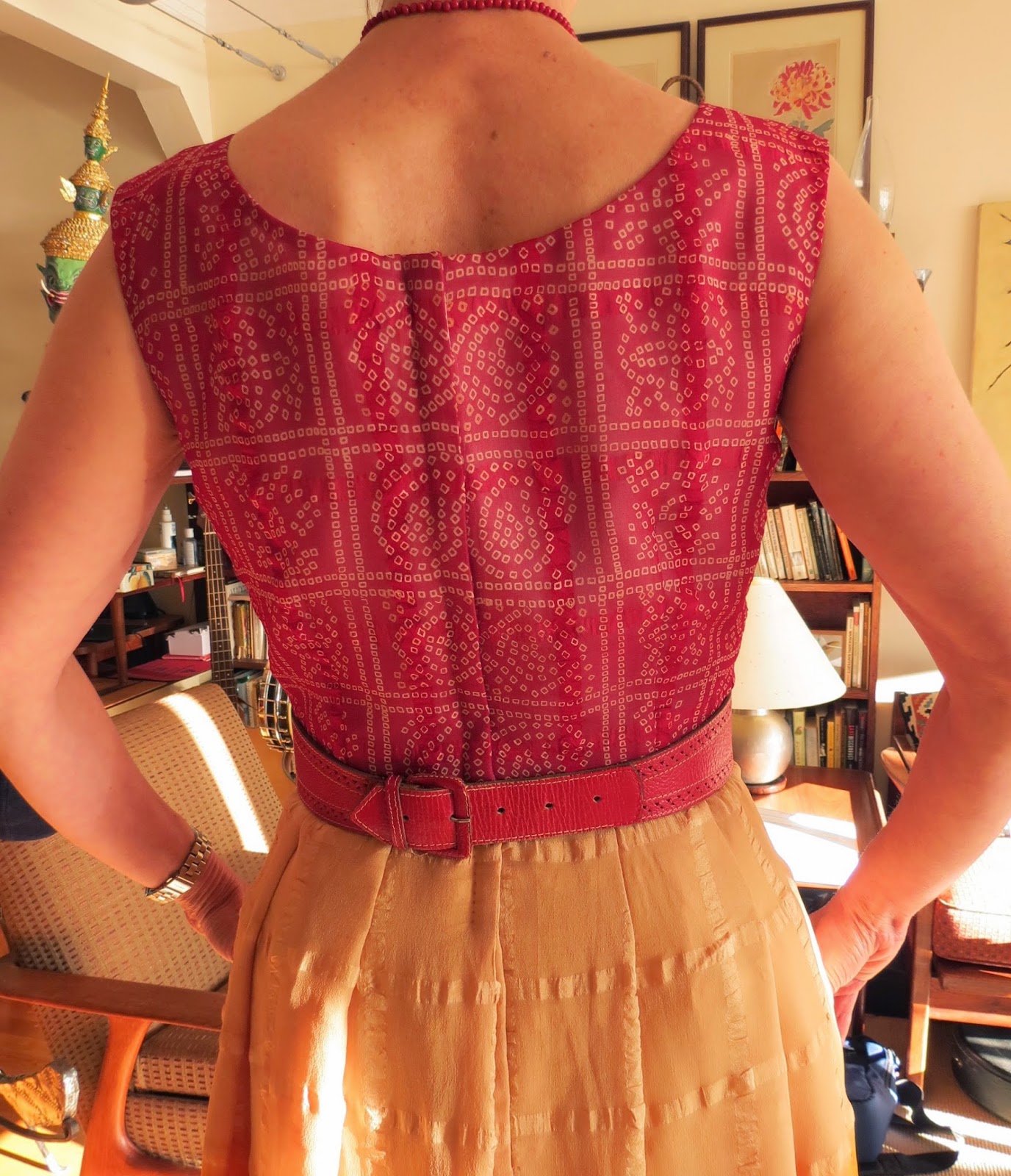 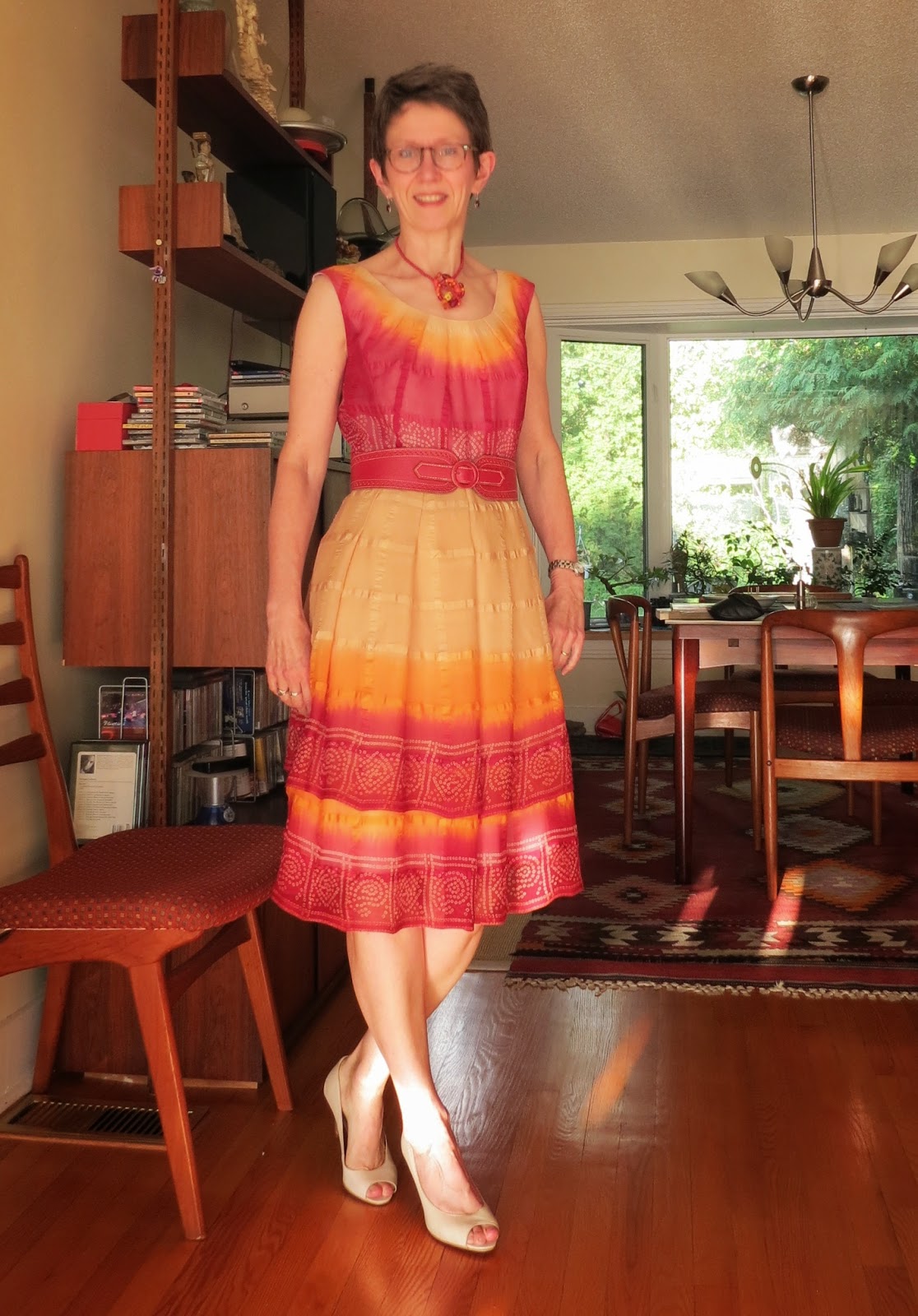 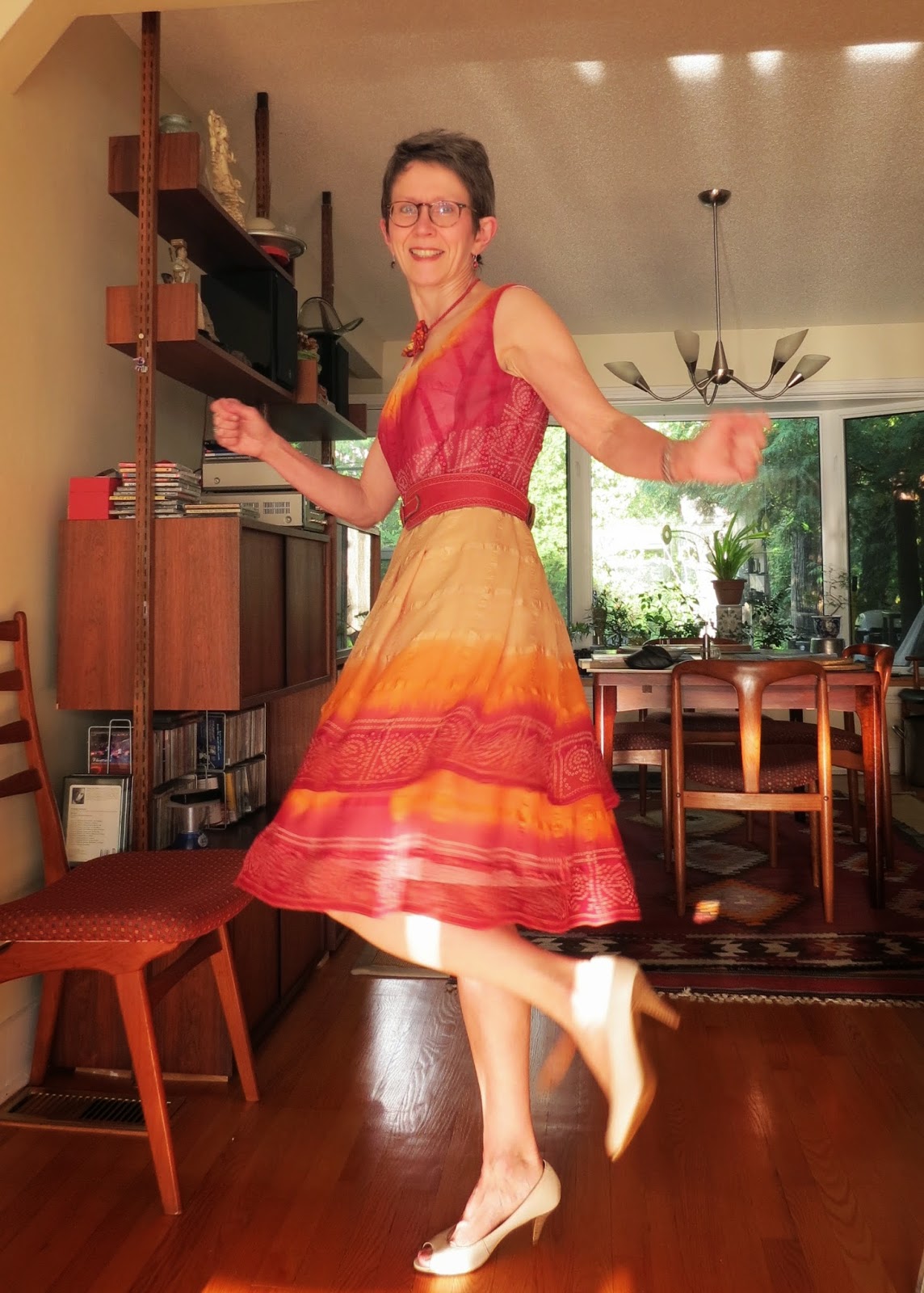 The skirt has twirl!

The end is in sight

You may ask ... what on earth is taking The Sewing Lawyer so long to finish her volcano and sari-inspired version of Vogue 1353?

A family visit to Alberta intervened.  Snow was experienced.  {{{{{Shudder}}}}}  Too soon!

But this summery dress confection must continue apace, because it is to be worn at a wedding in October, in the wilds of Nevada.  Well, Las Vegas.  I hope it will be quite warm enough there in October for this dress (reassure me in the comments).  I'll bring a wrap.  Just in case. 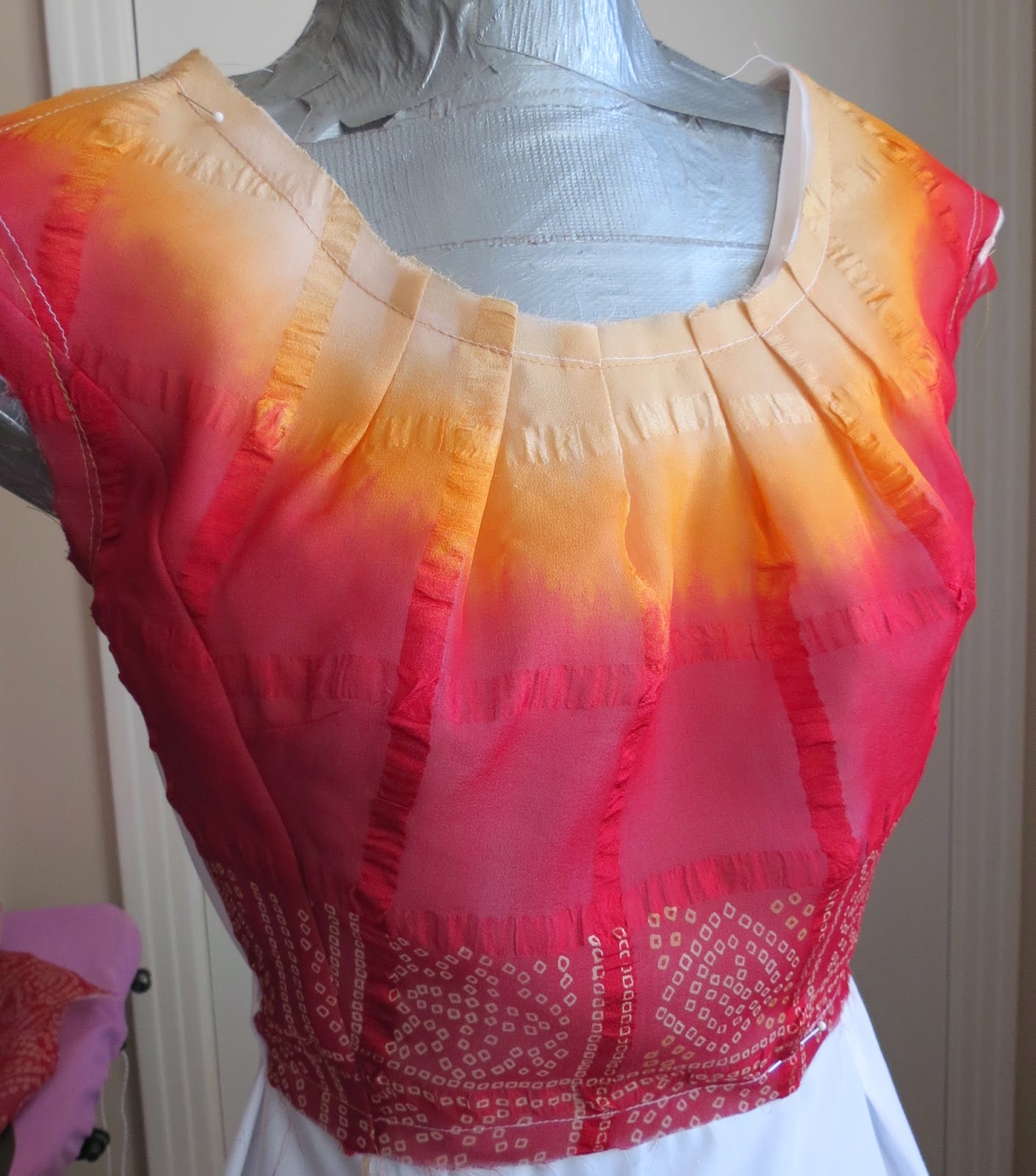 Anyhow, progress.  As you already know, the bodice was pretty much done before we left.  I underlined the very flimsy sari fabric with silk organza which stabilized all those pleats but did not threaten to make the bodice too stiff-looking.  At right, admire again how nicely the pleats gathered the curve of the sari border into the neckline. After this, I finished the neck and arm opening edges with the lining (firm poly-cotton fabric).  So far so good.

I cut out the skirt out before I left, because I was on a roll and I find having to make decisions immediately upon resuming a project after a hiatus is a recipe for disaster. So I decided on the finished length for the skirt by trying on the bodice/lining combo, and scientifically dangling a tape measure from the waist seam to where I wanted the skirt to end (knee length, longer than the pattern).  Since I am using a border print, I wouldn't have the luxury of cutting it too long and turning it up to the right length.

I also decided to cut a shorter second layer of the skirt as an overlay, since (a) my fabric is very sheer and flimsy, so a second layer would beef it up and (b) without doubling up the border visually, there would be too much boring beige in the skirt.  The length of the over layer was dictated by the fact that I had to cut it along the same border of the original sari as the under skirt.  This was dictated in turn by the fact that the printing of the opposite border was really bad - it is printed very off grain.  VERY luckily, the length of the sari was *just* enough to permit me to cut an over skirt.

Finally, before I left I marked the pleat lines on the under skirt and neatly folded all my pieces on my cutting board to await my return. 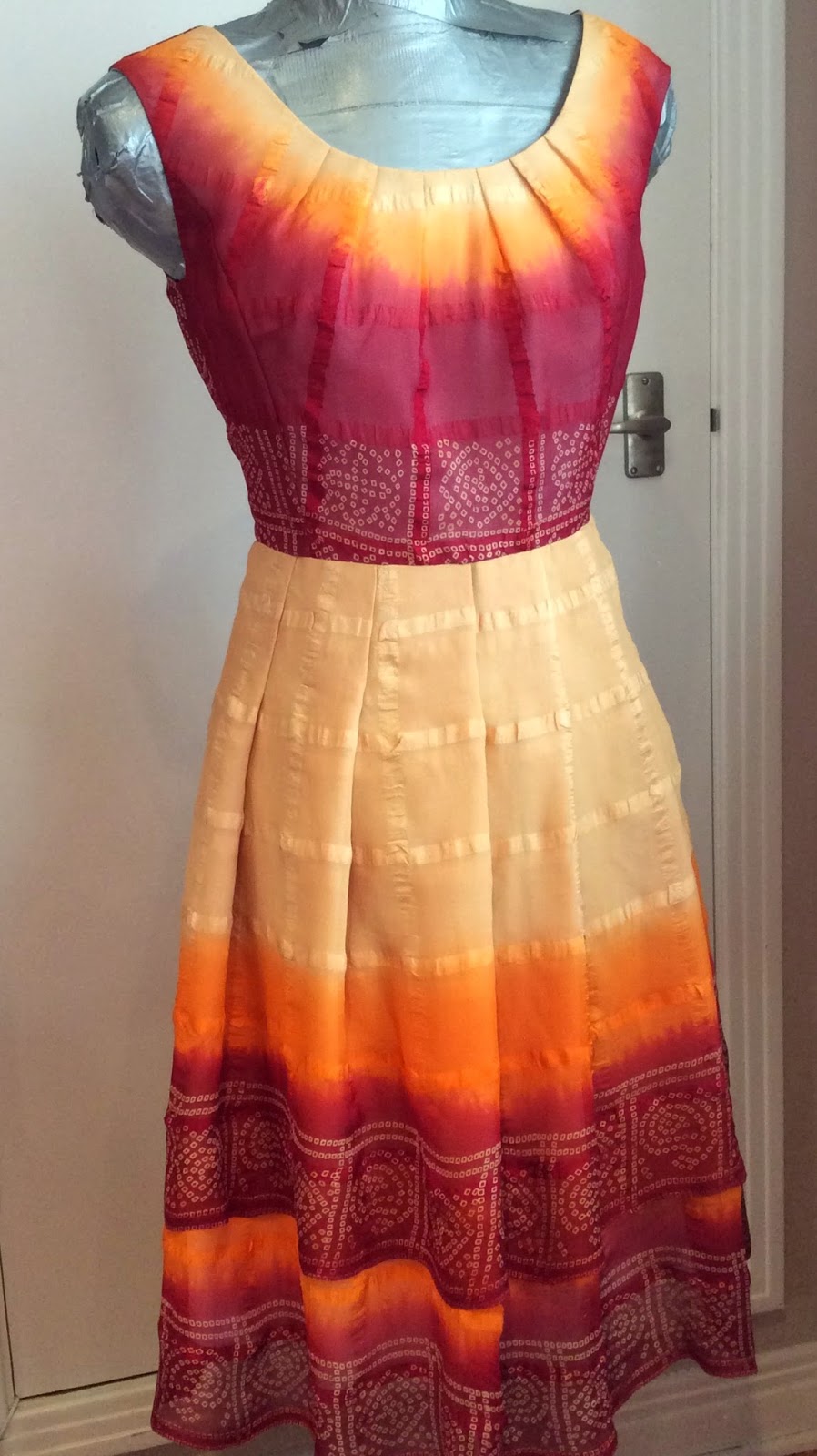 On my return from our trip, and after the post-travel jaggedness wore off, I was pleased today to be able to execute decisions that had already been  made by a previous version of The Sewing Lawyer.  However I was pretty irritated at her lack of precision in cutting.

I sewed the side seams in the under skirt using French seams (first pass a narrow 3 thread serger seam, a technique I'm loving), laid the shorter overskirt on top, and basted the pleats through all layers.  Then I threw caution to the winds and attached the skirt to the bodice.

It actually worked, and it's the right length! Clearly it will need a belt (and a zipper, my next challenge).  But it'll be fine if nobody looks too close at it.

Luckily, since I'm just attending somebody else's wedding, this is practically guaranteed. 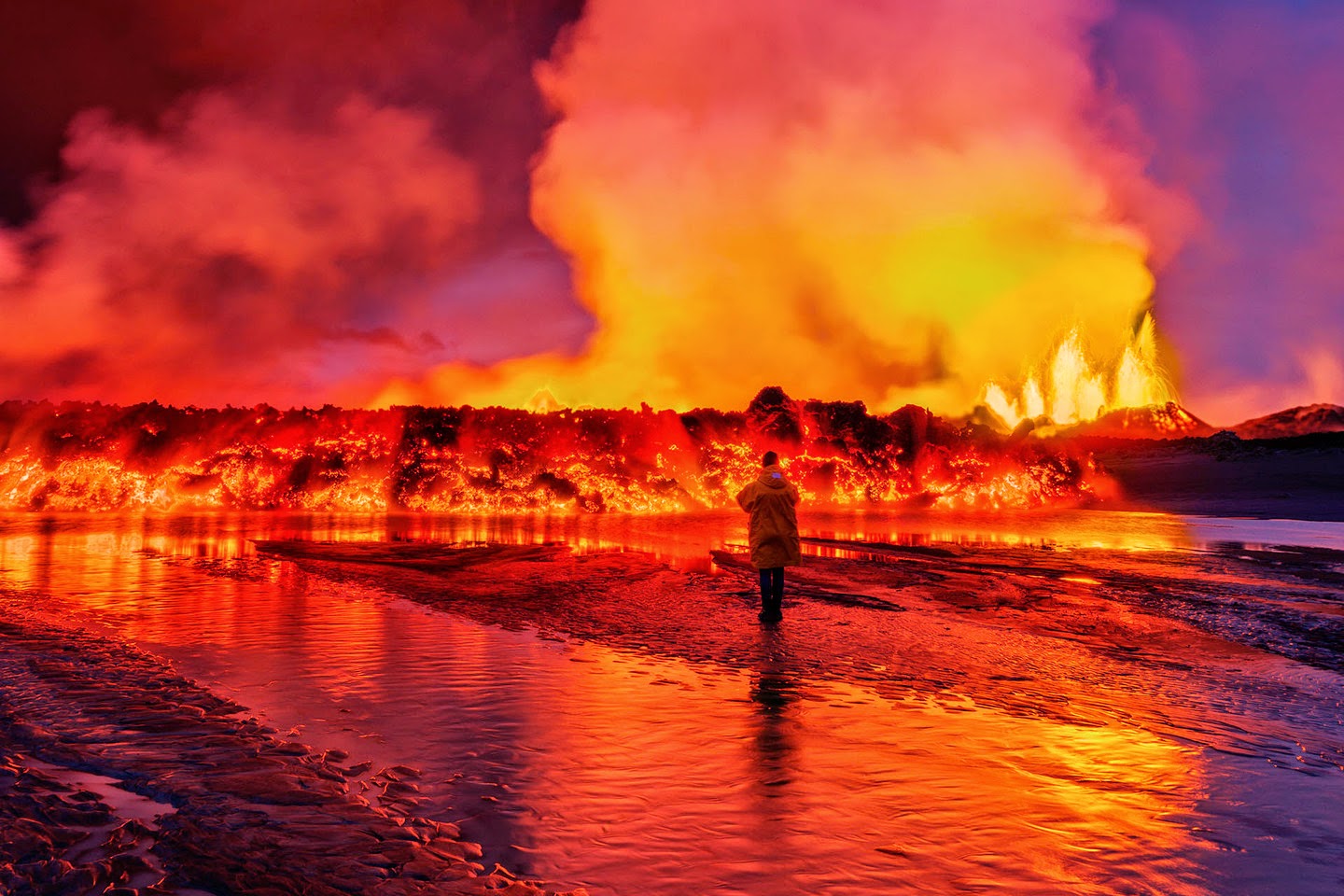 The Sewing Lawyer is happy to take advantage of unavoidable destiny.  Which seems to capture the relationship between Vogue 1353 and my sari fabric.

How else to explain this match of curves? 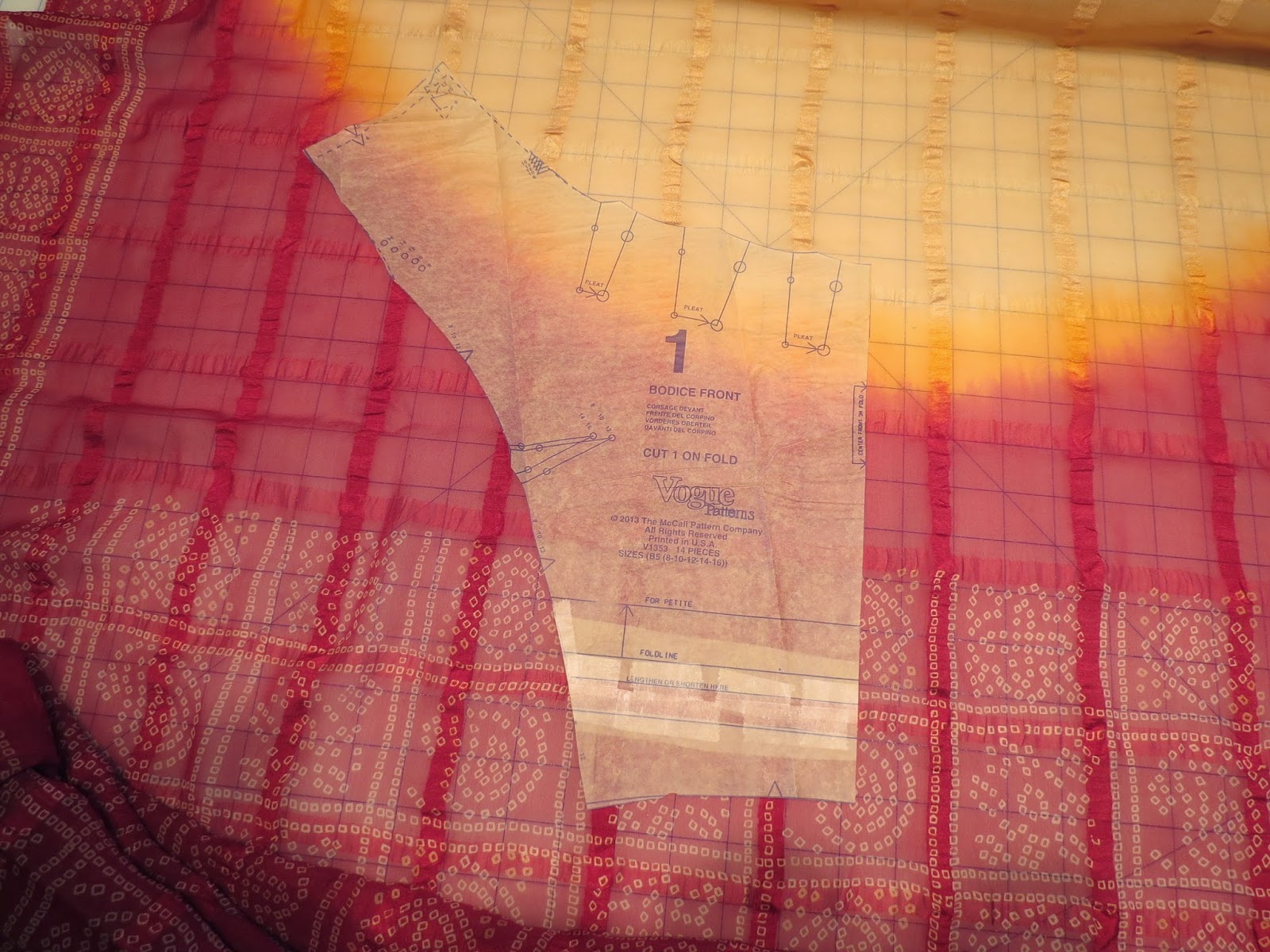 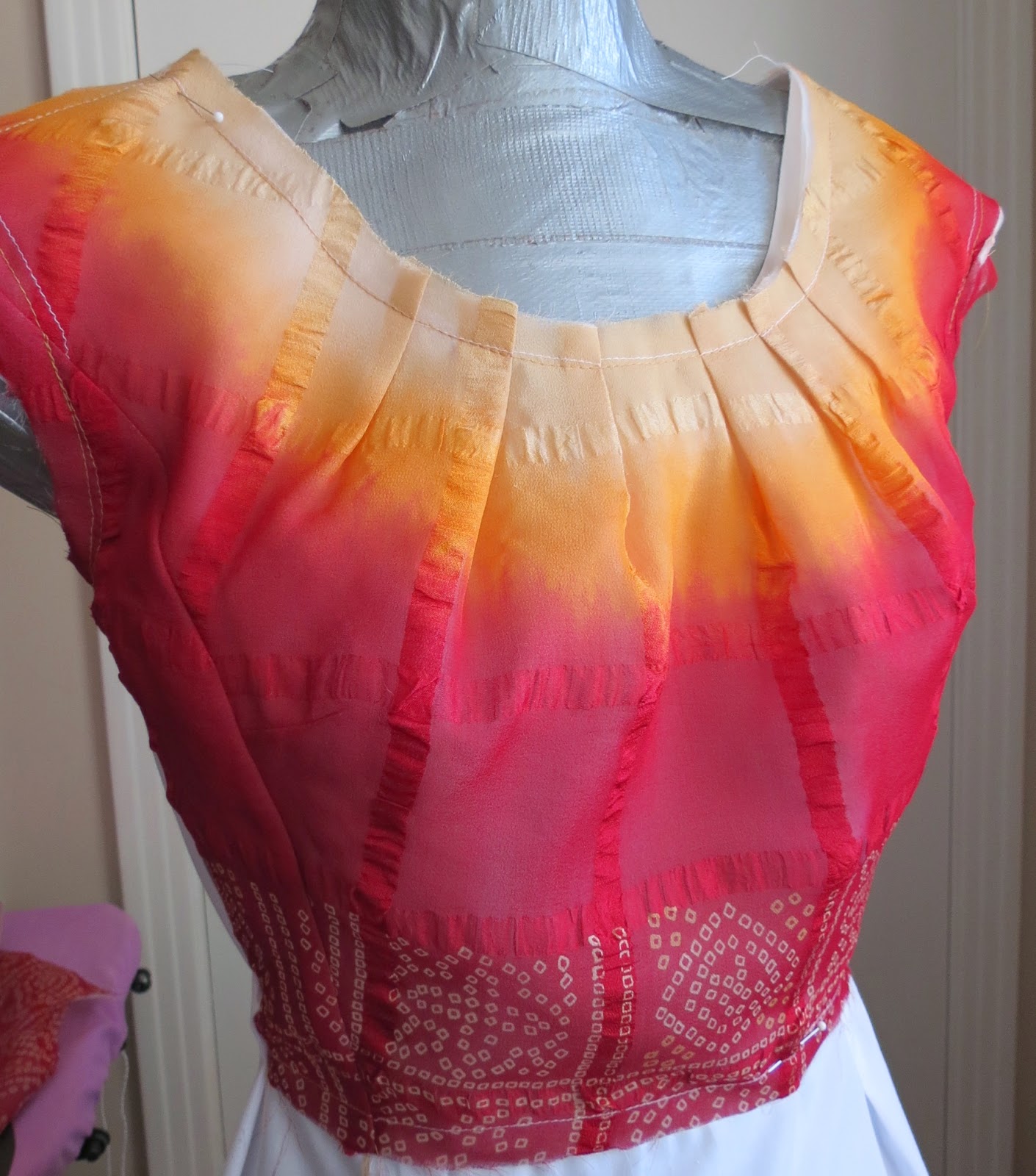 Here is my partly finished bodice.

To give the fairly close-fitting bodice some strength, I've underlined my very soft and drapey silk with silk organza. I'm also using organza as interfacing, and will face the skirt hem with it to give it a bit more body.
The lining will be the white cotton/poly dress that the bodice is pinned to.  I also used it for fitting purposes.

Speaking of which, when Vogue says that the waist seam is "slightly above" the waist they are not kidding. I added 1.5cm of length (5/8") and it feels a lot more comfortable.

I also raised the back neckline about 5cm (2") and narrowed the bodice upper back by about 2cm.  Many reviewers noted that it is rather broad, and on me the back neck gaped and the bodice felt uncomfortably loose.

The back of the bodice is cut in the red squares part of the sari.  The skirt remains to be cut.  First I have to figure out exactly how long I want it to be. 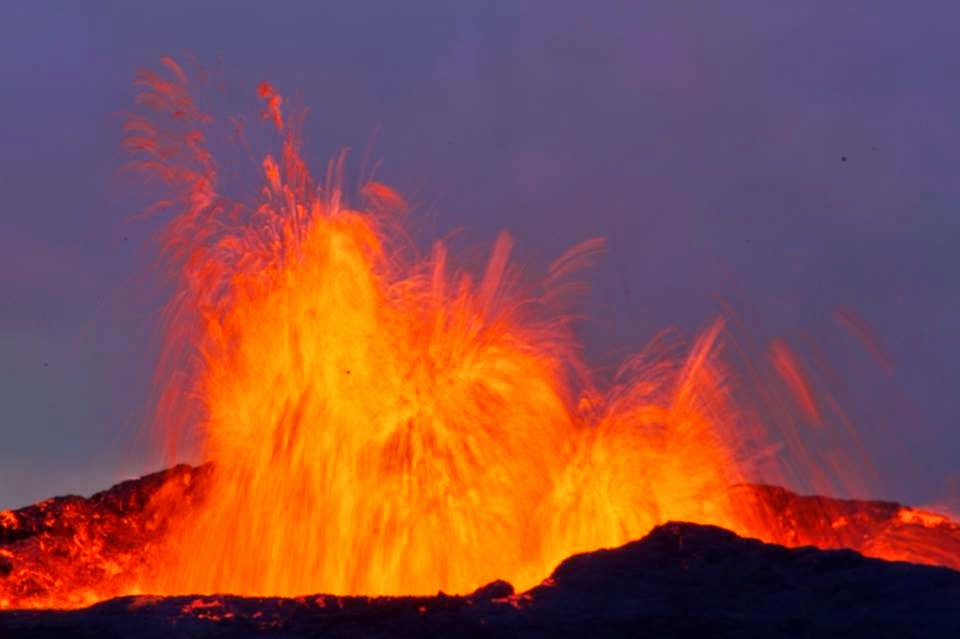 Maybe I'll call it my volcano dress.  While I'm sewing, I'm keeping tabs on Bárðarbunga, the Icelandic volcano that is giving rise to the current fissure eruption.