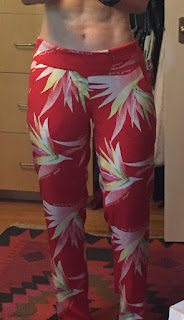 I am not only on a Jalie kick but also on a red one apparently.

I went stash diving for the Vanessa pants too. First I found some rayon challis I had forgotten about and decided to try this pattern in my least favourite of the prints.

So I present (at right) my red Bird of Paradise Vanessas that are TOO SMALL. I did not finish them. I found out (Facebook Jalie group, very helpful) that there is a big difference in the rise between the size R (my waist) and bigger adult sizes. I had cut the T at the hip but graded to the R at the top edge. My mistake.

For my second try I cut some mystery sueded woven which is very drapey and also seems to be mostly rayon. This time I was cautious, perhaps overly so, about the sizing. I cut a U as my hips are between T and U, figuring I could take width out at the side seams if it was too big. I did take some out near the waist. I probably should have just cut the darned T (next time).

I didn't do the waistband cord.

I added 2cm to the length because I thought the pants as designed are on the short side.

They are comfy but not beautiful. Too hot for July, but come fall I could see these as go-to weekend pants. I could also definitely imagine more pairs of these...
Posted by KayY at 6:13 PM 1 comment: 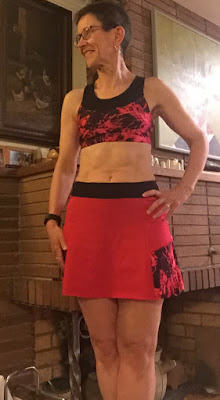 I went on a Jalie spree recently. I fell for several (actually 5) of the newest pattern releases. And I've made four of them! I reviewed the Rova dress most recently, but in the intervening month and a half (bad blogger!) I also made the Pika top and the Loulouxe skort for working out in. And the Vanessa pants - for the next post.

I would not normally think of making myself a skort like the Loulouxe, cute though it is, but I took up "running" and I thought a little skort would make me a little bit happier about this activity.

("Running" is in quotation marks because I don't like it and I am very bad at it. However I got a 5K run app and let it lead me from short run-walks to a full 5K run. I still don't like it, and I'm still not good at it, but I am able to do it. I am doing it because I think it's good for me. I work out regularly and I eat sensibly but I was noticing some flabbiness creeping in and some clothes were getting tight, and we cannot have that. No sirree! But I digress.)

I dug deep in stash and found some RED nylon/lycra (I think it is "Italian lycra" because one side is quite shiny; I used the more matte side) and some red/black fiery print nylon/lycra (very beefy) and some black stretchy stuff of greatest mystery. I don't consider myself a natural colour blocker but the Jalie workout patterns are designed for it so they make it relatively easy. You can judge for yourself; I think my choices are fine. 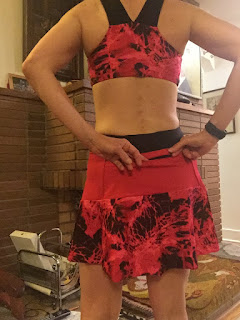 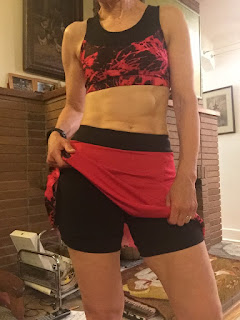 There is not much to say about the Pika top except that it is fantastic! Easy to make, fits great, very secure, all the instructions are perfect. This is a very comfy sports bra.

As you can see, I didn't make the tank overlay. I don't love how it looks and for working out in summer, it would be hot. I may do another version with a mesh overlay. Thinking about it. (HAHA maybe next year.)

As for the skort, I have a few comments. First of all, the fit. Compared to other Jalie tights/shorts (like the Coras, which I have made a couple of times), the shorts under this skort are much less snug. This is not a problem but it was a bit of a surprise given how other Jalie bottoms fit. The shorts are also very short. Based on how I felt about the length of the Coras (I lengthened them the second time I made them), and knowing that these shorts were a lot shorter, even with the leg band, I lengthened them by 2cm. I didn't want them to be longer than the skirt and figured they would be ok. They are in fact ok. If making this again, I might lengthen them another cm however.

I decided to leave the hem of the skirt raw to maintain length. I would if making this again add 2cm to the skirt and turn up a hem. When I first made it the lycra was behaving well but after washing it a couple of times, it is rolling up at CF. It is not bothering me enough to make me decide to hem it though (yet). I like the length as is.

For the waistband of this skort, at least in my fabric and because of my pocket (described below), 1cm elastic is not sufficient. This thing is a lot heavier than shorts or tights, and it moves more because of the design and the ease, especially if you are "running" in it. Jalie calls for 1cm elastic at the waist, and because their instructions have always been excellent on elastic, I followed it to the letter. But when I wore it, it was definitely sagging unattractively at CB. Today, I retrofitted the back waist by adding a length of 2cm elastic from side seam to side seam. It's ugly but I hope it works. If I make this again, I am using 2cm elastic inside the waistband instead.

So the pocket. As designed, there is a pocket in the leg of the shorts. This would be fine if I was stashing something in it that I didn't need access to, but I am using my iphone when I "run" and need earbuds, and they have a wire. So I wanted a more accessible pocket. (I did not make the leg pocket.)

Dawn put a pocket in the centre back portion of the Loulouxe skort. This is totally the right place for a pocket and I was going to copy hers slavishly, but I did not have a long enough zipper. So I improvised with a shorter skirt length zip. 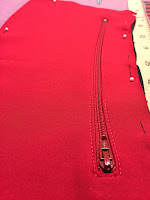 I cut two of the piece instead of one (inside is black, outside red). I added some fusible knit interfacing to stabilize the area where the zip would go. Then I made a cut parallel to the curved upper edge, just a bit shorter than the zipper, and two angled cuts into the notional corners of the curved but vaguely rectangular opening I was planning.

Basically this is a window opening for the zipper. Check out this tutorial, for example. Except I did not make a "facing" for the window. (You could of course, but I was winging this.) I just sewed the edges of the zipper tape to the edges of my cut opening, and fudged the ends by turning the little triangles under and then topstitched it all to keep everything in place.

Once the zipper is installed, then baste the edges of the outer pocket piece to the back pocket piece and thereafter treat them as one. It works perfectly ... except my phone pulls down the back of the skirt, which meant the elastic wasn't enough to keep it in place, which meant I had to retrofit the waistband. But it's all good.