Here I am again, sewing a Jalie pattern. This time it's Michelle, another one of the patterns released this year. The pattern has two views, a top and a dress. I'll leave the dress for others - I made the top. 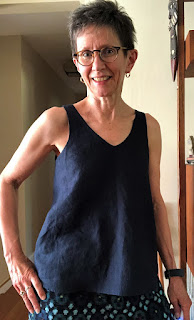 First I made it as instructed in navy linen. The top is supremely simple - it has two pieces and they are not front and back, they are outer and inner layers. The front and back are identical. The inner layer is a long facing with the same upper shaping as the outer layer - it's just shorter. If you are using a sheer fabric, you cut four of the outer layers. In this non-see-through fabric I chose the short inner layer option.

The top is cut on grain. It falls a little stiffly in my linen but is very pleasing and really cool.

If making this on-grain again, I would make a modified piece for the back. I'd cut the neck line higher in back and I would consider making it a tiny bit wider. The straps are cut so that on me, they are pushed out away from the neck. This causes the centre of the piece to flare out somewhat. I'd like it to lie a tiny bit flatter at the back. However it is very wearable as is.

FYI I cut the pattern on the lines for size R through the neck and arm openings and graded out to S at the hip. This adjustment was totally unnecessary, as the top is very roomy.

Based on how this fits I thought it would be fun to try the top cut on the bias but without any other pattern adjustments. I have lots of very light weight white linen which is semi-sheer, so after I made a full piece (tracing another half and taping it to the original at the centre line) I cut out four pieces, single layer.

Some quick on line research indicated that I should cut two layers at 90° to each other. As this site explains: 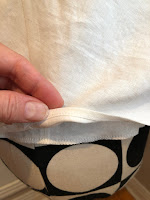 To stabilize the strap-neckline-armscye area, I cut very lightweight fusible interfacing in a facing shape and fused it on the inner layers for front and back. Then I sewed each interfaced layer to an uninterfaced piece, with the interfacing side up so the edges would stretch as little as possible during the sewing.

I made a baby hem on the outside and just serge finished the under layer a little bit shorter. 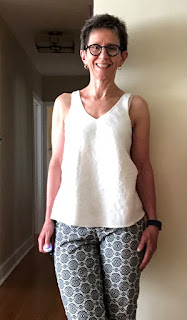 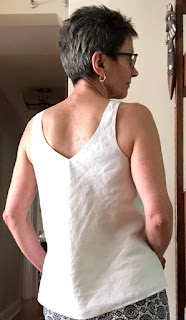 The bias cut does not make as much of a difference as I expected to the look of the top. It flows a bit more over the bust, but the back is still forming a sort of fold at CB.

This is a great hot weather top!