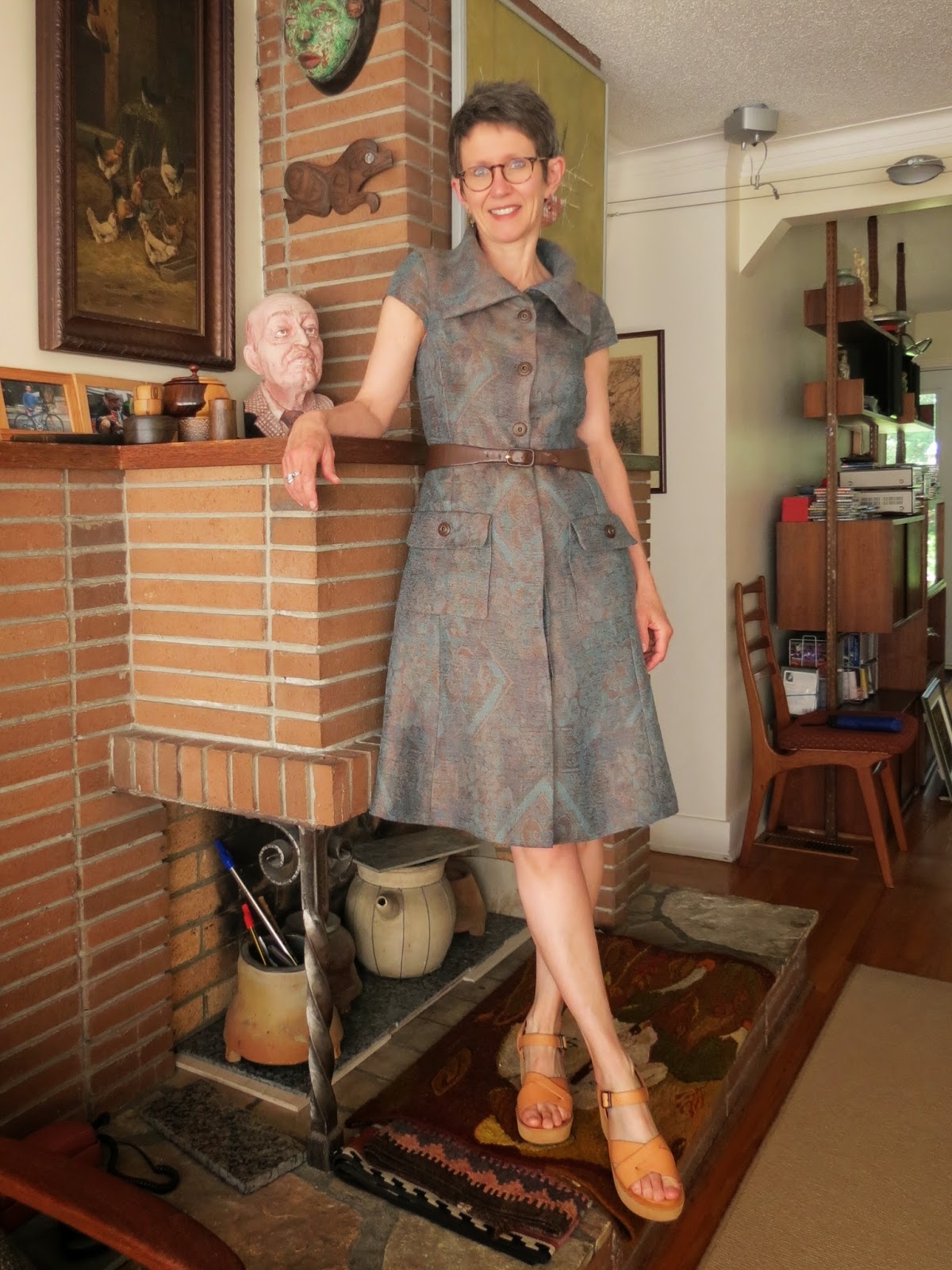 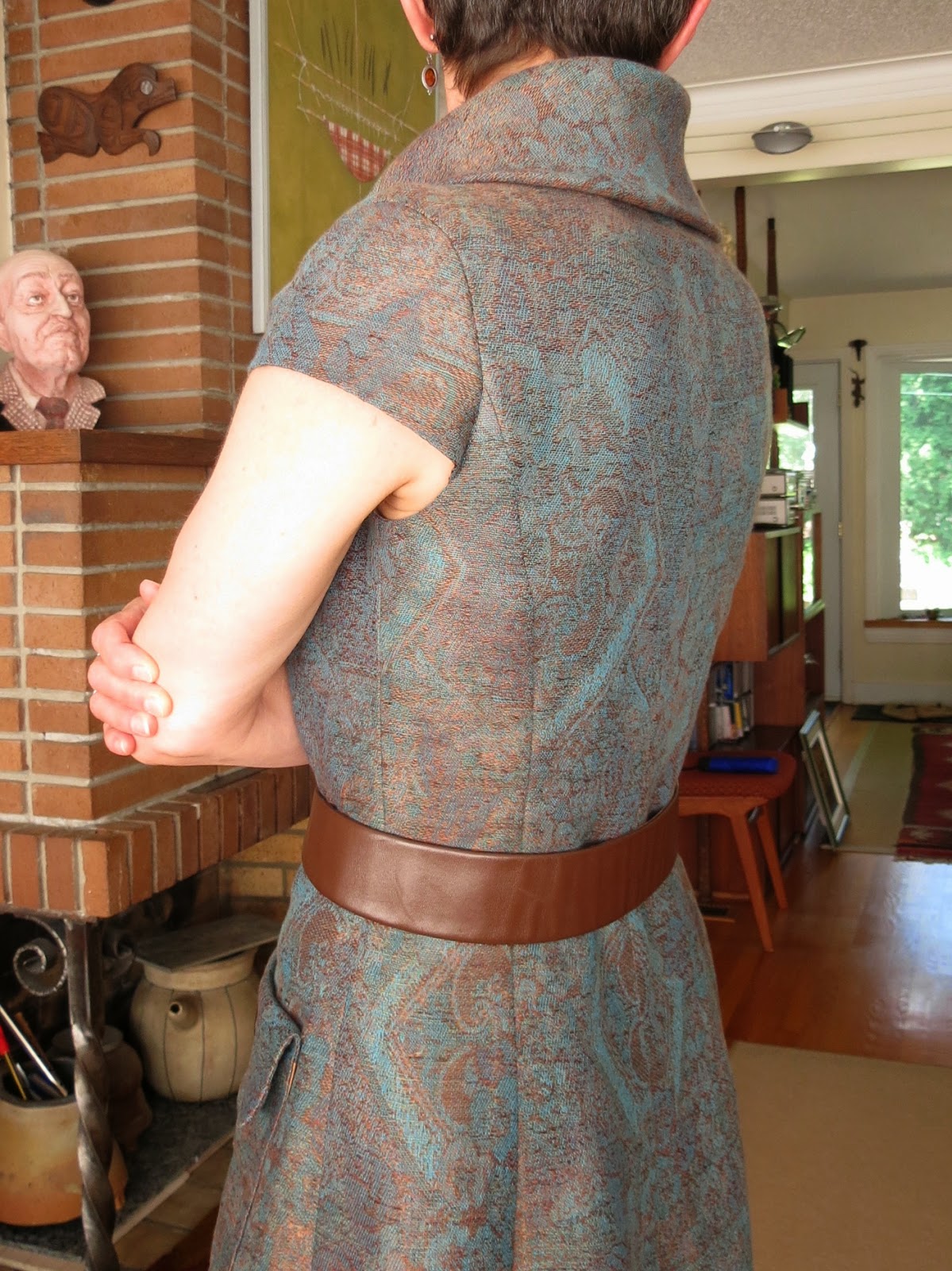 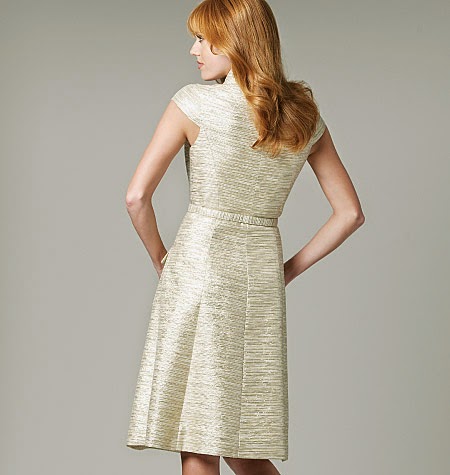 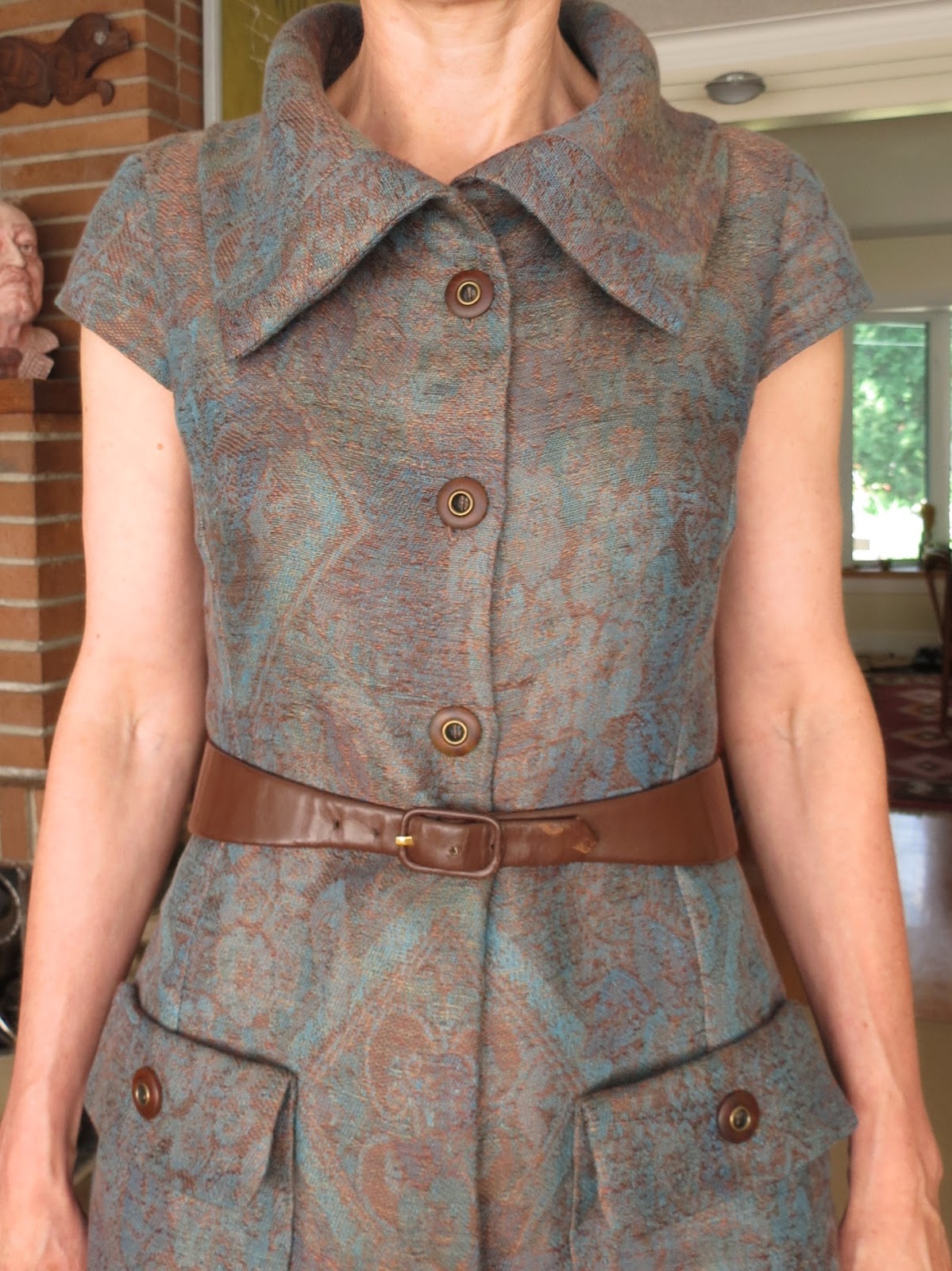 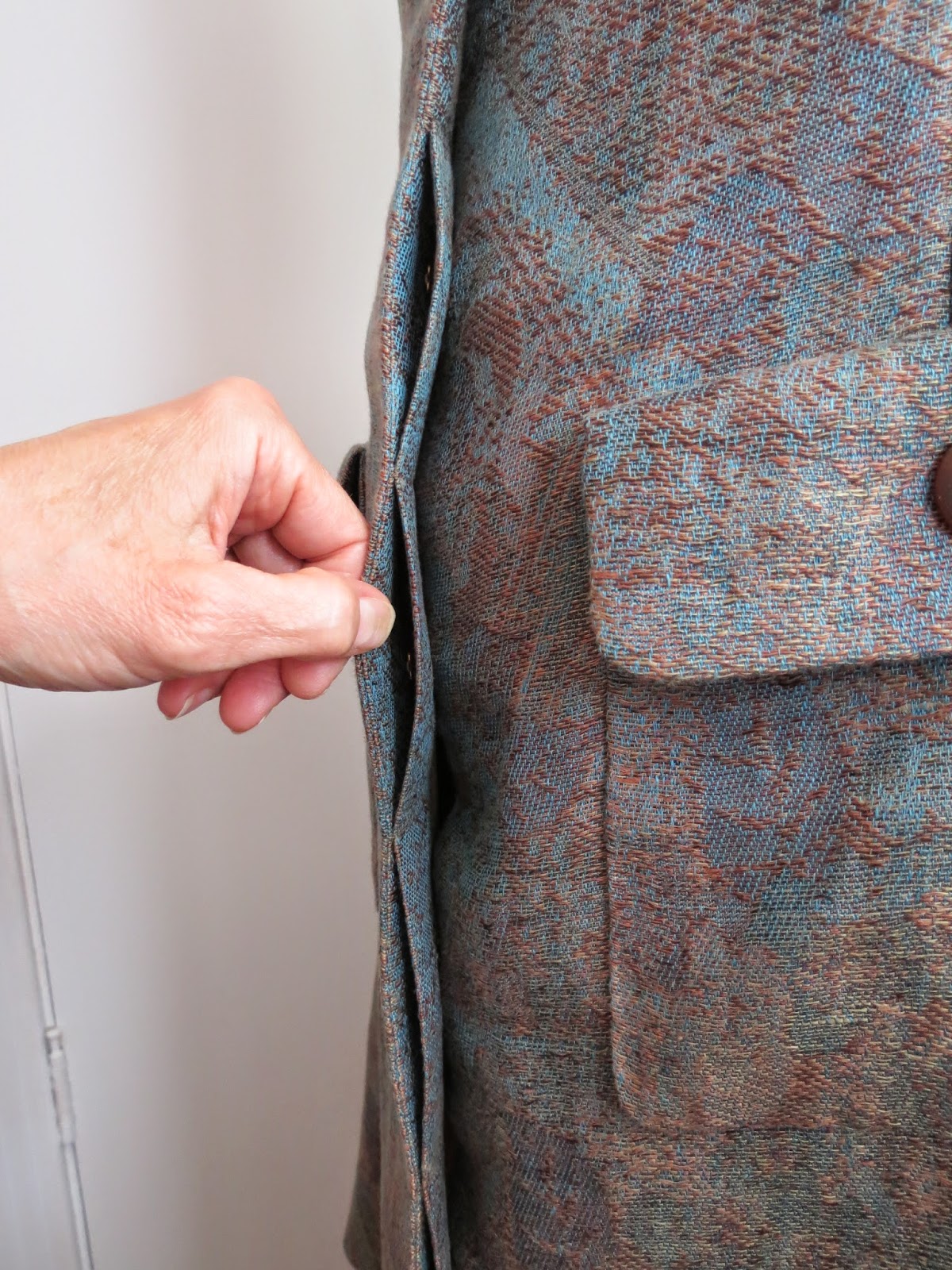 There's a reason for my delayed progress

The Sewing Lawyer was in Iceland!  Literally, it's the land of fire and ice. 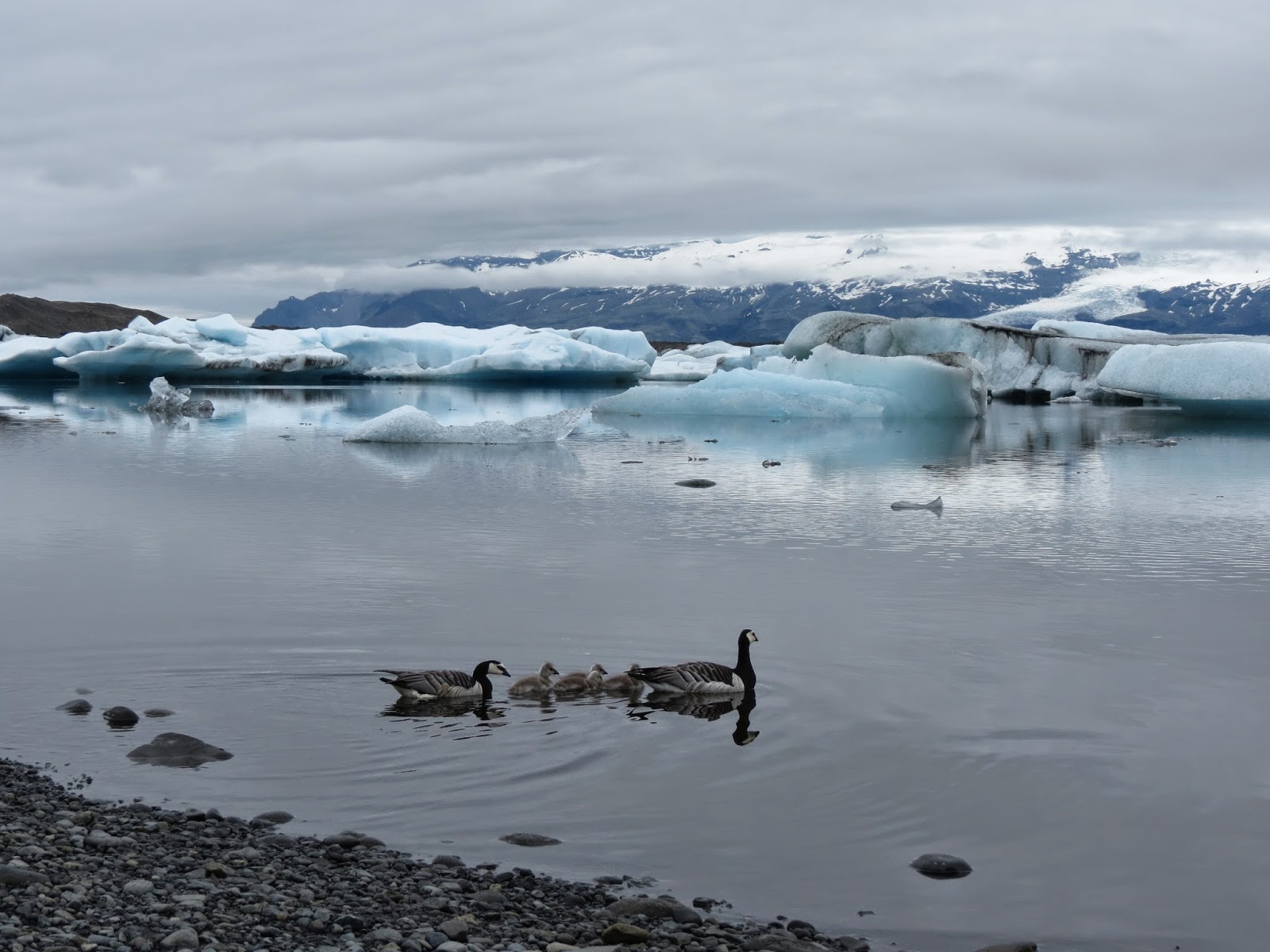 In between it also boasts beautiful canyons, unbelievable waterfalls and bathtub temperature rivers.  My camera was my constant companion.  It's a very photogenic place!

I've had the fabric in stash for a long time.  It was a Fabric Flea Market find and is of undetermined content, although I am betting on a linen blend.  It creases and it frays. A lot of both. 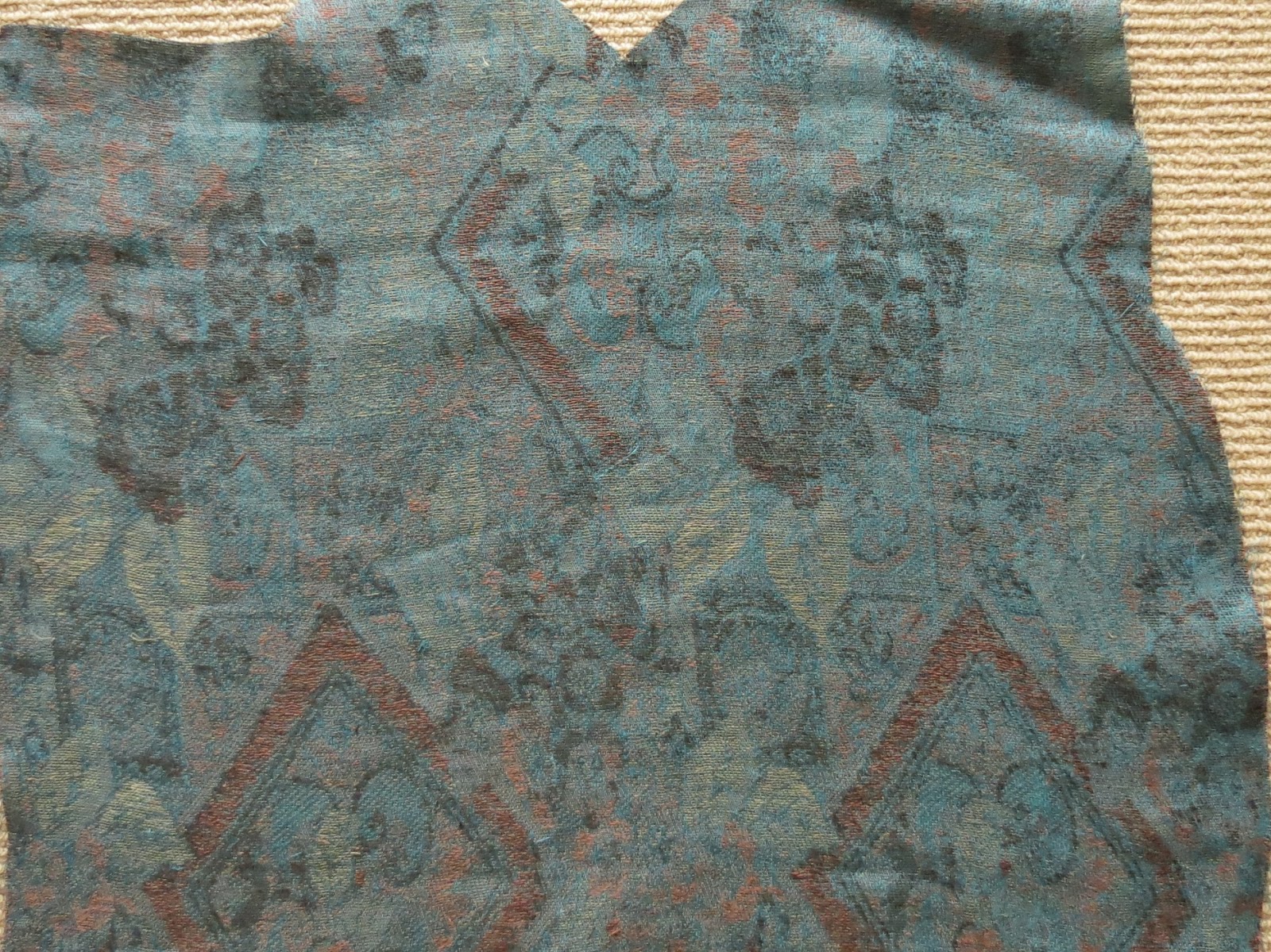 But it's very pretty.  I think I haven't used it all these years because I was conflicted about the right v. wrong side.  I am pretty sure that the originator of this fabric intended the greener side to face outwards, but to me it looked like not very likeable upholstery. 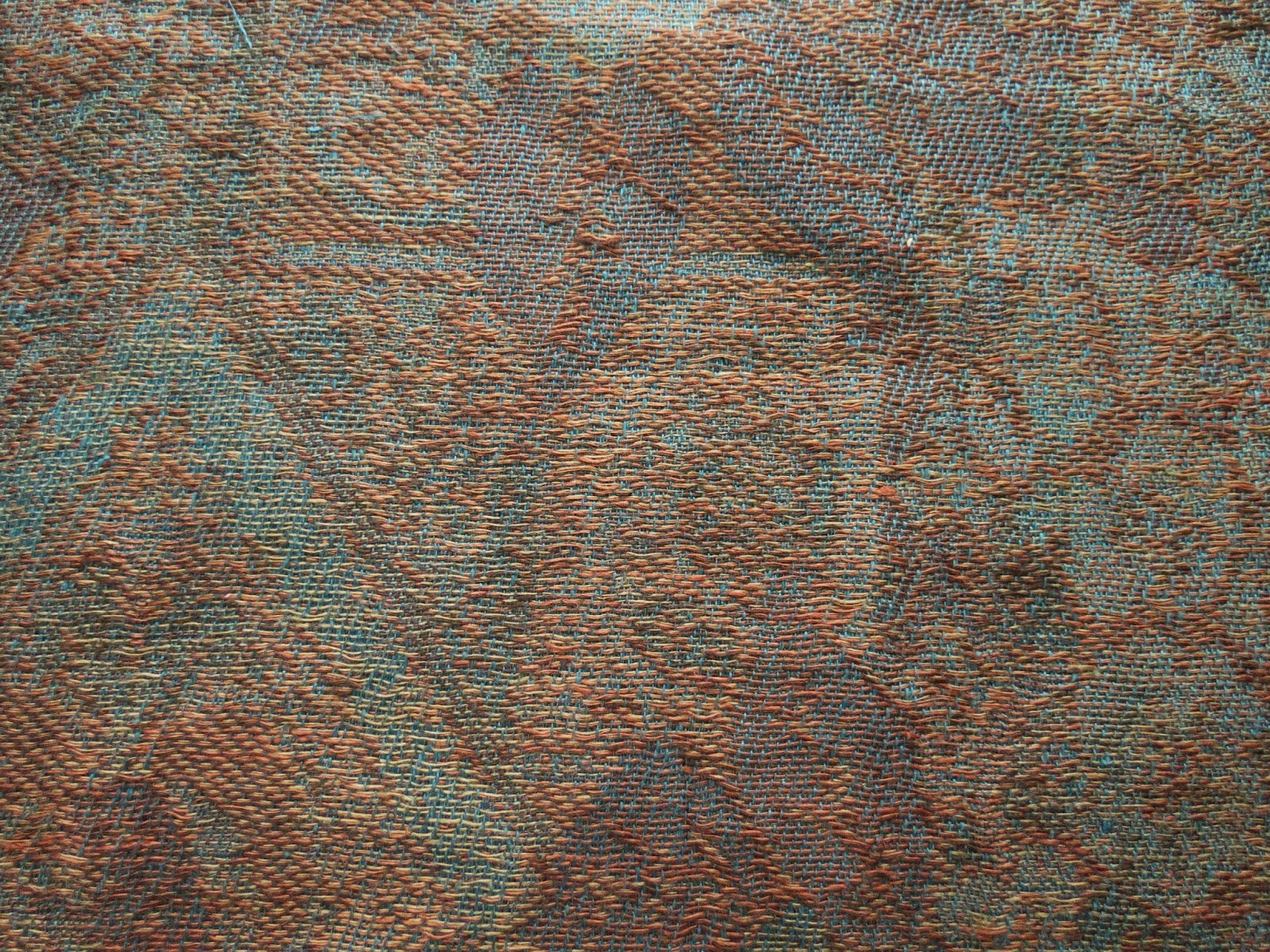 I'm favouring the reverse, where the green is in the background and mysterious rich browns dominate. There is a large pattern repeat and I spent too long contemplating where the diamond motifs should land on my body.  Or maybe not long enough.  I am pretty sure that the beautifully matched large diamond on my belly is less obvious in real life.
As for fit, I decided to shorten the entire dress by 1 cm above the waist.  This was so obvious but I didn't see it until I read through all the very helpful comments.  Thanks to everyone who weighed in!  Re girth, I decided to adjust on the fly rather than go to a smaller size.  I've decided that the front fits well enough (except for that odd wrinkle in the front shoulder area - which I think I will attack with some interfacing). However, I need to take the entire CB in above the waist.  This is such a constant issue; I guess I should just face up to my narrow back.

Gearing up for a new dress

The Sewing Lawyer has two important reunions to attend this summer and feels like a new dress is required for at least the first one, later in June.  Vogue 1233, a 2011 dress by Pamella Roland, is on the agenda.

Here's the pattern photo, front and back.  Why are there only a couple of reviews of this dress on Pattern Review I wonder? This dress needs to be fitted so it falls smoothly without being tight.  So, even though a fit and flare dress might seem pretty fool-proof, I made a half-muslin of the bodice, down to the hip area, cutting a straight size 10. 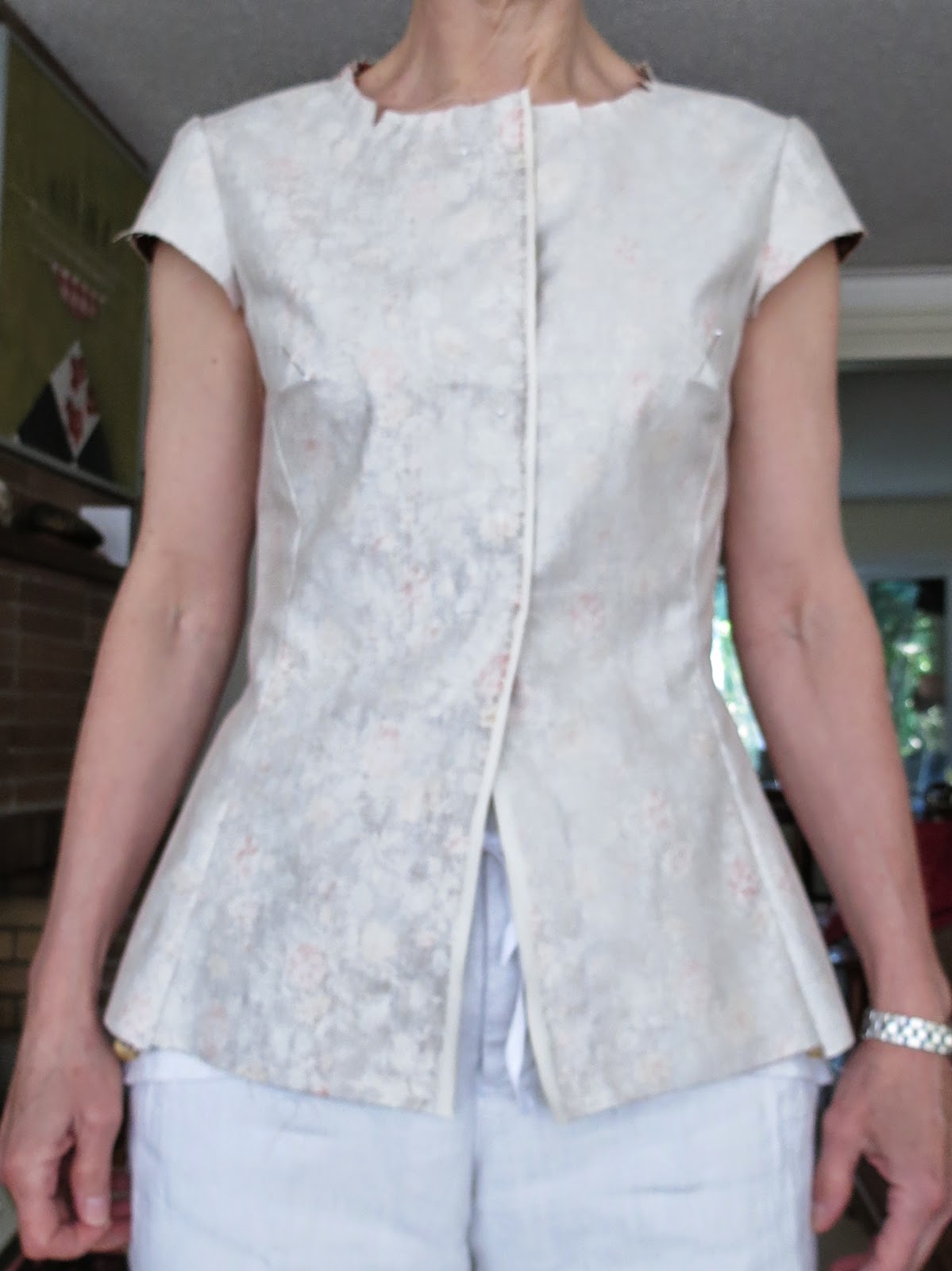 So the front.  The dress has princess lines that run to the side, away from the full bust.  There are short bust darts running horizontally from that princess seam.  They looked really weird off the body, and slightly less so on.  I have to move the point in and up, by less than 1.5cm in each direction, to get rid of a little poof that hits below where it ought to.  So my dart will be longer, and angled slightly upward.

But the most obvious problem is that the CF is not hanging properly.  Below the waist, it's opening up all by itself.  This isn't, by the way, because the hips are too tight.  The CF is too long above the waist.

It's less obvious from the picture, but the side seams were also too extremely curved in at the waist, even though (again) the total circumference of the dress fits ok. 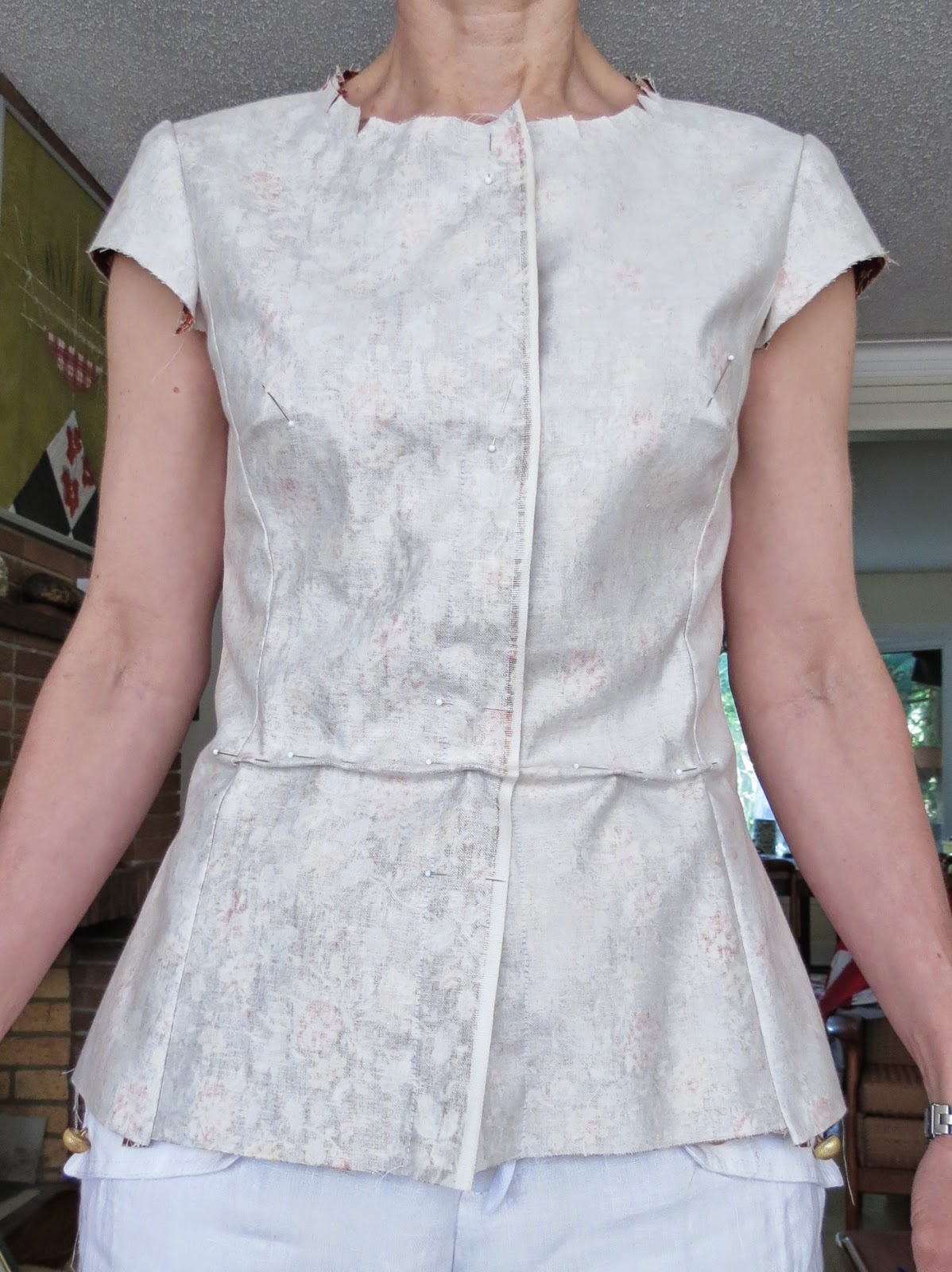 To fix the length in CF, I pinned a wedge from the CF edge to the side seam.  It's about 1.2cm wide at the widest point and tapers to nothing.

I also sewed a less extreme curve at side seams which relaxes the fit overall.

I have a question for you experts out there.  Once I take a wedge out of CF, the front edge is no longer on the straight grain.  My hunch is that this is irrelevant.  I've adjusted the facing pieces accordingly, and I will stabilize the CF edge with fusible tape to make sure it doesn't stretch.  But if anyone out there has had a bad experience with this adjustment, please pipe up in the comments! 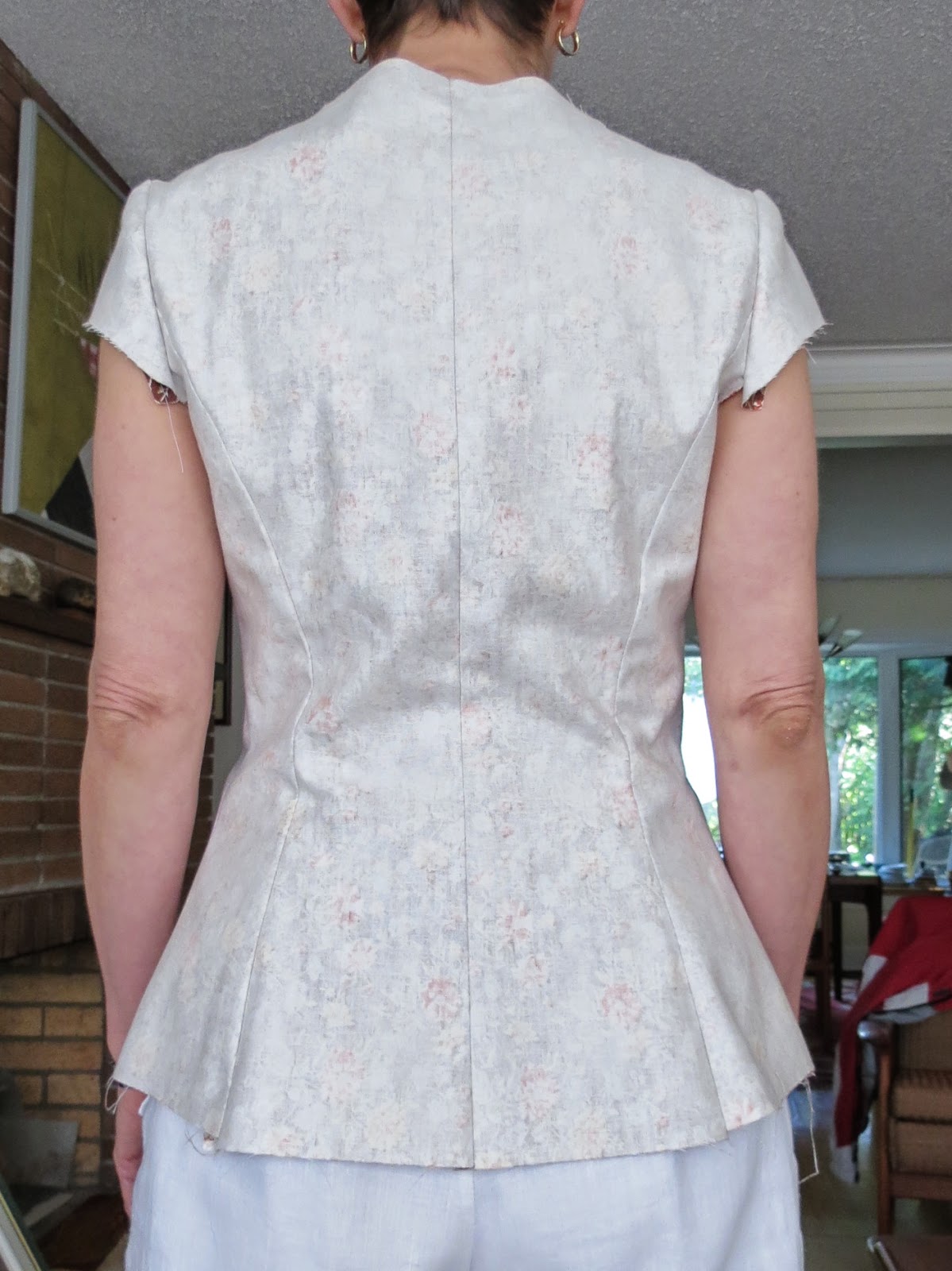 In the back, it looks too big through the mid back, but mostly too long.  The upper part of the princess seam is also a little poofy.

I'll fix the CB length problem by taking a wedge out of the CB panel, 1cm at the widest and tapering to nothing at the princess seam.

And what is going on at my back neck?  Dowager's hump???  I may have to take a little dart there.

I like the finished length of the sleeves as is, so will add a bit of length there.