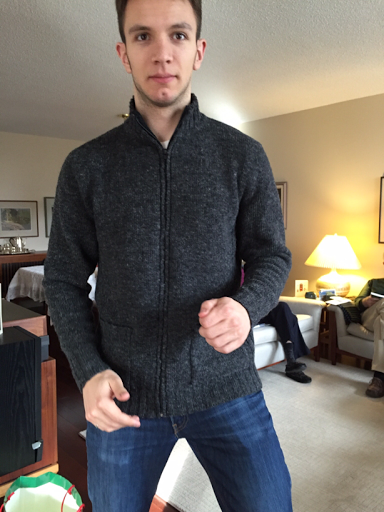 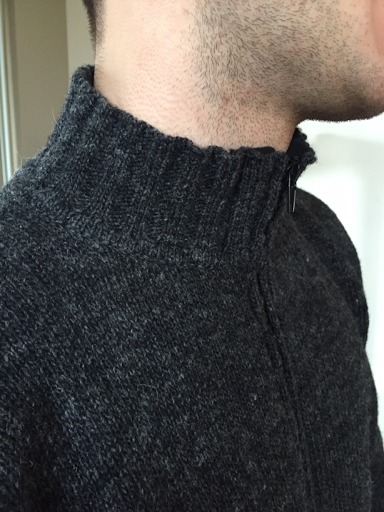 This one is more complicated. I made a zipped cardigan for my son (details on my Ravelry page). The yarn is Briggs & Little sport in a dark grey. It's a one ply with a manageable tendency to bias. It is very rustic, complete with bits of what looked like wood and straw, and wild hairy bits. Off the skein it's oily and stiff but washed, it has a fluffy but very seriously woolly quality that I like. It left my Passap full of lint. Maybe I should plan to do a deep clean once a year...

A nice variety of things went wrong with this project:

By the light of day it was obvious I should frog back because he would not like a sweater that was too long and let's face it - if you have a knitting machine, reknitting is a lot easier than connecting two bits of knitting invisibly by hand. And in the end it was really fast; so not worth losing hours of sleep over.

Given all of this, I'm really pleased with the finished project. I managed to go straight from the ZZ cast on row to a 3x2 ribbing pattern (this involves lots of transferring stitches between beds). I managed to knit ribbing up through the body of the sweater without any obvious gauge problems (I knit the back bed purl stitches on stitch size 6 when the front bed was SS 8).

I accurately (subject to my mistake noted above) graphed the pattern and worked from these diagrams.

I can knit anything!

But the source of most happiness is how well the collar turned out. The pattern called for a standard hand knitted collar which in part (at CF and CB) was knitted straight from the body pieces rather than from cast off edges. The collar is in the 3x2 rib pattern and doubled (i.e. knitted 12cm, then the cast off edge is sewn to the neck edge on the inside). This would make a facing to hide the top of the zipper tape on the inside.

I wanted a single layer collar (2 layers of Briggs & Little would be too much), and I wanted it to attach the same basic way as the turtleneck of a commercially made cashmere sweater I own. See, there is a single layer of ribbing, and it is knitted directly to a few rows of stockinette - both inside and out - and those stockinette stitches are neatly sewn together through the body of the sweater. Neat huh?

Except I am lacking the machine (a linker) that does this kind of sewing, and I wasn't 100% sure how to knit the little stockinette flanges directly onto the ribbed collar.

But I did it! I'm so chuffed! For anyone with a Passap, here is how. After knitting the number of rows of ribbing I needed for 6cm, I filled in the missing 2 stitches of each purl column on the front bed by hanging the purl bump (from the row below) for the adjoining stitches on the empty needles. I did the same re the missing 3 stitches of the knit columns on the back bed, but I left the centre needle empty. Then I set the lock to knit circularly (CX/CX) at a stitch size between that of the ribbing (6) and the main knitting (8) - just to keep it a bit firm. I knit three rounds (6 passes) and then some rows of waste yarn.

To attach the collar, I hand basted the wrong side flange to the inside of the sweater neckline. Then I very carefully chain stitched the three layers together with a crochet hook, making sure the hook went through the matching loops of the last row of the Briggs & Little. I had to fudge a tiny bit at the CF edges to keep them relatively straight. Subject to that, IT WORKED PERFECTLY!

I sewed the sweater together and installed the zipper with my sewing machine. To keep the inside of the neck neat and make it soft, I added a little fleece facing.

You know Cidell? She and I egg each other on about machine knitting. I really like that simple striped cowl she made (four times) for the women in Jordan's family. I really like the same yarn; in fact I had used it for TS Christmas project the second. So I riffed off her project but instead I made a scarf for my dad.

I decided to knit my scarf flat but double width, and seam it along the long edge. I used the same needle pattern that I used for my mom's shawl; 3 in work, one out of work, etc.  I did a 1x1 rib at each end, and the fact that the ribbing is also in a tube is a little weird, but not unacceptable I like to think. 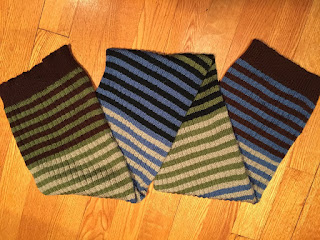 I went with five colours: chocolate, denim blue, sage green, grey and black and calculated how many stripes I'd need to get my desired length (not too long, said my husband) of 54"

I think it took longer to cast off (my achilles heel of machine knitting) and seam it than it did to knit.
Posted by KayY at 7:00 AM 1 comment:

You already know that I made my mother-in-law a machine knitted shawl. Flushed with my success, I decided to make a second one for my own mother for Christmas, but to "improve" the pattern to get rid of the curling edges.

Curl is built into any item that has any version of stockinette stitch right to its edges, where those edges are not stabilized by being sewn into seams. It's structural, and it causes the bottom and top edges to roll towards the right side of the item, and the side edges to roll towards the wrong side. (TechKnitter wrote on the subject, if you wish to study it in detail...)

So anyway, shawl #1, while lovely and purple, had ends and edges that rolled to an extent that (in The Sewing Lawyer's opinion) was excessive.

A swatch told me that if I added ribbing at the ends, and along the edges, I could cure the curl.

Compare the left and top (curling) and right and bottom (ribbed) edges.

I made the entire shawl like this. I will not bore you with the technical difficulties overcome, or the mistakes that had to be fixed/fudged. There were several of each. In the end, I had a cushy, seafoam greeny blue coloured shawl, with more or less flat sides (we can live with their occasional tendency to fold back to the wrong side), lovely corners and ribbed ends. 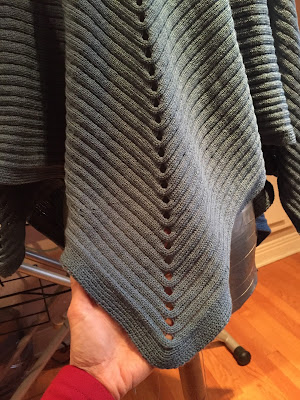 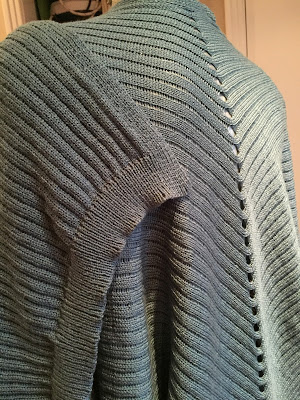 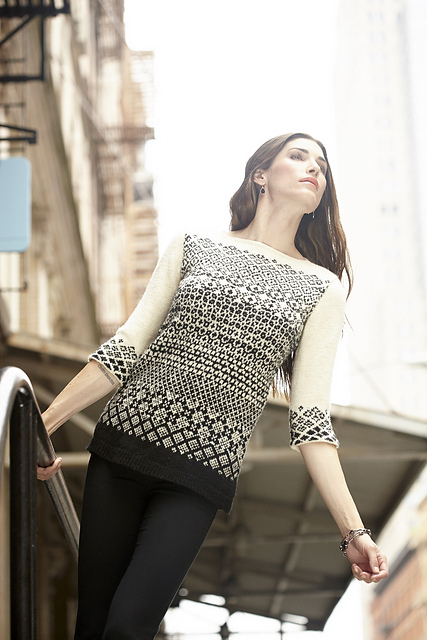 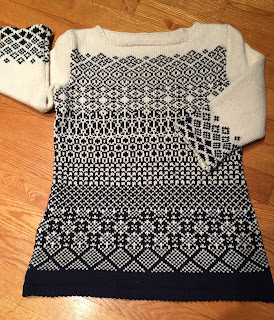 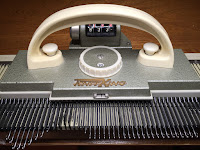