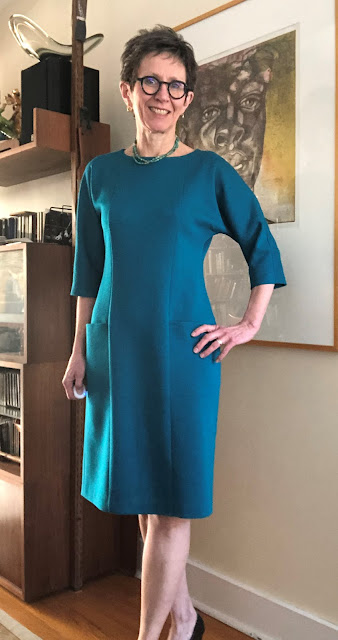 Once the fitting work is done there isn't much more to Vogue 9022. I was flirting with the idea of lining it but decided not to due to (a) inadequate fabric choices and (b) a preference for simplicity. 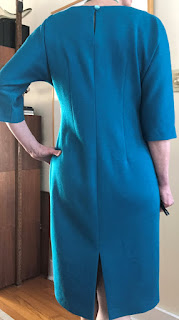 I could have taken more width out of this but am afraid of over-fitting in a knit.

Instead of a hook and eye at the back neck (as per the instructions), I made a thread loop for a button. It's totally unnecessary. This dress can be pulled on quite easily.

I must now turn to sewing a replacement swimsuit as my last one is literally falling apart. (I made it in November, 2016 and I swim twice a week, so it's surprising that I can still wear it at all!) After that, it'll be back to my knitting machines...
Posted by KayY at 4:42 PM 8 comments: 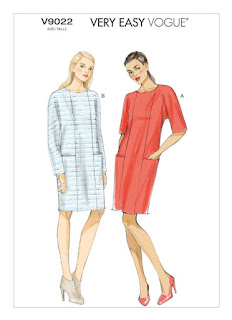 The cover art of Vogue 9022 is seriously ugly. I would never have bought this pattern but for the many very positive reviews on Pattern Review which praise it for being super easy to sew and very comfortable to wear.

I am making it from a wool double knit (maybe a blend) that has quite a bit of stretch but no lycra. The idea of making this dress from a woven has zero appeal to me. But initially I chose my size from the available choices (XS-S-M-L) conservatively based on my measurements. S is supposedly 8-10. I figured I could take it in and cut it down once I could see how it was going to fit. 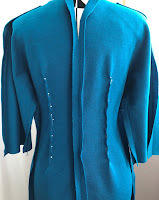 As I predicted, the fit was very sloppy. See for yourself. It's too wide from top to bottom. The armscye is very low. Also, as I moved around I realized that the dress was rotating back, suggesting to me that the back was too short relative to the front. And the back is just generally baggy.

So ... alterations. First, I sewed it back at the side seams to size XS above the waist and a smidge wider at the hip. At the shoulder seams I sewed it to XS. I took two vertical darts in the back and sewed out a third vertical dart in the CB seam.

Then, I took some depth out of the front only by opening up the shoulder area and shortening the front along the lines pinned out in the photo.

I shaved out some of the princess seams in front to create more waist darts, in effect.

Next and hopefully last, I will have to cut the front neck lower to match the amount of depth I took out of the shoulder seams.

So, not such a simple sew. But I think I will like this dress once it is done. 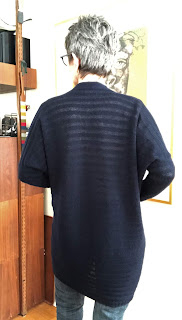 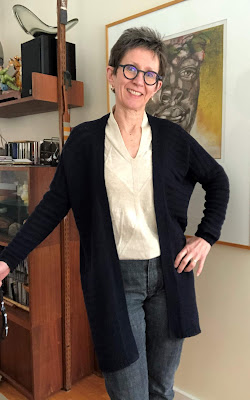 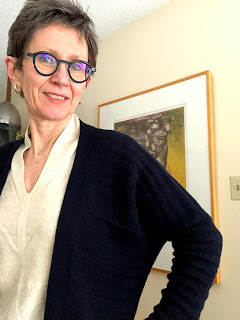 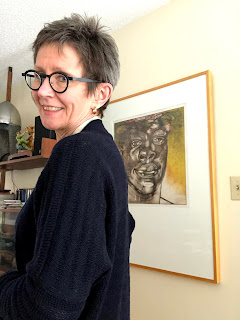 I'm very pleased with the finished product!
Posted by KayY at 2:50 PM 4 comments: