What else have I made? Bras!

If I was blogging more regularly it would provide me with an accurate account of what I've made in the past months. Oops, now I have to wrack my brains to try and remember.
I went on a bit of a bra-making tear in about February, which is the time of year that tends to happen, if past years are any guide. I made two sports bras and three for everyday wear.
The first sports bra was the Jalie Coco, which I made with a few amusing sort-of-coordinating stretch fabrics that I bought at Ann's Fabric in Hamilton when I was there last year. 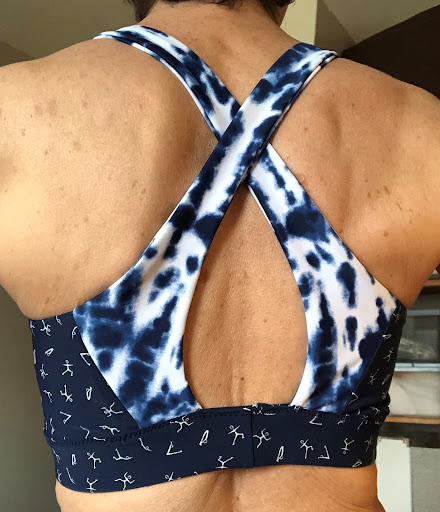 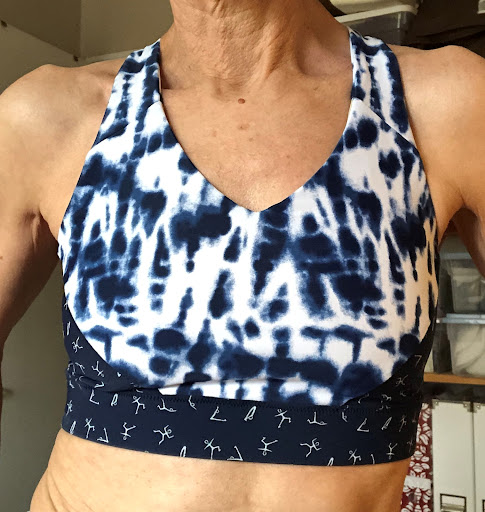 I have a beef with over-the-head sports bras which is that they are hard to deal with when you've been sweating (which you probably will do while wearing a sports bra, right?). One of the things I thought I would be able to do with this pattern is to insert hooks at the CB of the band. The pattern isn't written that way, and so far I haven't had the energy to figure out how to modify it. But that would make it a lot easier to get on and off, I think.
Something I realized after wearing this a few times (which I should have realized a lot earlier, since I tend to be short through the armscye area) is that I should have shortened the straps. They look OK but I feel like the bra is sitting too far down on my body.
The Coco bra has minimal if any shaping and relies on compression to hold everything together. It is fully lined. I used some power mesh from stash in the front and side, and the straps are self-lined. With this type of lining and the firm lower band, the bra is very supportive. The front lining is designed with the option of inserting bra cups between two lining layers, and as a result the front lining is a little complicated. I did not even consider making this option and dumbed the pattern down by combining the CF lining piece with the "cup" lining piece. In this way I got rid of two seams that had no shaping built into them and seemed to have the potential for show-through bumpiness. 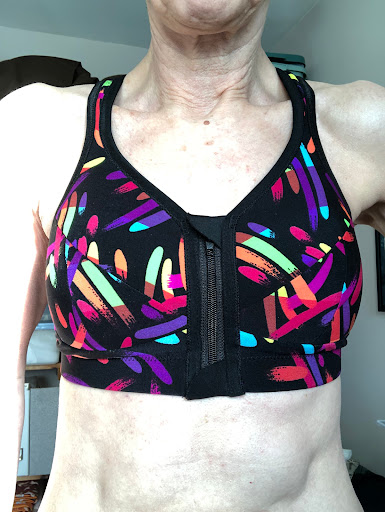 By contrast, the next sports bra that I made has fully shaped cups with plenty of seams. This is the Greenstyle Endurance sports bra. It has a front zipper for easy on-and-offing, no matter how sweaty you are. I went ahead and shortened the straps by about 2.5 cm based on my Coco experience, even though I had never made anything like it before. I love the fit and feel of this bra and the shortened straps are perfect for me.
The Endurance is sewn with a seamed bra foam inner layer in front, a lined back and all edges are encased in wide fold-over elastic. Surprise! I had bra foam and wide FOE in stash, along with a remnant of colourful nylon lycra and a shortish coil separating zipper. I even had a little scrap of scuba knit for the top and bottom zipper shield. 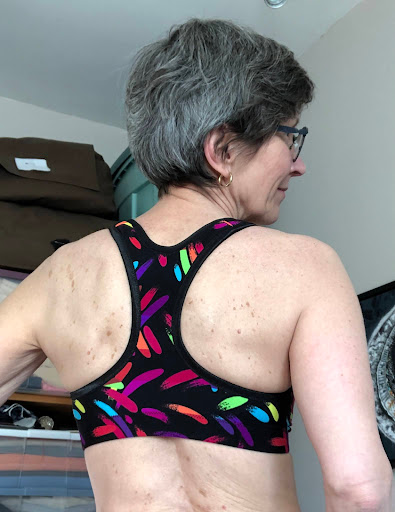 I found the bra foam super easy to sew. The edges are butted together and sewn with a 3 step zig-zag - no bulky seam allowances. It's very comfortable against the skin too.
I skipped the step of stitching down all the seam allowances in the outer fabric, which wasn't the smartest thing since quite predictably, once I washed the bra the seam allowances all did that little rolling thing that jersey knits always do. Luckily this is not noticeable in my busy print, and I can't feel it. Next time.
The bra has a nice racer back and the FOE finishing makes it look very snappy. It is easy to get on and off, although I sometimes find it hard to get the zipper connected at the lower edge when putting it on (negative ease). Maybe a molded plastic zipper would be easier. 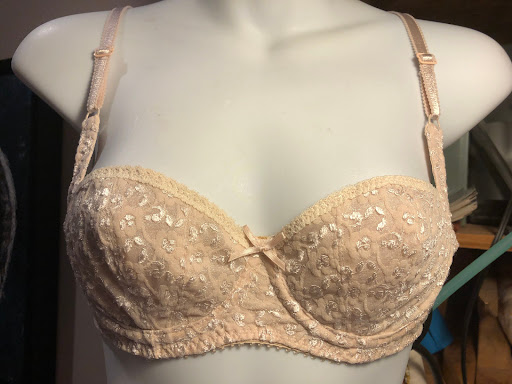 If you are still with me, the other new bra pattern I tried out is the Atelier AFI Exquisite bra. This is a very lovely "balconette" bra with seamed cups. The cups are supposed to be made from non-stretch fabric and decorated with lace.
I used a stretch fabric but lined it to reduce the stretch factor. And I made a slightly smaller size than recommended. I adjusted the bridge to be narrower than the pattern based on my earlier bra experiments. It turned out perfectly. I'm actually amazed at the fit, especially given that I had previously tried the free Maya pattern and didn't care for it.
You'll just have to believe me when I say it fits me better than my plastic display form.
I also made 2 versions of my self-drafted bra pattern, including one that is a complete clone of this one and I finally made up the full band version of the same pattern. I had previously made the pattern using the information in Beverly Johnson's Bra Maker's Manual (vol. 1). It worked out fine, although my elastic application left a bit to be desired.
Posted by KayY at 8:56 PM 1 comment: 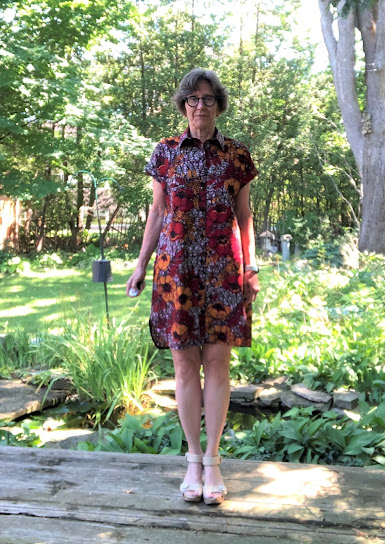 I've had more wear from this dress which is a fantastic summer outfit that requires no fussing. Shaping? What shaping? Very cool on a hot day.

It's the Kalle Dress from Closet Core Patterns.

I am still sewing entirely from stash. The fabric is a batik print I got at the Fabric Flea Market a few years back. I wonder if there will be any FFMs in the post-pandemic future? That was a lot of people in a room.

It was a bit of a struggle to get all the pieces out of my fabric as the piece was only 2 metres and I was making view C (full length button band) which calls for 2.5 metres. If I had had more fabric I would also have lengthened the back.

I had to cut out the bias for the hem finish from some black shirting that was on hand. The buttons are vintage black glass, another past FFM find. I had two fewer than the pattern called for but you know what? I was never going to do up the one on the collar band, and a little judicious re-spacing of the rest was never going to be noticed. Problem solved. 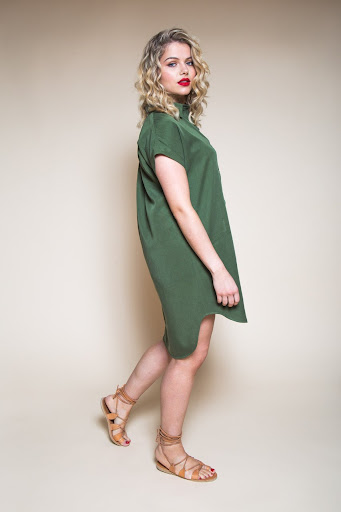 I made the front longer and adjusted the curve of the shirttail hems to be a squarer sort of curve for more coverage, as they looked a little skimpy and I had noted comments to the same effect in reviews of this pattern. The side view copied from the CC website shows what needed to be fixed. 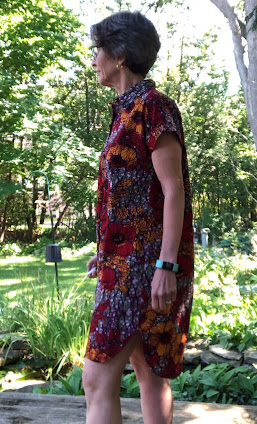 All dressed up and (still) nowhere to go

I posted a photo of the thrifted rayon print I used for this dress in 2015, so it has been marinating for a while in my stash. I had a lot of it - enough to cut out the massive lower skirt piece in this dress pattern on the fold and leave leftovers. It's the Carole Dress from Fibre Mood. 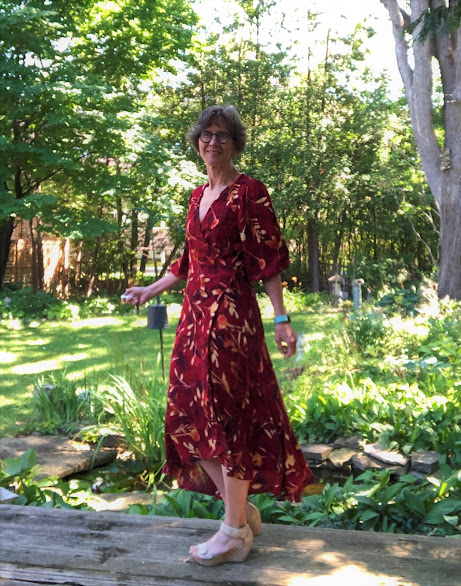 Why did I buy this pattern from a formerly unknown-to-me online outfit from Belgium?
Because I looked at Carolyn's blog in early 2020 and she was waxing poetic about Fibre Mood patterns, and this dress in particular which she had made a couple of times.
I was also inspired by her blog to buy their patterns for the paper bag pants and the Faye dress. Have I printed them yet? erm no.
Carolyn blogged about this pattern twice. In her second post she sort of suggested that she had had to make some adjustments to the pattern for fit, but didn't describe them. As for me, I found I had to make some to get this dress to something I would be willing to wear.
There were two major things wrong with this pattern, IMHO. 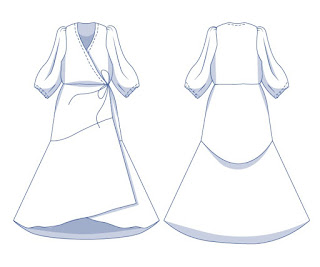 First, as you can see in the line drawing, there were no darts or other shaping incorporated into the waist area and this left an enormous amount of excess fabric in the middle of my back.
While I'm not averse to a dress that blouses attractively above a waist belt, this dress did not seem to me to call for it. The waist tie is extremely narrow (about 1cm) and I thought one of the nice features of the dress, as Carolyn had made it, was the semi-fitted back silhouette. By contrast, the line drawing shows a blobby unattractiveness at the waist. I was dubious about this as I progressed through the sewing steps, following the instructions faithfully. I figured I could whang some fisheye darts in there once I could see how bad it was going to be. 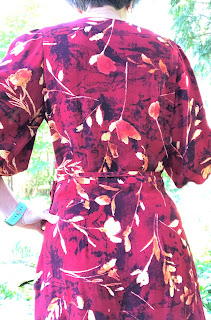 It was bad enough that the back darts are a good 3cm each at their widest point. I eyeballed what was necessary by pinning out as much fabric as was needed with the dress on my trusty dressform.
Can you see the darts? I didn't think so. 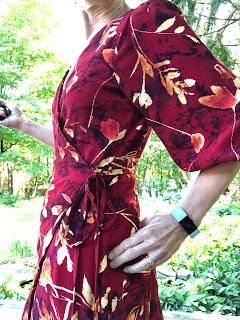 Second, once I got it attached, I realized that the skirt was waaaaaay too long in back for an ordinary human. I did not adjust the front for length but the back is at least 15cm shorter as a result of my adjustments and is still plenty long enough.
The fix was to rip out the seam between the skirt yoke and lower skirt and take out a massive curved wedge, tapering to nothing somewhere in the front. I do not actually trust the accuracy of the line drawing but maybe the skirt seam was as curved down as it shows. It's much more horizontal in my finished dress, not that you can see it.
Luckily the instructions had induced me to sew the seam that attaches the lower skirt to the upper skirt last so I didn't have to mess with changing the side seams.
The enormity of figuring out how exactly I was going to increase the depth of the concave curve in the lower skirt while also decreasing the depth of the convex curve in the skirt yoke and the impossibility of imagining where or for what I would wear the dress during the early part of the pandemic meant that the partially completed dress sat on my form literally for most of a year. In the end, it wasn't that hard because rayon is incredibly shifty and therefore forgiving. And nobody can see that seam!
I have worn this dress once (working from home, for a lark) but am hopeful I can actually wear it out in actual company when I attend a family event that is hopefully going to take place in early September.
Posted by KayY at 1:55 PM 4 comments: