My first Ralph Rucci - maybe not my last 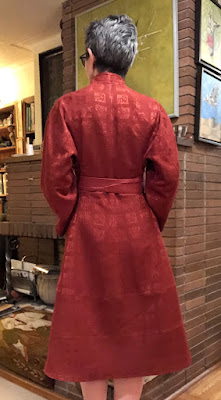 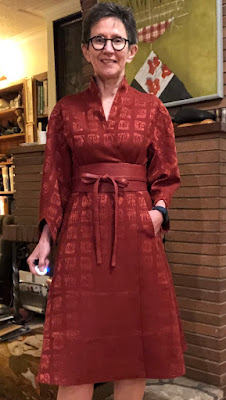 The dust has settled on my complicated project, Vogue 1239. To recap, I needed a dress, I had the pattern, the fabric, the lining and everything else I needed except the thread in stash. Except I didn't have enough fabric to cut out the belt. And, I later discovered, I hadn't actually read the pattern instructions very carefully. But it worked out in the end.

This is a very complicated pattern in my opinion, although Vogue apparently doesn't share my view, having designed it as being only of "Average" difficulty. I think a pattern for a fully lined dress that includes asymmetrical left and right pieces, multiple pieces that look absolutely nothing like anything I had seen before (despite 40+ years of sewing), darts that turn a corner, multiple gusset inset points and miles of edge- and top-stitching is more difficult than Average.

Take a look at the photo showing the upper pieces of the dress laid out, single layer, on my fabric. Anything look familiar? I didn't think so.

Oh yes, and the instructions had 67 steps, which is a lot. I confess I didn't read them all the way through before proceeding.

I did read the pattern enough to realize that it called for absolutely no interfacing. Given the stand collar and the long somewhat bias edges of the centre front, that didn't strike me as a good idea. I interfaced the facing pieces. This stabilized the edges so they wouldn't stretch out of shape. 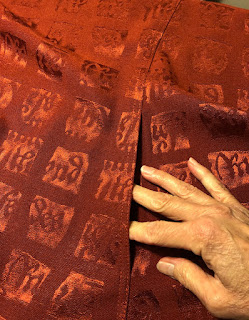 I also read enough to realize that the method for sewing the pockets would definitely not be easy, if it could be done at all. These are in-seam pockets with a top-stitched opening. No Vogue, you cannot sew the pocket bag first and edge- and top-stitch the opening afterwards.

I did it in the opposite order.

I told you in my last post that 2.5 metres was the perfect amount of fabric for this dress, but not enough to get the belt (an extremely long bias piece). If I had read further into the instructions I would have realized it also wasn't enough to cut out the lowest tier of the skirt in the fashion fabric. I had cut all inner layer pieces out of lining and used up almost all of my fabric (a necessity) before I realized this error. I had also completely sewn the dress and mostly sewn the lining.

I thought about why Ralph Rucci would want the lower tier in fashion fabric. Maybe just because it might show, but more likely to match the amount of heft of the other edges of the dress, which are faced. And also because the hem of this dress isn't meant to be limp. So I improvised. Really, what else could I do?

I retrofitted the layer by applying some very light fusible interfacing to the lowest layer. Then I applied a sort of facing for the hem (about 6cm wide) just to get the right heft for the very bottom of the dress which is edge- and top-stitched like all the other edges. I had *just* enough fabric scraps to cut this facing but not enough to get it all on the right grain.

Then once I had invisibly attached the hem facing to the interfacing, I was able to turn the lining under at the hem and hand-fell it to the facing. This worked extremely well, in fact better than it would have if I had had enough fashion fabric for that lower tier of the skirt.

The pattern instructs you to make the entire outer dress and then the entire inner dress with faced edges, and bag the two together. You turn it right side out through a little hole in one of the lining seams. I don't know about you, but my sewing isn't precise enough to make it very likely that there would be no need for any adjustment to get the outer dress and lining to hang absolutely perfectly. My method left plenty of room for fudging so my hem doesn't pull and the lining doesn't show anywhere.

I'm very happy with the finished dress. I wore it to Frocktails and got a comment or two. It was warm and comfortable. I had attached a hook and eye at the outer waist as well as the inner waist tie that the pattern calls for and it felt very secure.

So now I have to say a couple of words about the belt. 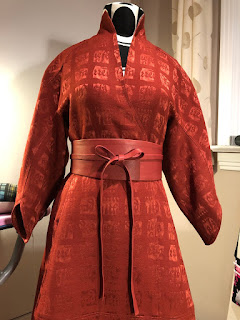 No fabric? No problem! I had the perfect leather in stash. However it was far too soft and supple for the obi-style belt this dress needs. Luckily, the stash came through with a stiffer skin and I used two layers of that leather to interface and then line the belt.

I was a bit nervous about making the belt but it really isn't that hard to work with leather and if you have enough rubber cement you can basically do anything. The only sewing in this belt is where I attached the ties to the ends of the long main piece.


Now I have to make more clothes that need a rusty red-orange obi-style belt...
Posted by KayY at 4:33 PM 18 comments: 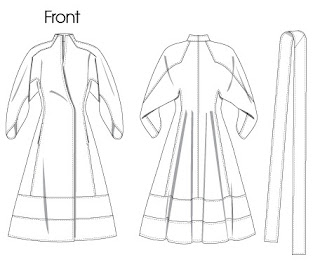 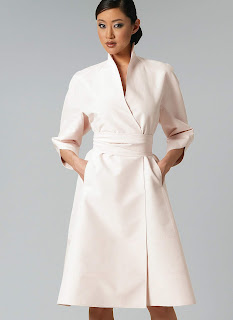 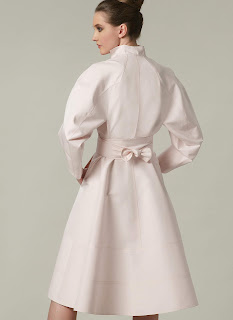 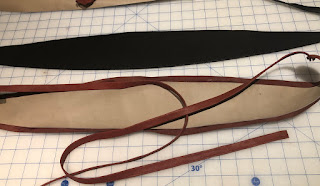 I absolutely must finish this dress this weekend, so will reveal the entire thing in a later post. À plus tard...
Posted by KayY at 11:55 AM 9 comments: