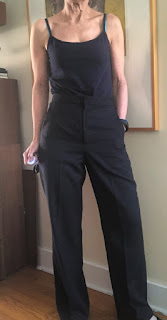 The last item I'll post today is the trousers that I started at the tail end of 2019 before we had heard of COVID-19. 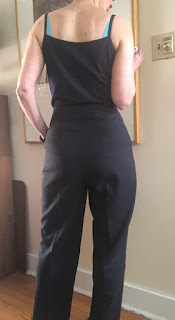 To recap, I wanted navy wool pants that had the very comfy waist/hips of the Style Arc Kew pants pattern but a more standard leg. I struggled to combine the Kew pattern with a Burdastyle pants pattern from 2005. Then I invented a way to line them while still allowing for fitting while I sewed. The end result is not perfect but they are, as I had hoped, very comfortable and I am pretty sure I will get a lot of wear out of them. 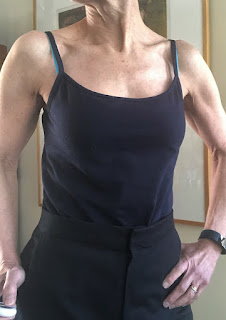 I really needed a little camisole to wear under my new silk shirt. The Iconic Patterns Sammy Cami, only $2.00 AUD, fit the bill. 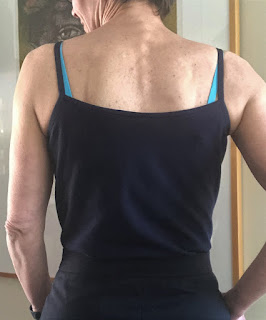 Making this was a huge relief after struggling with shifty silk chiffon, I can tell you! I used navy cotton/lycra jersey (I have a lifetime supply of this...).

The second and subsequent versions of this little cami will be quicker since with this one, I figured out the sizing (blending from 10 to 12 at hips) and the length of the straps. I found that I wanted my straps much shorter than they would have been if I had followed the instructions. Also, I used some fold over elastic from stash for the straps and binding under the arms rather than the cut strips of self-fabric.

This is a really useful pattern that I will make again (when the fabric stores are open again for fold over elastic purchases, that is).

Everything is discombobulated! And a silk shirt

The very interesting aspect of our current predicament caused by the global pandemic is that it's global. Around the world, so many people are experiencing the same type of disruption to their daily lives as I am. I am lucky - unlike so many, my employment and income have not suddenly stopped. In fact, as a government lawyer, my workload has multiplied and transformed. Whereas before I had time to think before I gave advice, now I mostly do not! The issues are so numerous and the time deadlines so very, very, extremely short. I sincerely hope that this is not a new normal for me and that in time (hopefully not too many weeks, or months at most), my life will return to its formerly placid pace. 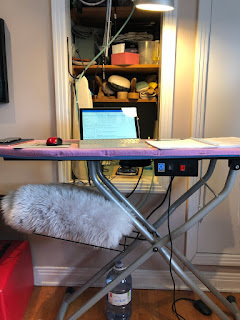 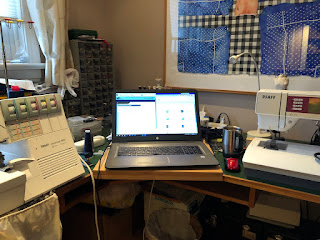 So what has been going on in The Sewing Lawyer's sewing room? Well, for starters, it has become a dual function work space. I have a very heavy duty ironing board which raises high enough to be a comfortable height for a standing desk, I have discovered. When I feel like sitting, my computer nestles on a table surface between my serger and sewing machine. I can in theory close the computer and be back to sewing readiness in no time. The only problem is that I have no time these days, it would seem, for anything but work!

The fact that production has slowed does not mean it totally stopped. I actually finished working on something this week that I had started several weeks ago. As seems appropriate, it's complex and it was a demanding project and the outcome is slightly unsatisfactory. 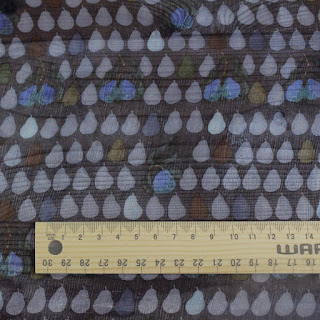 Introducing a tunic top made in the most difficult-to-work-with fabric I have ever tried, crinkle silk chiffon. I bought this piece in Sydney Australia at The Fabric Store. As of writing this, there is still a bit of it available. It is a Liberty of London fabric and the print is wonderful - rows of pears on a dark blue background. I love how it looks and I really disliked sewing it! 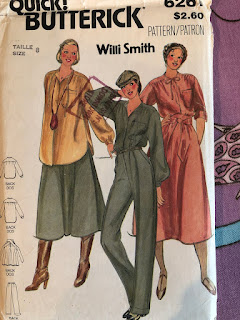 I used a vintage Butterick Willi Smith pattern from my past. I made it once before, in quilting cotton. I wish I could find a photo so you could compare, but no luck. 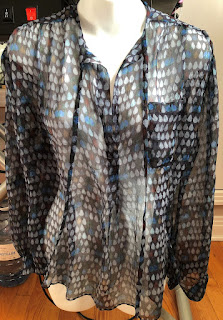 So without more, here is my completed top, on a plastic mannequin. One of the problems with this top, at least at this time of year, is static. If you look at it sideways the fabric sticks to whatever it is next to, including the wearer's skin. After a few days on an inanimate object, the static has subsided.

The fabric is truly transparent, which caused lots of sewing issues (this in addition to its extreme shiftiness which made cutting on grain almost impossible, and the static that I already mentioned). I did a lot of the sewing by hand because that was the best way to control the fabric. After about 50 years of sewing, this project led me to try several techniques for the very first time. 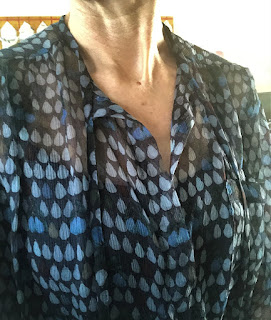 The pattern has a front placket and unfortunately I had lost page 3-4 of the 6 pages of instructions, which would have unlocked the secrets of how to construct this particular one. I did my best to figure it out from the markings on the pattern, and even did a mockup in trash fabric, but ended up winging it to finish the lower edge of the opening on the inside. Why yes, there is a square of fabric hand-tacked on the inside over a raw edge that I couldn't otherwise get rid of. Luckily, the fabric is so gossamer fine that this lumpy solution is completely invisible!

I used paper to ensure that I was folding and stitching as accurately as possible. A first! 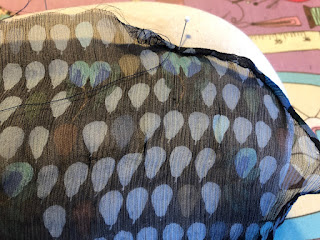 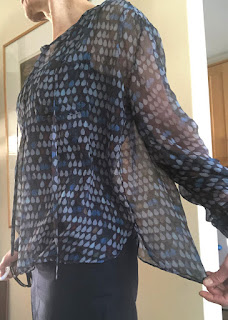 This top has a rounded shirttail hem. The only way I could imagine finishing it satisfactorily was by hand. Susan Khalje to the rescue with an excellent video on doing a hand-rolled hem. I finished the hems before sewing the side seams, which worked well. Hand-rolled hems, another first!

As for those seams, only French seams would do, n'est-ce pas? Again, Threads to the rescue. Kenneth King teaches an excellent way to sew really strong and really tiny French seams using the rolled hem setting on your serger for the first pass. I had made French seams before, but never using this technique.

I used navy silk organza as the inner layer of the yoke, and as interfacing in the cuffs. I cut a strip of organza selvedge to stabilize the ties at the neck.

All in all, this is a beautiful shirt, but it remains to be seen how much wear it will get.

Just for the record 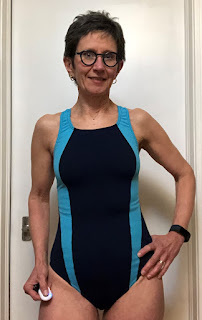 Utilitarian sewing is also good, once in a while.

I made a new Jalie racer back swimsuit to replace my last one, which was new in November, 2016. Wow, it lasted a really long time (swimming lengths twice a week almost every week). It was, however, really past its best before date given that the lining  and much of the topstitching had rotted out. This proves to me that not all synthetics are equally indestructible. The lining was nylon and so was the woolly nylon that I had inadvisably used for the looper thread in my coverstitch machine.

For the fabric of my new suit I got my hands on some more 100% poly fabric, but it's only available to me in solid colours. So colour blocking was the way to build interest in this suit.

The lining might not be nylon, and I ditched the woolly nylon for poly thread so this ought to last quite a few years.
Posted by KayY at 4:07 PM 5 comments: