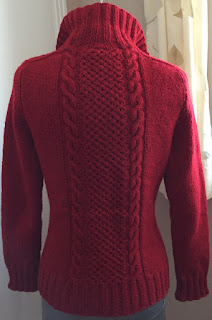 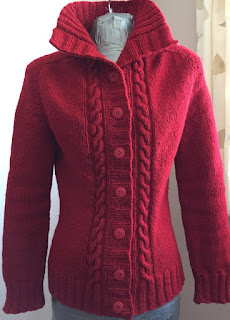 I showed you a bit of this sweater before. It's a pattern called (fittingly I think) "Persistence is Key". Available for download on Ravelry.

It took me a month and two days to knit this, which isn't too bad given that the back requires cabling on Every. Single. Row.

It would have taken a lot longer, but I was able to knit the sleeves on my mid-gauge knitting machine. So they took an hour. For both. This is one of the reasons to love knitting machines. Speed!

The sweater is a top-down "contiguous" design. I made a contiguous cardigan before, and I love it, but... This one has the same issues - mainly sloppy lack of structure, requiring post-market fixes (lines of chain stitch to firm up the fake "seams" at the armscye, and in this case to also shorten the CF above the bust, a fix I also have to apply frequently to sewing patterns).

There is a long saga detailing my views of the actual pattern on my Ravelry project page (this link should work even if you are not a member of the site). Short form: I did not care for the way it was written, which is surprisingly lacking in the kinds of detail that I think are important, given that it's 7 pages of mostly dense text. My criticism may be unfair given the gazillions of ways there are to write a knitting pattern, but I would always like more schematic details, more charts, and more hard info (like stitch counts after every section in which I have to increase or decrease). And I can totally do without stuff like this, which this pattern had in copious amounts:

Believe it or not, those are the actual instructions for the first row of the ribbing at the hem in my size. There are different and equally incomprehensible instructions for each of the other sizes. The intended result is dead plain 2x2 ribbing that flows nicely from the existing cables. 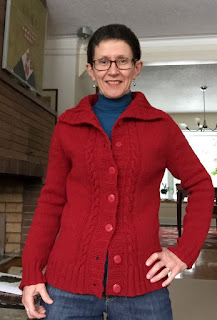 I only gave the pattern 3 stars but I love the yarn, which is Briggs & Little "Regal", a staunchly Canadian worsted weight 100% wool yarn. It's positively crunchy, this yarn. There are bits of straw in it, though not as much as I found when machine knitting the lighter weight "Sport" from the same company. It gets a bit softer when washed and it has great stitch definition for the cables of this pattern. It is also very lofty and dried in no time when I washed and blocked the finished sweater. Best of all is that the yarn comes in huge skeins (249m in 113g) and is extremely reasonably priced at $6.99 (CDN). I won 6 skeins of it in a draw at my local store (Wool Tyme, great place) and I have about 1.5 left.

Anyway, I hope the travails of making this will shortly be eclipsed by the happiness of wearing it, which I am doing as I type this. It's chilly in the house and this cardigan is lovely and warm. 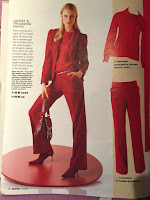 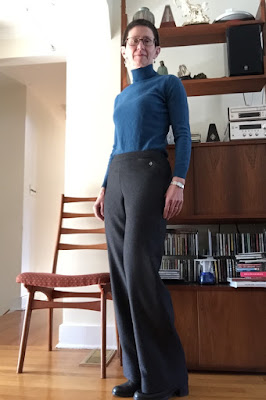 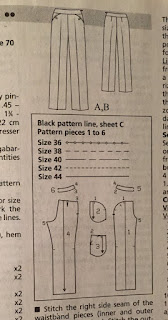 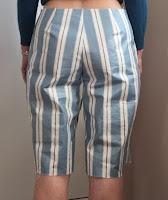 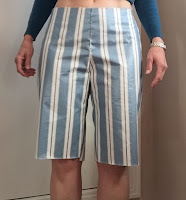 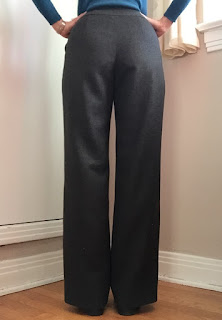 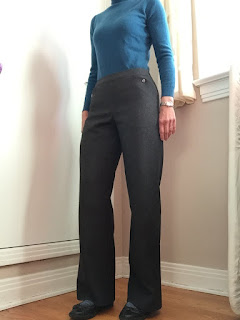 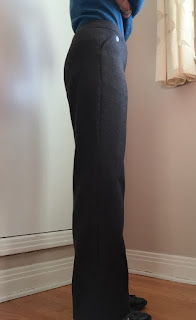 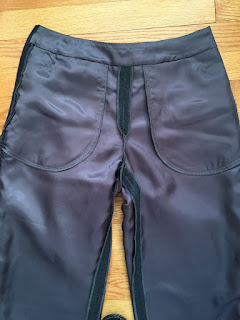 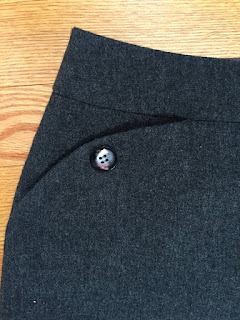 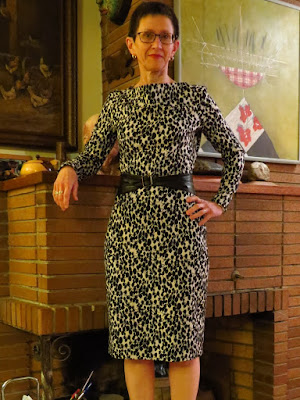 With my new-found machine knitting expertise (haha) I'm going to say the fabric is a double bed jacquard knit - similar to a ponte knit in weight.Not that any technical information is necessary to appreciate its bold all-over black and white craziness.  The content is a little mysterious, but based on how it responds to the iron I'm confident that it is not a natural fibre, and based on how it stretches, that it contains no lycra. 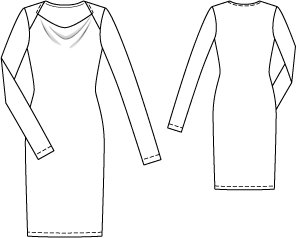 The pattern is from the October, 2014 Burdastyle Magazine. The details are pretty well disguised.

This somewhat beefy knit is not exactly right for the pattern. The cowl, not a terribly generous one, sticks out a bit instead of draping. 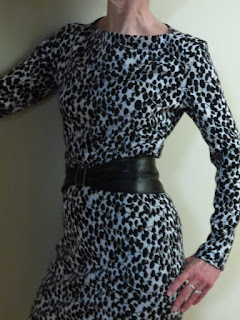 The fabric also doesn't have the stretch intended by Burda for this pattern. So I cut a size 38 above the waist and 40 below, with some fit insurance (1" or 2.5cm seam allowances at the side seams). Once I had completed the neck/shoulder seams I basted it together. My quick and dirty fitting showed that I could take it in above the waist, but that I needed some of that insurance in the hips. The completed dress is figure skimming rather than stretched to cover, which I like.

As you can see at left, it needs the belt to cover for the fact that the back waist is baggy and the torso is slightly too long. And to relieve the expanse of crazy black and whiteness. Without it, the dress wears me.

This is a super easy pattern and it went together really quickly.

On to the next project! I do hope it'll be a pair of grey wool pants.

The swimsuit got its chance to début in the pool. Our coach set up some sprint sets in its honour. Too bad it didn't make me any faster.

In a continuing theme, I made another exercise top, again using the Anne-Marie pattern from Jalie. If you recall, I made this pattern before. That top is in regular rotation but the rest of my workout clothes are getting a little tired. Or maybe I'm just getting a little tired of them. Time to mix it up! 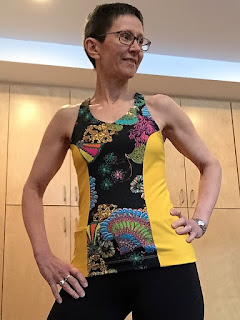 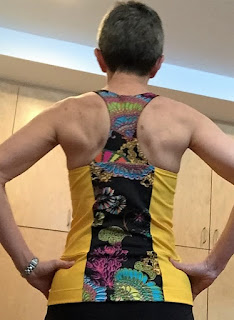 There isn't much to say about this top except: 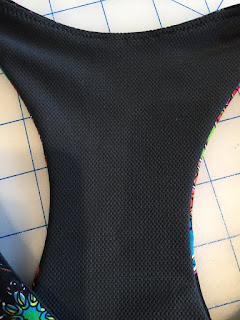 In non-sewing news, my hand knitting project continues apace. I've set myself the task of completing at least 8 rows per day. That amounts to one of the big cable repeats, about 3.5cm.

My cardigan is now at high hip length (a couple of cables past these photos). The pattern is well named ("Persistence is the key") because the centre back panel requires cabling on every single row. I knit the plain sleeves on my mid-gauge knitting machine. What a relief! 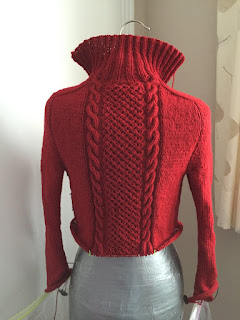 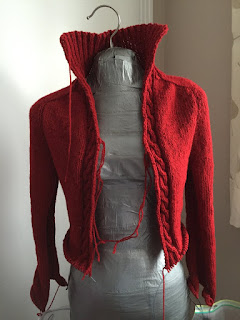 And I finished a dress. But I'll save photos of that for my next post!


One of the Sewing Lawyer's extra-curricular activities is swimming - twice a week, month in, month out. I swim in a master's swim club. It is hard work and it is early in the morning. The trick is not to think about how much you would prefer to stay in your nice warm bed. Set the alarm, get up, and go.

Anyhow, swimming pools are hard on swimsuits. For years I bought suits and had to replace them annually or more frequently if by mistake I bought one that had any lycra-laden fabric in it. Swimming pools are especially hard on lycra.

Then I was lucky enough to buy some 100% poly swimsuit fabric at the Fabric Flea Market one year (2010 according to this post). And I snagged a bit more similar stuff the following year. In 2012 Jalie 3134 came into my pattern stash. And I made a suit.

Last month it served notice that it is reaching the end of its life. That is more than 3 years worth of swimming twice a week! The Speedo fabric is still going strong, but the lining (100% nylon) ripped so badly I ended up cutting it out of the CF piece. I'm still wearing the suit, but ... it was time for a replacement.

I present to you my pink palm paradise swimsuit! 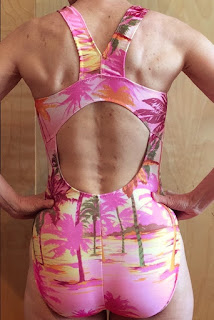 It's pretty perfect (with PALM TREES!). My lane-mates will be all befuddled when I show up in a not-blue swimsuit.

(Though I found I had a bitty scrap of the Speedo fabric left too - so I cut out another blue one too.)

This fabric is slightly stretchier both in the length and the width than the Speedo blue so I cut it per the pattern whereas the blue one was lengthened (per my 2012 post).

I had mostly run out of 1cm (3/8") elastic, which the pattern calls for, but had plenty of 7.5mm (1/4") elastic in stash so I used that instead. To be honest it doesn't seem that much different.

I used my coverstitch machine with wooly nylon in the looper (tension 3, 3, 0, stitch size 3.5). I had to use the narrow setting due to the narrow elastic. It's not perfect but at 6am there are very few sharp eyes watching out for wobbly stitching.

I had everything in stash except lining. I had to go to a fabric store to buy fabric! But I came away with only 100% nylon swimsuit lining, cut it out the same day and now I have extra in stash for the next time. My stash-busting virtue is intact.

You may hear a bit more from me in the next few weeks as I'm on my annual 5 week leave from work, in which I sew, knit, curl, swim, ski and otherwise loaf. I'll leave a bit of time for blogging.
Posted by KayY at 8:32 PM 6 comments: