It was a Jalie weekend

Get it? (never mind)

I am becoming one of those sewers who cut things out and don't sew them right away.

I had more of that blue 10% polyester Speedo (R) fabric, just enough for one more suit. So while I was cutting out my pink Hawaiian sunset/sunrise suit (last February) I also squeezed the pieces for one more blue one out of my precious remaining inches. And then it sat. And sat. And sat.

So long that I almost had a heart attack half way through, thinking I had either forgotten to cut out the strap pieces or I had lost them, and I didn't have enough left and I would never again have a blue Jalie/Speedo suit that lasts for years instead of months. And then I found them, in the plastic bin with the tiny snippets that are all that's left of this wonder fabric.

So I finished the suit. My coverstitch machine and I got along famously.

This is the most flattering shot of it. I predict it will function as a "serious" swimsuit (twice per week, 1.25 hours per swim, year round) for three years, like its predecessor (the blue fabric wears like iron but the lining died). My pink one was amusing but ultimately it is a disappointment although I am still wearing it. 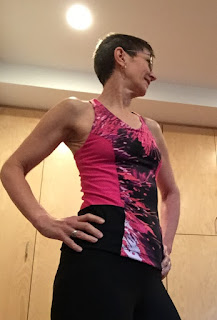 I had also cut out another Anne-Marie exercise top and matching full length tights weeks ago, and made them last weekend.

I briefly considered using the pink print as the main front (exploding floral crotch, anyone?) but reconsidered. Not only because I really didn't think I needed an exploding floral crotch, but because the fabric is lighter weight and not as stretchy as it should be for the main portion of tights. So I used (again) the black supplex fabric I bought back in 2010 from Susie Spandex in Montreal. I do not know what I will do when I run out of that either...