I'm heading off for a two week holiday in a couple of days, so of course I had some last-minute sewing projects. (You do this too, right?)

I'll be in a place that's somewhat warmer than here, but not hot. So I was thinking layering. Knit tops are always great in that situation, and I had the Bobbi pattern from Jalie and some fabric in stash. Ready, set, GO! In what seemed like a few minutes I had a top. And then the next day I had another one. And they are both already layered!

I started with this crazy poly print. It is very soft and would probably be too hot in real heat, but in this mid-season I think it will be just the thing.

And then I threw caution to the winds and my second Bobbi is made from a somewhat less stretchy knit that has these little plastic ... blobs ... uh I mean dots all over it.

I wasn't sure how my serger and sewing machine needles would like these but they chunked through them. On the other hand it was really hard to sew over them in an actual straight line. A moderate amount of re-sewing occurred.

So this top is extremely simple. There are 4 pieces, two inner and two outer. The inner is an ingenious "facing" that is really more like a cropped snugger fitting top that connects to the drapey outer top at the neckline. 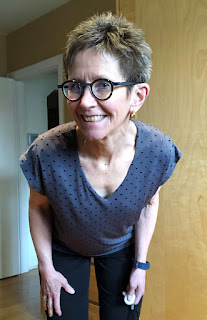 The inner top does two critical jobs. First, it prevents the loose top from gapping away from the body at the neck. There will be no unintentional cleavage displays while wearing Bobbi, even when bowing very low! 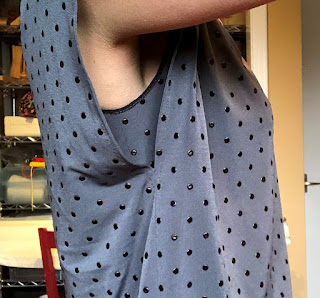 The second job is similar but operates differently. With a more conventional armscye, the inner facing covers the bra and stuff so there will be no unintentional side-flashes while wearing Bobbi either.

So for a simple little top, this pattern is unusually sophisticated. 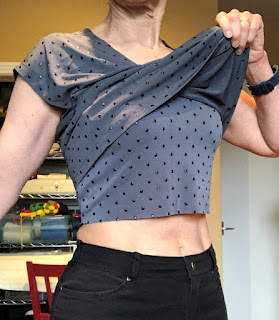 I made this up pretty much as instructed except for one thing. I did not turn the armscye of the under-layer under and topstitch, I used fold-over elastic instead.

For my crazy print top, I had some standard white FOE.  On the dotty top I used some strange stretchy woven tape from Mokuba. It is only 9mm wide and it took some effort to keep it folded nicely around the curves of the arm opening. 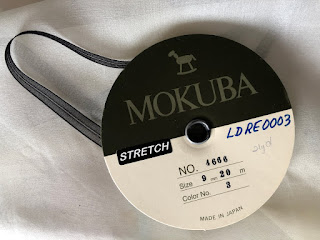 Maybe I'll get to visit Mokuba's head office - we are headed to Japan! 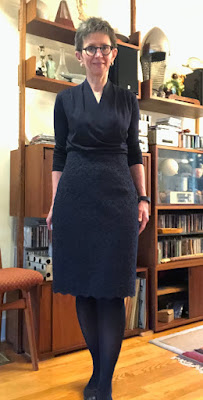 This took an awful lot of hand sewing!

First there was the basting of the lace to the underlined and hemmed skirt pieces (as seen in the last post).

Then I sewed the darts and completed the side seams (by machine).

Then I took a deep breath and cut into the lace to separate the motifs so I could overlap them over the curves at the top of the skirt. I was worried that because the lace has such a regular pattern, the places it overlapped would be really obvious. This turned out not to be a problem at all.

Then I hand felled the edges of the cut lace, tacking it through all layers.


Then I sewed the CB seam and hand-inserted the zipper (it would have been pretty hard to do it by machine). Then I cut the lace motifs to overlap the zip opening and also to mold around the vent at the CB hem.

I did some more hand tacking of the lace around the zipper.

I added tiny snaps so the bits of lace that overlap at CB would appear attached to the base fabric when the skirt was worn.


Let's see... Then I sewed the lining and basted it to the skirt, wrong sides together, at the waist edge.

I had some dark navy grosgrain in stash. It was originally meant for hat bands. It is the perfect width and colour for a ribbon facing of my skirt. I attached it by machine and checked the fit. The waist was a bit loose but I was able to ease it into the grosgrain.

The lining is attached at the zipper, down the CB seam, and at the sides of the vent. 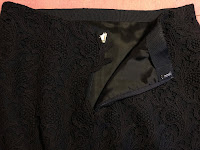 I added a large hook and eye which are attached to the grosgrain at the CB waist.

The pattern is the one illustrated at right from the February, 2009 edition of Burdastyle.

Here are a couple more shots of the completed skirt. It's pretty comfortable! 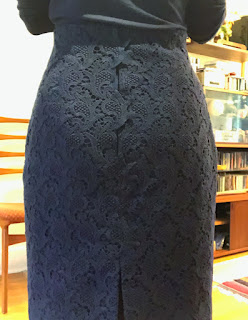 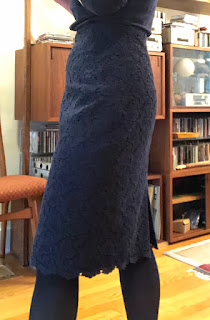 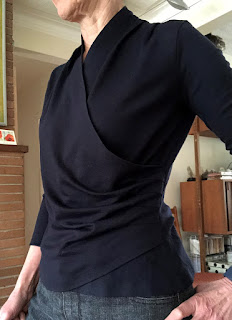 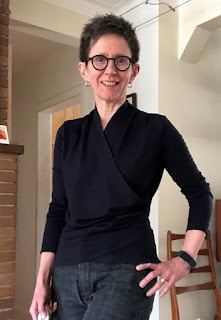