From before and for later

I could have called yesterday's post "During". Here are the bookends.

In January (before broken wrist) I made another version of McCalls 7351 for my son's girlfriend. She had tried on my dress and loved it and I was so happy to make one for her. I had a few cotton print lengths in stash and offered them up. She chose a light and crisp cotton print.

So far so good but after I started thinking about how the fabric would translate into the dress, I had doubts. The original dress was made from beefy quilting cotton and the chosen cotton is definitely in blouse-weight category (think cotton lawn). If I had been making this for myself, I probably would have gone with a fuller skirt or switched to McCalls 6996. However I had a commission and I had to "make it work" as some TV sewing personality or other has apparently said.

Mulling it over I found a solution - when you need your fashion fabric to have a different hand, underline it for heaven's sake! I had lots and lots of this fabric. The upper portion of this dress is structured, as is the front band. My only concern was the skirt. So I cut it out twice.

I used the doubled skirt as an opportunity to do a completely clean finish at the waist seam. Order of construction was as follows:


Mission accomplished. The dress awaits warmer weather and I hope it will be a comfy but stylish summer dress for the recipient. 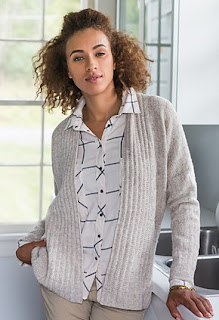 At Christmas, I started another hand knitting project but its completion will now have to wait until after the cast is off. So far at least, hand knitting is completely unworkable with an immobilized wrist.

The pattern was designed for a yarn that seems to have qualities similar to Shetland yarn (not smooth or soft, woollen spun, lots of loft). I had a sweater quantity of yarn that I thought would work (vintage stuff in an amazing colour that is predominantly turquoise but has vivid purple aspects) and set to it. 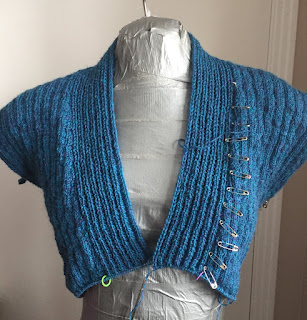 Aaaand I got down to about an inch into the "skirt" part of the pattern before abruptly having to stop. Now my timing is off for this to be finished in time to wear in late winter/early spring 2017.

Stay tuned - I am pretty sure that knitting will be excellent physiotherapy once this blasted cast is gone.

So I broke my wrist. Unless you have done this yourself, you likely are not completely aware of how very useful your wrists are. I wasn't either. Luckily it's my left wrist and I am right handed. However, that left hand? It's also extremely useful. It is a very good helper to that dominant hand.

All those things I like to do: sewing, knitting, skiing, curling, swimming? All off the agenda for 6 weeks. My timing? Impeccably bad: the first day of my annual 5 weeks of leave from my office job. During which I planned to do what, you might ask? Answer: sew, knit, ski, curl and swim.

I BEGGED to go back to work, believe me. I will take my time off after I heal, thank you very much! (At least I can still think; and my typing while awkward is improving.) 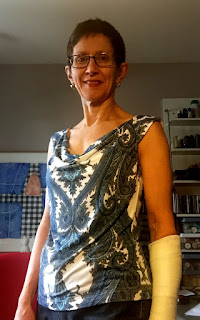 So, I'm three weeks in. My wrist is definitely getting stronger. I thought, perhaps I could sew something. And I did. I made this top. It took me at least three times as long as it would if I had two fully functional wrists, but I did it.

This is a pattern from an ancient Burda World of Fashion magazine (December, 2005, #111) that I've been meaning to make for ... 11.5 years apparently. I finally got around to it.

As Burda conceived this top, it was made from a woven (front cut on bias) and it had a waist band/tie affair. I made it from a knit (thin, drapey) and lengthened it to be a regular hemmed knit top.

As is usual, I ignored Burda's actual instructions and improved the garment. I doubled the shoulder/sleeve pieces instead of making them as Burda instructs (fold edges and topstitch). I used some white power mesh for the second layer rather than self fabric since I wanted them to be firm and stable but didn't want any show through. I used a strip of self fabric (cut lengthwise from the selvedge) to create a firm edge at the back neck and under the arms (Burda called for bias strips here). 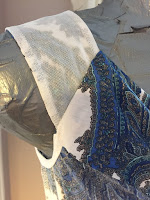 And I extended the self facing at the cowl edge to make it deeper/more weighty and to allow for a clean finish at the junction with the front edge of the shoulder/sleeve piece. At left is a view of the front shoulder area (wrong side).

The fabric is a miscellaneous knit print which wasn't really a very good choice for a sewer with only one fully functional wrist. Its slipperiness augmented the degree of difficulty. However I am satisfied. I managed to cut the garment with the pattern centred, both front and back. I remembered to think about what bits of the pattern would be hitting what bits of my anatomy. I managed the tricky bits to produce an acceptable (not perfect) outcome. I did it more or less one handed. And I have enough of this fabric left (which I really love) to make another top!

For my next trick, however, I plan to work with a stable woven.
Posted by KayY at 8:13 PM 15 comments: