In lieu of actual sewing results ...

The Sewing Lawyer will write instead about sewing process.

I have learned over the years to take my time in the preparation of my projects.  Before actually starting to sew Vogue 8718 and its coordinating skirt, I had to: 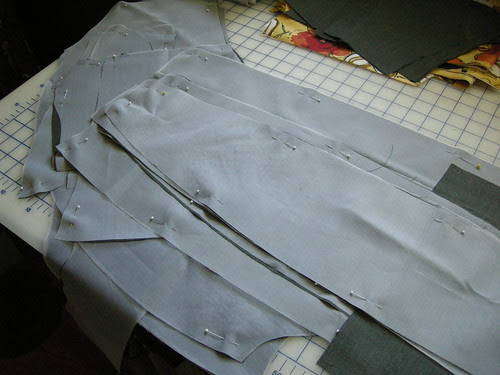 Right now, I am at the stage of having pinned the organza underlining to the wool.  True confession time:  I am not going to hand-baste the organza to the wool along the seam line (!!) - I am going to machine-baste.  So far I am still of the view that life is too short for hand-basting and thread-tracing and the like.  I've had entirely acceptable results before without having resorted to these somewhat laborious techniques and I'm not convinced that the effort is worth the possibly-more-beautiful results.  Feel free to try to convince me otherwise...
Despite my unwillingness to go to the trouble of thread-tracing, I have (as you may be able to tell from some previous projects) come around to the view that an aversion to hand-sewing is not consistent with my objective of producing well-sewn and properly-finished clothing.  I took an on-line class from Susan Khalje last year through PatternReview.  It was just in time for to give me what I needed to know for making my not-necessarily-black-not-necessarily-a-dress cocktail outfit for last year's PR Weekend in Montreal.
Two things of which I am now completely convinced re hand-sewing:
And there is one thing I am not completely convinced of yet, but am working on: 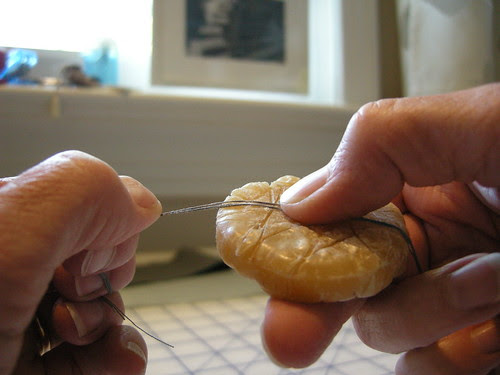 Here's how to wax thread.  Cut some lengths of your chosen colour, about 40-50cm (15"-18") long.  Hold them firmly at one end, and pull them through a block of beeswax.  You can see I'm holding the thread against the wax block, and pulling down slightly as I pull the threads through.  Repeat a few times, to ensure that there is a more or less even amount of wax on all the threads for their entire length. 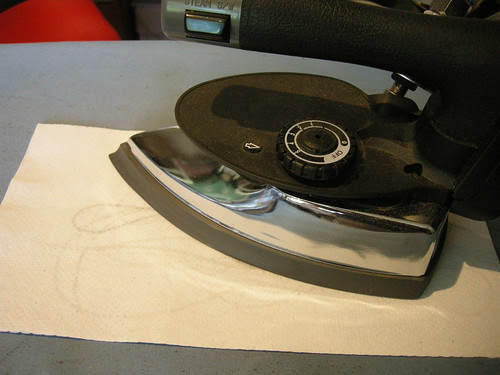 Then put the thread between two sheets of paper towel.  Go over the paper towel with a dry iron.  You'll see the shape of the threads on the outer sheet as the wax melts into the thread and onto the paper towel.
Simple.  The result is a slightly stiff, strengthened and smooth length of thread.  It's easier to thread your needles with waxed thread, and generally easier to use. 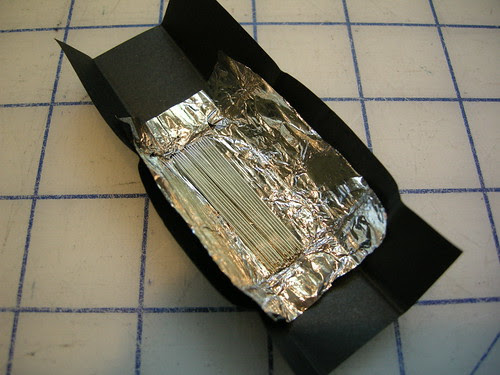 I splurged on some Japanese hand-sewing needles which I purchased from Susan Khalje.  They are pretty expensive if you measure by the pound but I figure one package will last years if not my lifetime. These needles are very fine but strong, with a tiny hole (good for hand-eye coordination) and they feel very luxurious somehow. 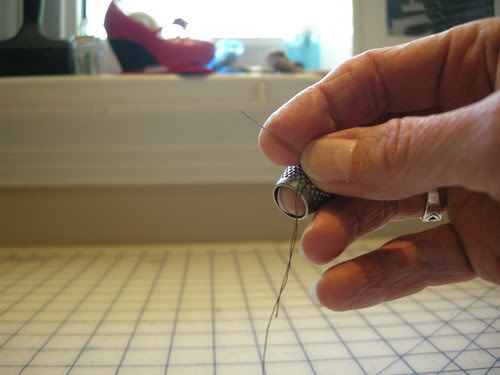 The whole thimble thing still feels very awkward but I am going to persevere until I get the hang of it and it seems natural.  I was doing some hand-sewing recently without a thimble and managed to practically shred my fingers because the fine ends of the Japanese needles are quite pointy!  I do not think I could tolerate the standard closed-end thimble but in my sizeable thimble stash there was one little tailor's thimble with an open end which I like a lot better.
Googling "tailor's thimble" reveals that they are available for sale in different sizes, and how to use one.  Based on the pictures on the English Cut, I clearly need to work on my technique.
Posted by KayY at 3:19 PM