More patterns from my past

Let's get something right out in the open - the Sewing Lawyer is not above shopping in thrift stores or accepting into her life items that were picked up at the curb.  It's astonishing what people will give or throw away.

As has been mentioned in these virtual pages before, the Sewing Lawyer's parents seem to have tossed out many of her cherished sewing patterns from when she was a teenager.  This happened so long ago that it ought to have been forgotten (those teenage years were in an era now known as "vintage"), and in reality of course I'm just having a bit of fun with the idea of wistfully yearning towards those semi-ancient styles.  However, truthfully I would welcome many of those patterns back into my over-stuffed pattern drawers, for old times' sake.

So imagine The Sewing Lawyer's delight when her husband (who thrift-shops so effectively he is practically a pro at it) found a pattern-stuffed basket sitting beside the curb one day (a few years back). The first funny thing about this story is that he was originally attracted to the lidded woven basket, because he recognized it as the twin of a basket in  the sewing room at home.  The second is that the patterns it contained were, in many cases, equally the twins or close relatives of many in The Sewing Lawyer's own past, and they were her size!  Cue up the theme from The Twilight Zone...

Here are a few examples. 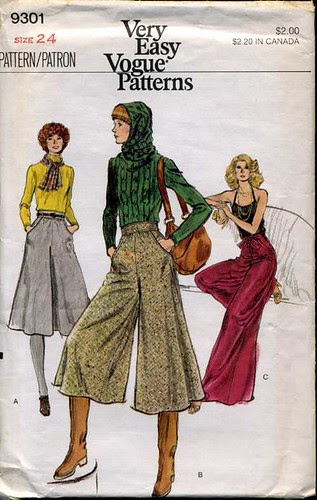 Vogue 9301 dates from the mid-1970s, and I made the knee length culottes when I was in first or second year at the University of Toronto.  That was either 1974 or 1975.  They were scratchy wool, a herringbone, if memory serves, and supremely comfortable except for their itchiness.   These days I'd choose to line such a fabric, but then I was all about getting it done, and outward appearances.  I did not own a cable sweater with a cowl neck big enough to wear as a hood, but did coordinate them with turtleneck sweaters and high boots, as I recall.

I should make them again, I've often thought (BTW my copy is size 10). 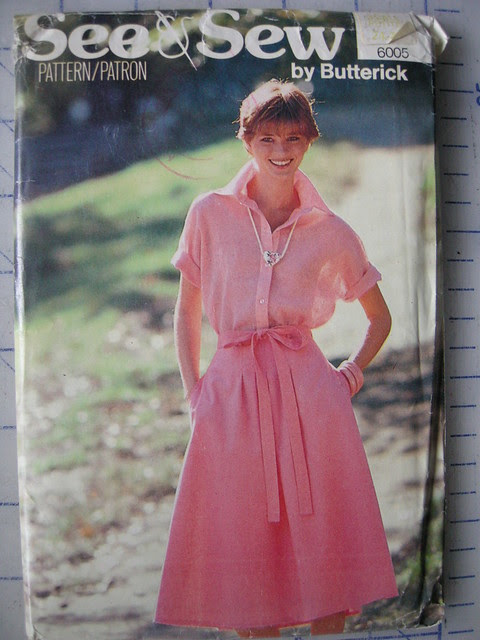 Then there is this wrap skirt.  I rarely purchased "See & Sew" patterns but I adored the photo on the front of this one. I made the skirt from a light bottom-weight warm beige poly-cotton and I took it with me on my solo trip to Europe in the summer of 1978.  It was perfect - went with anything, did not wrinkle, was modest enough to wear in churches and dressy enough for anywhere a backpacking student-hostel staying girl was likely to go, and drip dried in a matter of minutes, it seemed.  The back wrap is generous enough that wearing it in the wind was no problem, and the ties are definitely not skimpy.  What a great skirt (sigh).

I should make this one again too.  The pattern from the basket is still in its factory folds. 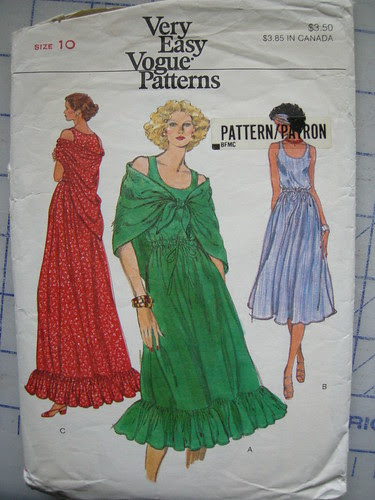 The third example is a simple dress gathered via elastic at the waist, which also hails from the mid-1970s.  I made Vogue 9467 from a black and cream narrow-striped lightweight polyester fabric.  I remember thinking it ought to look more elegant.  I think my disappointment was a product of poor fabric selection and I do not think I have ever purchased such a difficult, staticky and generally flyaway fabric again.  I didn't wear it a lot but I've always had the nagging feeling that it could be a fantastically wearable dress made from something more suitable.

Maybe I have such a thing in my stash.

Or maybe I ought to get back to my grey summer suit...
Posted by KayY at 3:09 PM