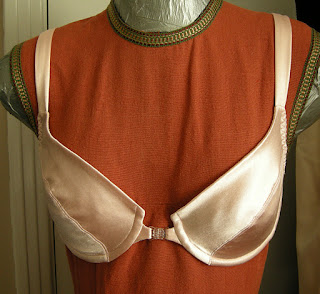 Following hot on the heels of yesterday's post, here is The Sewing Lawyer's latest custom-made bra - all done!  It is not perfect but definitely wearable.

The cups and straps are made from shiny and stretchy pink satin.  It has a lot of stretch in the width and hardly any in the length.

Inside the straps (cut on the lengthwise grain) is a layer of duo-plex to ensure they won't stretch.  It pads them very nicely.  The bridge is also underlined with duoplex since you absolutely don't want any stretch there.

Inside the cups is a layer of flesh-tone power net.  I used a triple-stitch zig-zag to flatten the lining seam. The outer cup seam is flattened with the traditional line of straight stitching about 2mm away from the seam, on either side.

The least satisfactory part of this bra (construction-wise) is the seam along the top of the cup.  I used a stretch stitch to join the satin to the power net, and understitched with a straight stitch to keep the lining from rolling to the outside.  This edge would look better if it was finished with elastic to stabilize it.  It stretched slightly in construction, even though I cut the upper cup with the DOGS (direction of greatest stretch) perpendicular to the edge and seam to minimize the likelihood of unwanted stretching.

The fit would be better if the bridge (the little piece at CF between the cups) was narrower.  I don't know if this is possible, since it has to accommodate the plastic clasp and it would be even more difficult to sew if it was smaller.  Future bras will close in the back so I can better control the bridge dimension.

This bra is a modification of the Sharon front closing bra from the Pin Up Girls line of Bra-Makers Supply but, as explained yesterday, the Sharon cup wasn't doing anything for me so I subbed in the cup from a bodysuit pattern in the June, 1996 issue of Burda Magazine.

Before starting I read up on converting styles in the Bra-Makers Manual (also available from Bra-Makers Supply) and I added 1/4" (7mm) to the lower edge of the cup pieces to ensure there would be enough room for the wires inside the cup.  This is needed because the Sharon is a partial band style (the cups are not sewn into a fabric piece) whereas the front of the Burda bodysuit pattern functioned like a band in relation to the cups.  In a full band bra, the wire sits outside the cup below the seam joining the cup to the band, but in a partial band bra, the wire must be accommodated inside the lower edge of the cup itself. 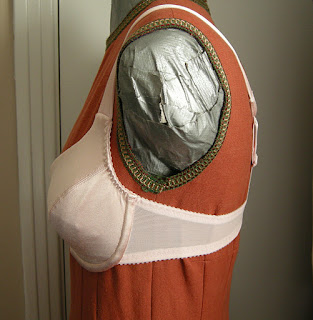 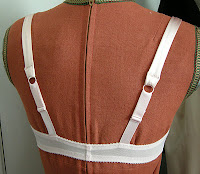 The band is cut from pink power net which was in the pink bra kit I bought.  Unfortunately I had to cut it with a CB seam since the piece supplied wasn't long enough to put the full length in the correct direction (the DOGS need to be horizontal so the bra band stretches comfortably around your ribs).

An aside:  In a comment on my review of the Amanda bra pattern, Squirrelypoo (of FehrTrade) wondered why there was a side seam in the band on that pattern.  I think it's because the front band of a full band bra cannot stretch but the back band must, so they must at least be cut in different directions even if you use the same fabric.  The pink bra doesn't have a front band and the back band connects directly to the cups with no extra seam.

I notice there's a new pattern on the Bra-Makers site designed for foam cups - the Anita, which is made with stretch lace.  But there's definitely another pink bra in my future before I need to buy new supplies.
Posted by KayY at 9:15 PM