How do we choose our projects?  As previously explained, I had this teal ponte de roma knit and had thought to make a simple, unlined jacket.  Something I could throw on when the AC was too frigid, or to dash across the street to get a coffee.  It would look good with some dresses in my closet, and (of utmost importance) it would be easy to wear.  I was leaning towards making Simplicity 3631 when suddenly, and without warning, Vogue 2942 leapt out at me.  I had to make it.  I'm not sure why. 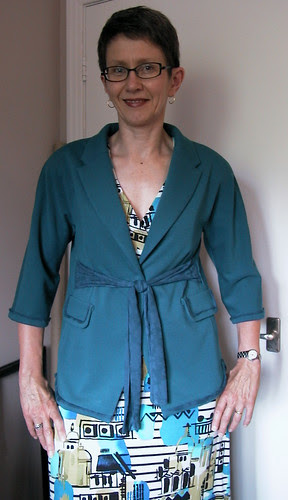 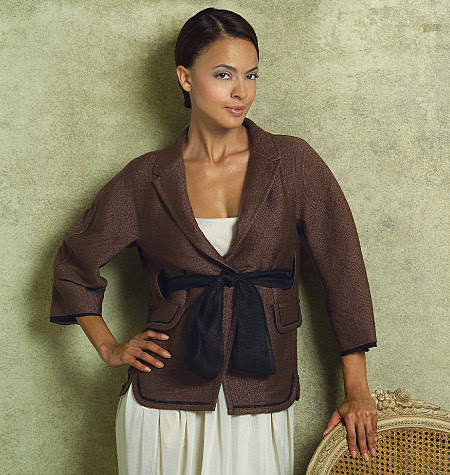 I do believe Vogue has engaged in a little pattern manipulation to ensure that MV does not bear enough similarity to VV to be cute and perky instead of .... bathrobe-ish.

The VV is visually square and blocky - looks fresh.  The MV not so much.  It is rectangular and droopy.

Both jackets are cut in the middle by the tie belt, but the MV tie is lower on the body.  The pocket flaps are higher on the VV.  The tie belt is shorter on the VV.

Partly this is explained by fabric choice - the VV is evidently made of a crisp silk whereas I chose a drapey knit.  But I think the proportions are off.

The VV is a veritable sampler of weird sewing/finishing techniques, some of which I chose to ignore.  Thinking about trying to describe them all makes me tired.  So here are some details of MV: 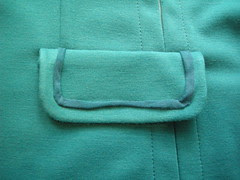 Pocket flap - This is a single layer of fabric with an applied facing edge, into which the trim is inserted.  The edge of the edge is raw, the trim has raw edges (VV had bias-silk Gazar; I used a thin jersey knit). 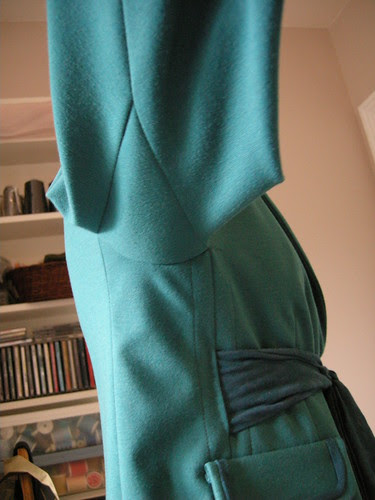 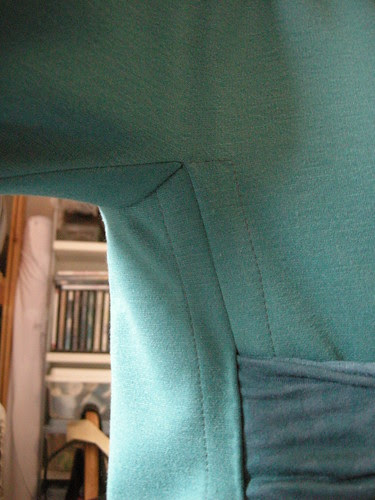 The underarm gusset and side panel.  The latter has wide 1" (2.5cm) seam allowances which are topstitched (I used a triple-stitch about 4.5mm long).  You leave two openings in this seam - the upper for the belt and the lower for the pocket (the flap is decorative). 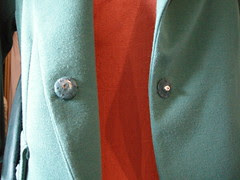 I had to tack the belt to the back of the side seam opening to keep it from rolling down to the bottom of the opening, making the jacket look even more bathrobe-ish.


A covered snap at CF.


I'm moving on.  Time to tackle the Jalie jeans pattern, and I need a nice pair of shorts.
Posted by KayY at 4:12 PM