A combination of favorite things

There is a lot to be said for re-using a pattern that's (a) simple and (b) classic.  Even more so if it's a type of garment you like to wear.  As the Sewing Lawyer has arrived at a certain age, she has come to appreciate sleeveless shirts and tops.  Even in the depths of winter, when the freezing winds howl around, she has found that a lined wool top is quite comfy to wear and permits climate control when paired with a long-sleeved jacket.  For summer, bien sûr,  the benefits are truly obvious, especially when it's a crisp cotton shirt.

The Sewing Lawyer is also a sucker for a really nice batik print - especially one that's an overall repeating block print in indigo and white.  Recently while in Saskatoon, there was a flying visit to the lonely downtown fabric store, Unique Textiles Studio (on 1st Ave.).  Like so many others, this store specializes in quilting cottons of a good quality, all neatly displayed in colour-coded or print themes.  Snagged!  Some  indigo and white block-printed floral batik came home to the Nation's Capital, earmarked for a sleeveless shirt from a previously-tested vintage Simplicity pattern.

Speaking of the Nation's Capital, I came across this quaint YouTube video about my home city originally filmed in the late 1940s - though it's older than my vintage pattern, the scenes of the Parliamentary precinct and Rideau Canal, the War Memorial (seen from the roof of the Chateau Laurier) and the buildings opposite, are unchanged to a surprising extent.  Except, NB, we pronounce the canal's name REE-do, not ri-DOH; you don't see red-coated Mounties hanging about in random fashion; the rowers in the Ottawa River will surely be in modern racing hulls; and that interesting diving (?) platform is no more.  It's a great place to live.


But I digress.  Of course, the OOP Simplicity pattern was approximately 3,000km away from the place in which a decision had to be made about how much to buy.  It turns out the pattern calls for 1 3/8 yards (1.25M).  Oops.  After pre-shrinking in the washer and dryer, there was exactly 101 cm of this crisply-wonderful fabric which gave rise to a few anxious moments but in the end, only necessitated a VERY efficient layout and piecing of the under collar.  There was enough (in the lower left corner) to cut bias strips to face the arm openings instead of the facings that Simplicity wanted.  And the CB could be placed on a  natural break in the printed pattern (you can see that the selvedges are slightly offset; that's why). 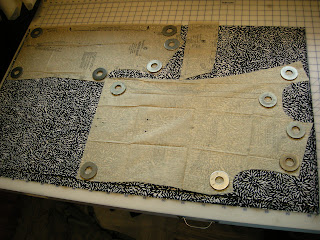 If you click on this photo to enlarge it, you can see why the print was so enticing. 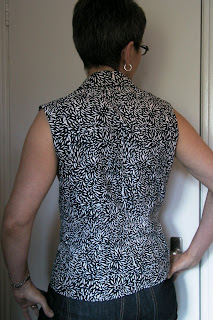 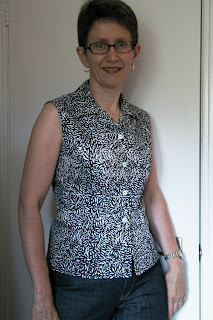 So here's the finished shirt (worn with Jalie jeans #1).

It made up super fast (or would have if The Sewing Lawyer's day job hadn't interfered) and has that lovely crisp quality that makes for such a great summer garment.  It's getting hot again this week, so it will have some more outings before the leaves start falling, to be sure.
Posted by KayY at 2:47 PM