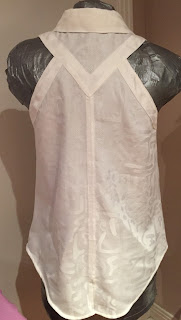 I was so taken with my new Donna Karan shirt that I decided I should immediately alter the pattern and make another. This time, a white one as per the pattern envelope.

Fabric came from stash (natch!). I got it at the Fabric Flea Market and had thought it was cotton, but having worked with it, I'm not so sure. It has a really soft hand and loses the crispness of a recent press really fast. As you can see at left. It has a really interesting woven-in pattern that's somewhat shiny. With typical Sewing Lawyer compulsion, I matched at CF and CB. Not that anyone will ever notice...

The alterations I made were, in the end, just three:


I originally thought the underarm was way too low, but taking it in took care of that problem.

I took a few photos of the construction of the back yoke/arm opening bands. Ignore the Vogue instructions and do it my way instead! 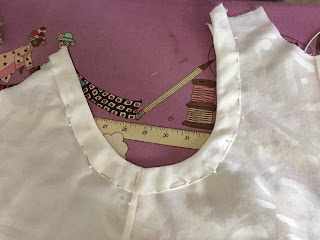 Front and back bands are seamed and attached to shirt at arm opening, RS to WS, turned and pressed. The other edge of the band is turned under and pinned down.

I've left the last few cm unattached at the front shoulder edge. This will allow you later to sew the shoulder seams of the shirt body and bands separately for a better shoulder finish.

Vogue says to complete all topstitching at this point but don't! Topstitch the back to side seam only. 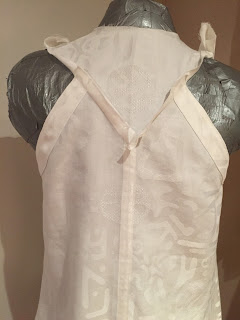 At right, I've sewn the shirt shoulder seams (French seams) and attached the back triangular yoke, WS to WS. It helps if you've left the CB seam unsewn in the seam allowance area. 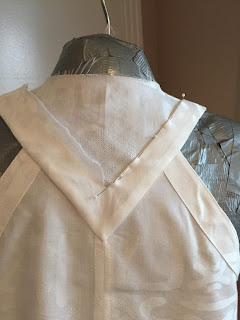 In the photo at left, I have also sewn the shoulder seams of the bands (regular seam, trimmed and pressed open) and I've attached the back V shaped band to the back yoke.

With this construction order, you can sew the bands continuously from in front of the shoulder, over the shoulder and down to the point of the V. You do have to do this in two passes.

The trickiest part is the V point itself. Precision sewing and lots of trimming are essential. 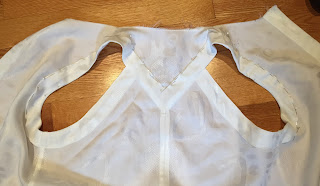 In the shot to right you can see the preparation for final toptitching. This construction method allows you to start at the right underarm and topstitch continuously through the V and to the left underarm.

You'll see this shirt again on this blog ... soonish.