My last post that was actually about sewing involved the architecture of a bra.  Thank you to those who commented and provided food for thought.

I overthought the whole bridge thing and tried making it even wider.  Wrong!

I did some internet research, and read into the details of Beverley Johnson's book.  I also borrowed the Lee Ann Burgess book Making Beautiful Bras.  (Horrid picture on the cover.)

Recall that my problem was that after I widened the base of the bridge, I had a flat area inside the wire at the CF and lower edge of the cups.  The first comment was to the effect that because the widened bridge had the effect of rotating the cups down and towards the outside of my body, I might need to remove fabric from the cups.  The flattening could be a symptom of too much fabric.

Similarly, Johnson wrote that "too much depth in the bra cup will manifest itself as a flattened area of fabric right above the middle of the bottom of the cup".

Promisingly, the Burgess book had a section on "An Underwire that sits Down on the Front of the Chest". Her diagnosis?  "This annoying problem can be caused by a number of factors: either the wires are too deep a U shape, ... and/or the cup volume may be insufficient, and/or the cup shape may be too shallow and/or the breast may be drooping within the cup due to a very loose, slack lower cup."  Oh boy, even the experts may not know where to start!

Long story short, I pinched out fabric inside the wire to make the lower cup smaller, and I think it worked. I'm wearing the second and most modified bra now, and it's pretty comfortable, and it is not slipping downward in front.

The most you are going to get are these crappy pictures on my DTD.  Please believe that both bras fit my flesh and blood much better. 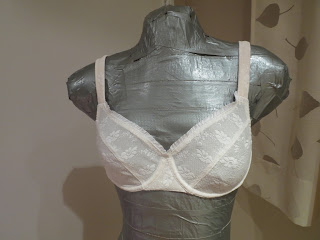 First bra, in white.  The ruffly trim was leftover from a BraMakers' Supply kit.  For straps, I used a strip of extremely firm power net covered with the fashion fabric.  They are kind of thick, but they work. I did not bother with rings and sliders (I'm making it the right length, right?).  This bra has some depth taken out of the cup next to the bridge but the lower curve of the cup is still a bit too deep.  However, it's not bad. 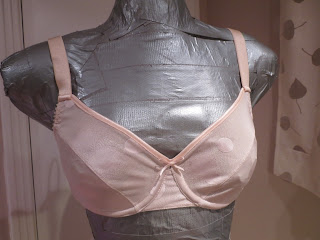 Second bra, in nude (the next pic shows the colour better).  This is a lightweight type of power net with random satiny spots.  I used fold over elastic to finish off the upper edge of the cups and wide strap elastic for straps (again left off rings/sliders).  The band is slightly snugger and the straps slightly shorter than bra #1 and I like that snugness.

The pattern for this bra is close to being just right. 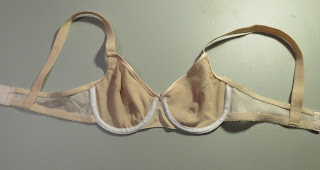 Inner construction.  The cups are lined with a very lightweight flesh-tone mesh.  The bridge is stabilized with firm fusible attached to a lining.

All materials for these were in my (ahem) extensive stash.  However I am now out of wire casing.

This weekend I'm headed to Kitchener Ontario to visit my cousin and his knitter wife.  On Saturday, she and I are going to the Knitters' Fair, reportedly the largest event of its kind in Canada, with "35,000 square feet dedicated to the craft of knitting, offering an incredible display of a diverse variety of yarns in an explosion of colour, knitting books, patterns and accessories."

I'm expecting it to be a lot of fun!