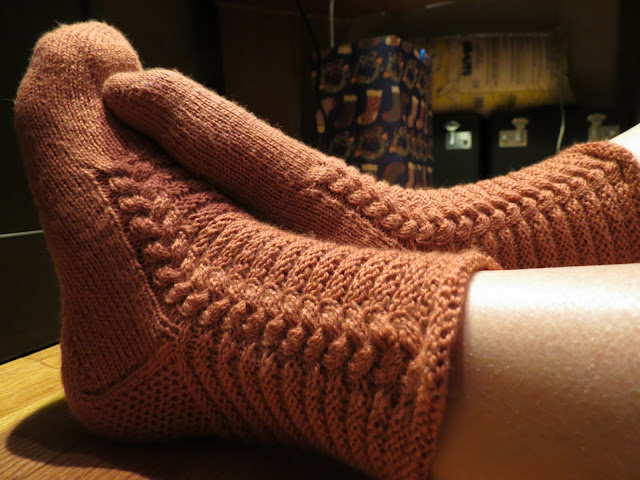 These are from Cat Bordhi's book New Pathways for Sock Knitters (Book One) which is the only book one needs to make perfect-fitting socks, in my opinion.  They took a very long time because I got tired of the cables.  But now they're done and I'm very happy with them.  The next ones I make are going to be very plain.

Don't worry, I've also been sewing and the skirt is progressing nicely.  Thanks to the perceptive comments in my last post and further inspection of my muslin (in which I sewed the waistband without any difficulty) I realized that the problem was that I had basted the lining and fashion fabric together (as Vogue instructs in step 18).  It is MUCH easier to sew the waistband on to a single layer.  Serendipitously, doing so also means that both sides of the waistband can be clean-finished by machine. I'm always in favour of that.

Here's a sneak peek of one side of the waistband.  The lining is at top, CB is to the right.  The waistband is folded along the dotted line.  I managed to get all four corners just about perfect, so I'm  happy.

To the commenters who suggested that it would be easier if the waistband was sewn to the top of the skirt first, and the diagonal seam sewn last together with the dart, I think you were definitely onto something.  Vogue instructs sewing these darts before the skirt pieces are sewn together (which I had done) but I don't see why they couldn't be left to later.

I'm not usually a slave to pattern instructions and these were bad ones to follow slavishly.  This is a beautiful skirt and Vogue was not kidding when they said the pattern is "Advanced/Plus Difficile".  But better instructions would have been a good idea.

Right now I'm inclined not to do all the topstitching Vogue is asking for.  My fabric is a plush cashmere (yummy) and so far I've just topstitched (rather than topstitched and edgestitched) the major skirt seams.  The stitching makes for a nice texture but the darts and seams also show up well as you can see in the picture.  According to Vogue, I should also topstitch the darts and the lower edge of the waistband.  Thoughts?