This phrase was oft-repeated during the four days I spent working under Kathryn Brenne's supervision at her fantastic and well-equipped sewing studio in North Bay Ontario last week.  Kathryn has endless patience and seems unfazed by any mistake or imperfection her students turn out (and there were some).  And you know what?  I think she's right - my leather jacket (which I shall finish once my teflon foot arrives from Mr. eBay) will be fine.

I did in the end go with the Material Things Fearless Jacket pattern.  Kathryn mostly approved of the fitting changes I had made but on her recommendation I trimmed up the pieces even more.  The first day of the class was mostly taken up with finalizing the pattern changes, and then making brown paper pattern pieces (doubles so there's a right and a left of everything for single layout on the skins).  I had cut out some of it by the end of that  day.

The second day was occupied with cutting out all the jacket pieces and interfacing, and fusing the interfacing where it needed to be fused.  I had assembled the backs by the end of that day.

On day three I felt brave enough to tackle the invisible zipper pockets and assemble the jacket fronts.  Day four involved sewing the sleeves and setting one of them in, inserting the front separating zipper, and almost completing the facings.

It doesn't seem like I did a lot each day, when I write it out like that, but believe me these were full days of sewing and associated learning (9AM to 5:30PM, with breaks for delicious homemade snacks and lunch).  Of course if I had known what I was doing, I would have been more efficient...

Anyway, here are some photos of the sewing studio.  It's on two levels. 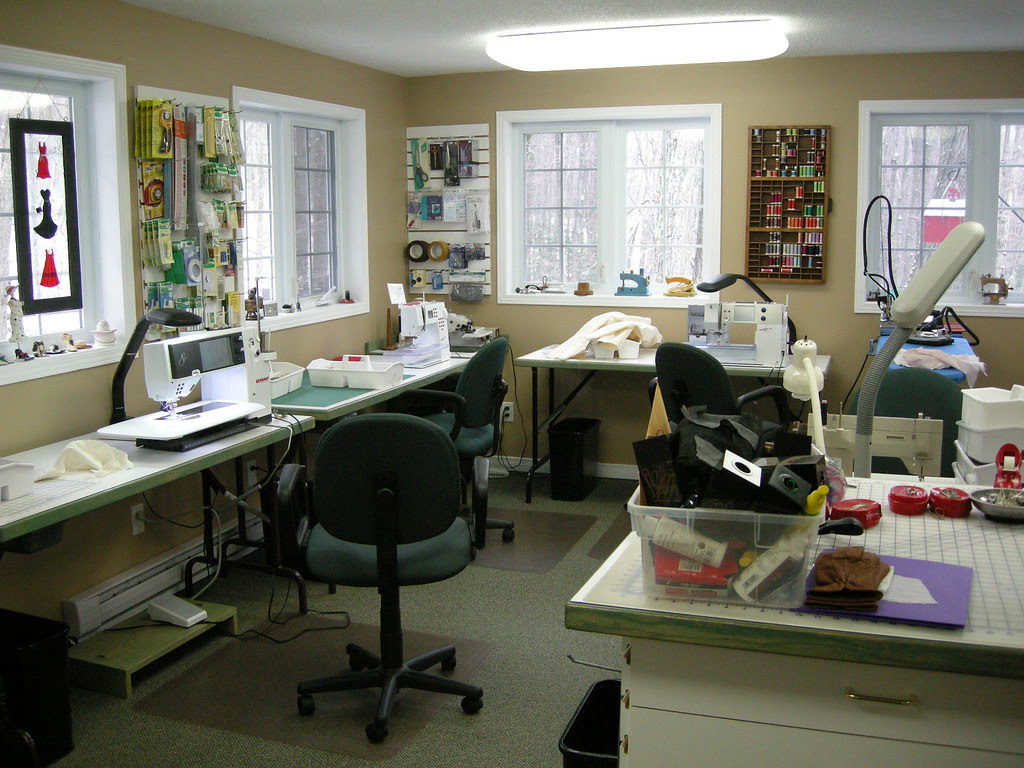 Upstairs are the latest Berninas.  Kathryn invited us to choose any one of them - I tried out the 640. 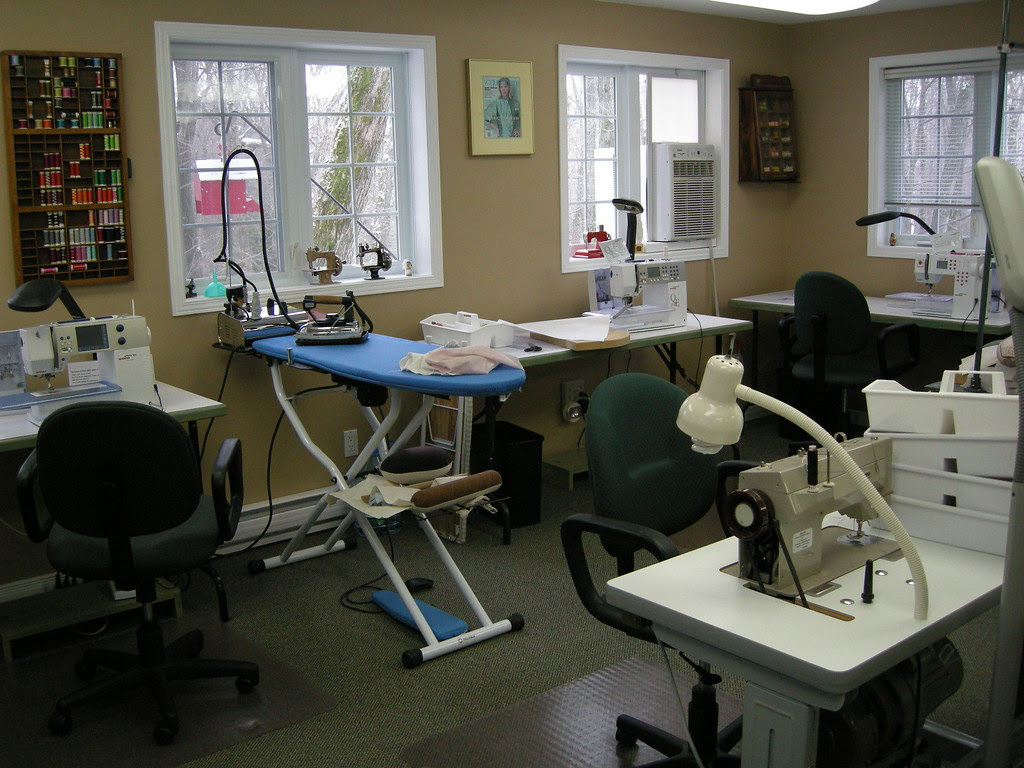 She also has two steam generator irons and a full kit of tools for every table. 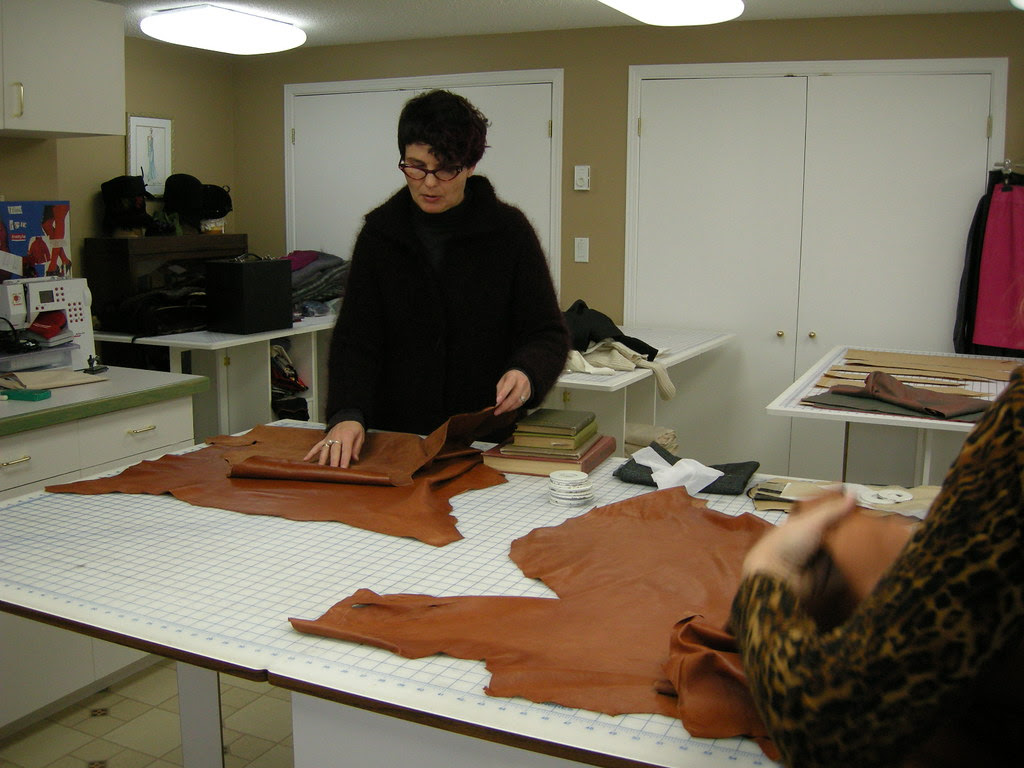 Downstairs are the cutting tables, including one that was big enough for me to lay out five lamb skins at once.  Here, Kathryn is examining another student's skins and talking about leather quality.

Kathryn is extremely generous with her knowledge and brought out numerous things for us to ogle and examine, including the fannnnnntastic sheared mink lined coat which is featured in the latest issue of Vogue Pattern  magazine! 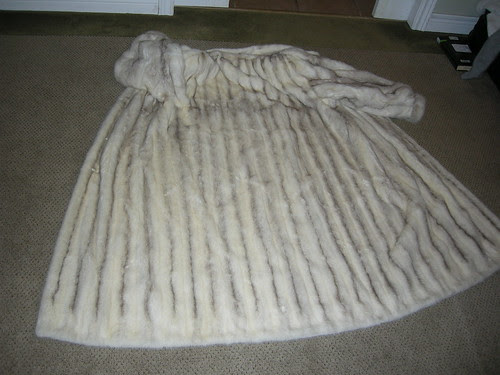 I was so inspired that when I spied an XL sized mink coat in good condition at the Value Village that night, I snapped it up.


That's it for now - stay tuned for pictures of my jacket in progress.
Posted by KayY at 10:19 PM