First up, I made silk chiffon scarves based on the "Quick to Make" feature of Threads Magazine in the October-November 2003 issue.  I've scanned the instructions and they can be found here:  Page 1; Page 2.  The Threads instructions are fine if your 2 fabrics are the same width.  However, if they are not you have to sew them together before making the centre loop.  I did it this way:

I used a short 1.5mm stitch length to sew the seams, then sewed a second line of stitches parallel to the first, approximately 2-3mm away from it.  Then I trimmed the seam allowances very close to the 2nd line of stitching.  For the hems, I used a narrow 2-thread rolled hem sewn on the serger. 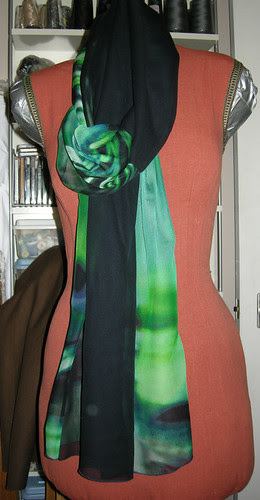 I had fun choosing the chiffon fabrics to coordinate. 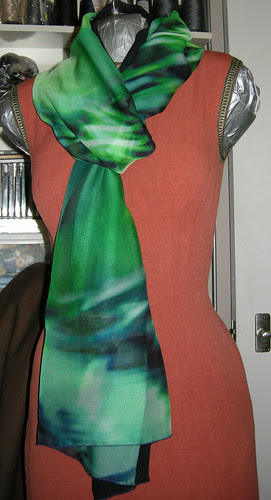 When worn, the look varies pending on which side of the scarf is worn "out".


Here are the other two. 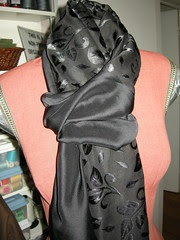 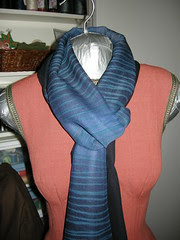 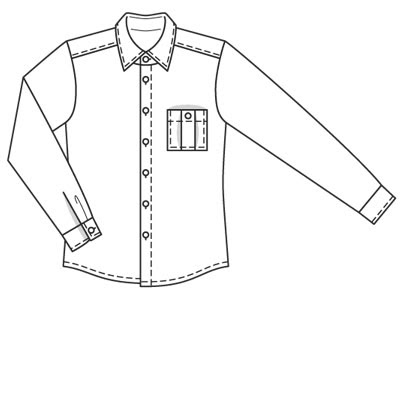 I am also almost finished a shirt for my son.  I picked up some lovely plaid Viyella (cotton & wool) at the Fabric Flea Market this year.  I'm using a pattern from the March, 2009 issue of BurdaStyle (as they now insist on calling it).  Here's the line drawing.
It's a perfectly ordinary men's shirt.  It's described as "slightly fitted" and has 2 vertical darts in the back, which I did not sew.

Now my fabric is an even plaid and I carefully matched it while cutting - except I FORGOT to think about how there should be a smooth match at the CF.  ACK! 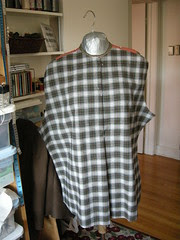 So here's the shirt fronts showing how the unmatched fronts end up with two heavy dark vertical lines running together.

And here is my fix/disguise.  I cut a bias band for the CF which fills the space between two dark vertical bands perfectly, and disguises the fact that the whole thing is off centre.  HA!  When the buttons are on, the disguise will be perfect! 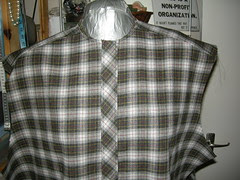 I like the collar technique from this book - for once the collar stand curves smoothly down to the front edges - no ugly lumps and bumps. I'll post pictures of the finished shirt with details soon, but here is the method. 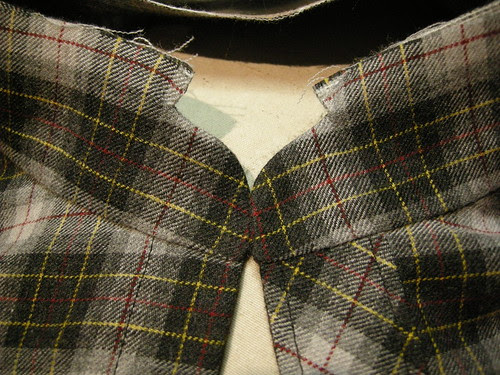 I did the second one properly, and I even remembered to scootch the top collar down so there would be room for the turn of cloth once it was sewn into the stand. 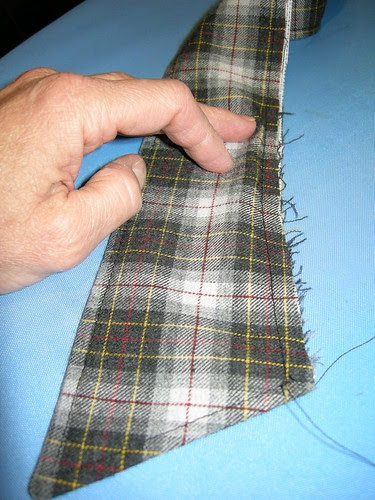 Here's a picture.  Hopefully you can see that the top layer is bigger than the bottom layer.  When this is folded down inside the collar stand it lies perfectly smoothly with no rippling and no bulk underneath.  Magic!

The collar is then sewn to the inner stand (top collar to inner stand) and the outer stand seam allowance is simply pressed down and the whole thing is edgestitched.

At this point  I have the shirt mostly finished - just the buttonholes and buttons to do.

I used my seam ripper A LOT while sewing this shirt.  However, it is turning out well.  I SURE hope it fits and he likes it!