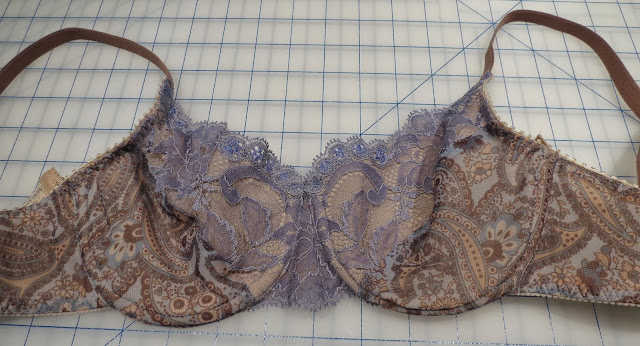 This is quite unlike The Sewing Lawyer's usual undergarments.  It's more colourful and lacier.  More ... delicate?

But still sturdy enough.  Here is a shot of the inside. 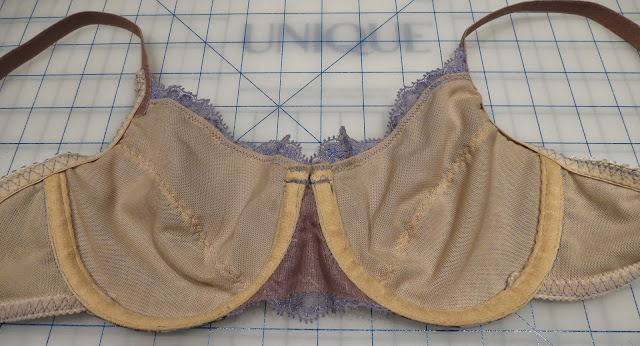 The mesh fabric and stretch lace (ordered on-line as a bra kit from Merckwaerdigh in Rotterdam) are pretty flimsy, when you get right down to it.  So I lined the entire bra with a light stretch mesh acquired a forgotten time ago from a forgotten source.  Luckily, I have lots.  Because I think I've been bitten by the lingerie bug. There was enough of the lace to cut out another bra.  The next one will be entirely blue lace, but lined like this one.  I have a RTW bra that uses stretch lace, with scalloped edges intact, for the side pieces.  I'm copying that.

A word about the supplier - Merckwaerdigh's supplies are reasonably priced and (I hate to say it) less expensive even including international shipping than Bra-Makers Supply in my home province. The kit included enough lace for two bras - even enough to mirror the motifs for both, enough printed mesh for at least one pair of panties plus bra(s), elastic - 4 kinds including for straps, stable mesh to line the bridge (you can sort of see it in the second photo) - enough for dozens more bras, a little piece of crotch lining, hooks & eye for the bra, loops and sliders for the straps, and wire casing.  And the shipping was quick, and you can save on shipping (relatively) by combining items.  I also bought a set of findings in white and wire casing in 3 colours (white, black and nude).  I'm a satisfied customer.

That said, I'm pretty sure I have enough lingerie notions now to last the rest of my natural life so they may not get much more of my business.  Especially since I came across about 9,000 metres of 1cm wide elastic at the Value Village on the weekend (exaggerating, but only slightly). See previous post re SABLE.

And a word on the pattern.  It's totally customized.  The cups are from an ancient Burda WOF (as it was) swimsuit pattern, much tweaked.  The side piece is from a Bra-Makers pattern.

And because I want to reward you for reading this far ... 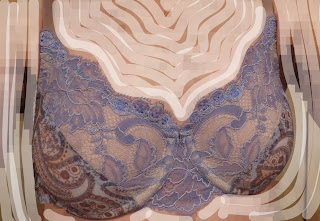 Thanks to the skin-tone lining, it looks even more etherial than it really is.  But it's really not see-through.