This may take a while

I have Beverley Johnson's Bra Makers Manual. I have this pattern from Merckwaerdigh.  I have Demystifying Bra Fitting and Construction by Norma Loehr (of Orange Lingerie) on my iPad.  I have some mixed experience at making things that look like bras. There is this one which, truth be told, is too big and has wires that dig in at CF. And this pink one, which is tantalizingly close if only I pin 2cm out of the length of the upper cup.  I have lots of lycra fabric and elastic.  I think one of my New Years resolutions was to make a proper bra that actually fits.  I am ready to go. 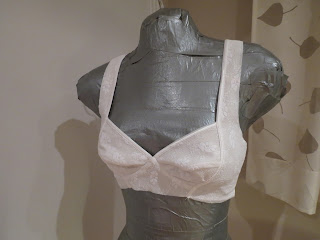 My first outing, the so-called "sports bra" from the Merckwaerdigh pattern, was a bust (pun intended).  A bust nothing like mine.  As you can see. 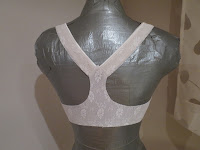 I kind of like the back, but this is really the wrong size (and shape) for me.

This one will not ever be finished.

By the way, bra pieces are very easy to sew together wrong.  Ask me how I know :-)

For my next effort, I have pinned out 2cm approximately from the upper cup of the pattern I used for my pink effort.  At the same time, I've traced a smaller size from the Merckwaerdigh pattern.  This scattergun approach may come to grief.  Time will tell.

Neither of these is getting lining or elastic edging.  I wasted some good FOE on that Merckwaerdigh bra.  I'm making fitting muslins per the Orange book.