Various activities - but not so much sewing

Two weeks of blogging silence is due to the fact that I had a trip to Halifax Nova Scotia last week, partly work (for which I had to use valuable potential sewing time to prepare) and partly pleasure.  I did manage to vanquish the bound buttonholes but got very little else done in the sewing department.

The buttonholes will match the piping perfectly because I am using the same black fabric for both.  Considering that this fabric is pretty ravelly the buttonholes weren't too hard to make.  I used my usual technique except that I did not try to press open the teensy tiny seam allowances because the fabric used for the lips is much less bulky than the fashion fabric.  The fashion fabric fills in the lips very nicely and the relatively thin lip fabric doesn't make the buttonholes feel much thicker than the rest of the jacket front.  Nor did I attempt to sew the ends of the buttonholes by machine, since I thought the tiny triangles would disintegrate with the handling that would have had to happen while I wrestled with them at the sewing machine.  Instead I took tiny hand stitches to finish the ends (short sides) of the buttonhole and then hand back-stitched in the ditch to anchor all layers along the long sides.  I think the buttonholes look pretty good (at least from a polite viewing distance). 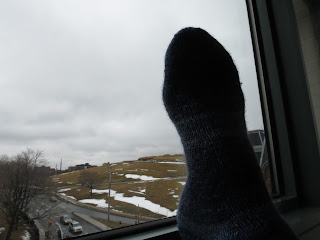 I took some knitting with me to Halifax since my husband wanted to play in an open session at the Old Triangle Irish pub and knitting on a sock would give me something to do (other than drinking excellent beer) while I listened to the music.  It worked admirably well - I both enjoyed myself and almost finished the sock.  Knitting was even a bit of a conversation starter.  (The Old Triangle is a great pub if you are in need of food/beer/musical entertainment in Halifax.)

This is a very bad picture of the sock, but does sort of prove that we had a partial view of the Halifax Citadel from our hotel room window.

As I make more socks, I have learned that a snugger fit is better than comfortably loose.  These are the closest fitting socks I have made yet, so much so that I was a bit worried they would be too small.  But the wool relaxes and the fabric stretches slightly when worn so they are very comfortable but do not slide around when putting shoes on.  I immediately started another pair the same.  This is the "Ridgeline" master pattern from Cat Bordhi's New Pathways for Sock Knitters book.

I've also recently started knitting a summer top in lace weight yarn (slubby cotton) which is scary skinny stuff.  So far I have knit about 12cm from the cast on edge which makes it about 40 rows.  It's quite a different knitting experience, not to mention slow going.  Even sock yarn feels very substantial in comparison.

I leave you with a couple of pictures of The Sewing Lawyer, wearing this coat (perfect for a blustery March day), at Peggy's Cove.  I swear it is impossible to take a photograph there that doesn't turn out looking exactly like a post card or a painting by Alex Colville.