Simplicity has this line of patterns called "Amazing Fit".  They seem to be a collection of good basic designs whose main distinguishing feature is that they include multiple versions of each piece for (above the waist) different cup sizes and (below the waist) for a "slim", average or "curvy" fit.  I'd been meaning to buy #2648 since my friend and enabler G started raving about it as a great pattern.  When G makes a recommendation, The Sewing Lawyer listens.  (Not just for sewing patterns either. Snap major household appliance decisions have been made based on G's seal of approval.)

So it is entirely predictable that Simplicity 2648 did indeed turn into a very nice dress that fits rather well.  The only drama relates to how long it took me to get around to actually sewing this up.  I cut it out along with the grey summer suit on June 12, for heaven's sake. 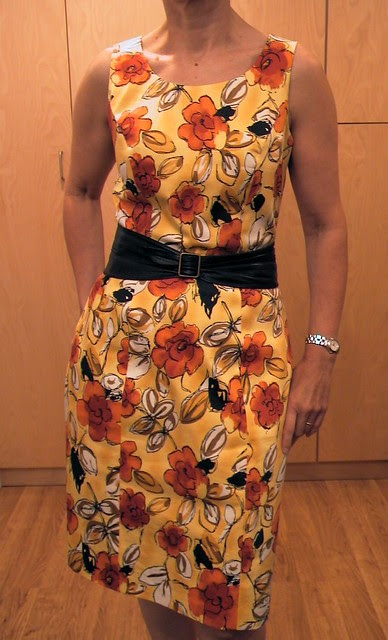 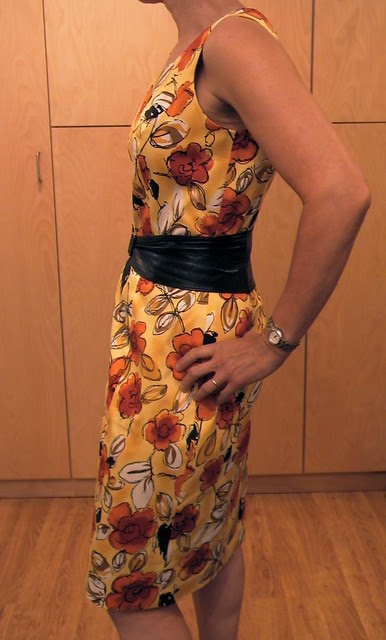 It's not that I'm having a bad hair day. Rather, the headless photos turned out sharper so are better pictures of the dress.  Which is what you are really interested in anyway.

This is the last of the true summer sewing for The Sewing Lawyer.  Maybe there will be one or two warm days in September suitable for wearing such a sunny summery dress.

The dress is made from a somewhat substantial cotton/lycra woven.  I hope it won't be too warm to wear, but its relative stiffness means it'll never cling.

There are princess seams in front and darts in back.  And there's a waist seam.  But you can't see any of them in this busy print.

I cut the B cut bodice and the "curvy" bottom.  The entire difference between the average and curvy bottom is that the curvy back has 4 waist darts and the average only two.  There is an extra .5" at the hip in the curvy fit.

I've had the belt I'm wearing for (conservatively) 25 years, and it wasn't new when I got it.  I haven't worn it in years but would wear it lots now, if it hadn't shrunk in my closet.  I'm going to clone it in a bigger size.