Vogue 1250 comes in pairs.  Like everyone else, I could not quite stop at one.

I whipped this up today out of (as you can see) an outrageously large print.  It seemed perfect for a pattern with hardly any seams.

I stared at the print for a while before concluding it would not be useful to try to actually plan for any part of it to fall anywhere in particular.  And then I blithely folded the fabric and cut the big piece, not particularly paying attention to the print.

Oh serendipity!  Look at how the cowl is nestled in a V in the print!  Somehow my shoulders are both more or less red, and I think that the large motifs worked out well in the front.

Of course, I blithely cut out the big piece, without checking to see if I had a sufficiently big bit left for the smaller piece (upper back).  Um. No.

It has a CB seam, unlike the DKNY original.

At least I was able to more or less match the two halves through the large motif in the centre.

The CB seam in the skirt *almost* matches.  I take no credit.  The width of the dress is what it is.  Actually, I don't much care for how the print falls on my backside, but I don't really have to look at it, so I don't much care...

And I am really happy with how the print falls in the front.

Here is one more tidbit of information about this pattern. 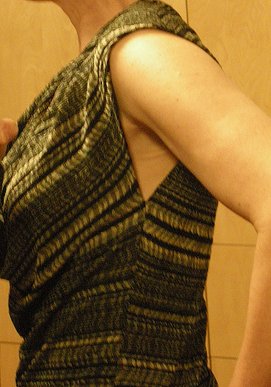 As you can see in the picture above, the original has this rather low V under the arm.  It seemed unnecessary.  So in my new version, I filled it in a bit.  Below is my altered pattern piece.  The front did not get altered at all.  It's basically a smooth curved line from shoulder to waist.  The effect of this extra little wedge of fabric is just that the back attaches higher up.  It also pulls the shoulder down slightly to form more of a cap sleeve, which I like.

The other small change I made was to increase the depth of the cut-on facing for the cowl.  I felt it was at risk of flipping out as originally planned (a depth of about 7.5cm).  I added approximately double that again at CF, tapering to nothing where the facing attaches to the shoulder seam.