I have not knitted for a very long time.  It's because I'm too impatient.  It takes SO long to make the fabric,  in the very shape of the (untested) pattern.  It fills me with dread and despair.  What if it the fabric isn't all that great AND it doesn't fit, or suit the intended wearer?  Ack!  I content myself with buying the fabric, ready-made, which reduces the variables and the likelihood of abject failure.  My oldest (by far) UFO is a knitting project. It has been "almost finished" for over 25 years.

It wasn't always so.  Once upon a time I did knit.  My husband and I spent a year in the UK, during which I was mostly without access to a sewing machine.  And in the UK then, great knitting yarn, and fabulous knitting patterns were easier to find.  The activity of knitting suited those long nights (Cambridge, where we were living, is WAY farther north than any city in Canada where I have ever lived so has WAY less daylight in the depths of winter) in front of our little electric "fire".  I found fabulous vintage knitting patterns, including some gathered into book form and updated.  I still have The 30s Family Knitting Book and The Man's Knitting Book - classic patterns from the '20s to the '50s (both edited by Jane Waller).  Fabulous.  I even made a couple of items out of each.

I was recently reminded in the nicest possible way of my past prowess as a knitter.  Thirty-two years ago I made a little sweater and matching hat.  The set was intended for a first baby about to be born to a relative.  I went all out.  The sweater was mainly ivory, with a Norwegian-type snowflake border that had repeating blue snowflakes (approximately 2.5" wide) with a little red border.  Along the lines of this sweater, only change the colours, and it was a cardigan: 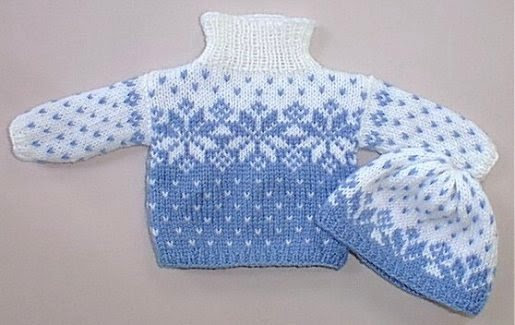 I even knitted the little spots in the body of the sweater (they were blue on the ivory background).  The snowflake border was repeated in a little hat with ear flaps and a pompom.  SO cute!

Well I finished the set before the baby was born and presented it to the parents-to-be, then waited for the blessed event to occur.

You can hardly imagine the mixed emotions which came along with the news that the expected baby was born, beautiful and healthy and ... there were two of them.  Identical twin boys.  I gritted my teeth and made a second sweater set, exactly like the first one except a different snowflake pattern.

Last year, one of the twins became a dad.  They sent a link to some photos on Picasa.  His little daughter looks adorable in the sweater I made for him 32 years ago.  Such a nice surprise to find out they had kept it for the next generation.
Posted by KayY at 9:29 PM

Labels: knitting, My sewing history, Patterns from my past