Patterns from my past ... continued

I'm tired tonight - apparently too tired to sew a Q&D muslin of Vogue 2770.  Again I find myself aimlessly trolling for vintage patterns.  Tonight I'm looking at MomsPatterns.  I like this site because it's well-organized, and the thumbnail photos are a decent size.

I came across a pattern from the late 1960s or early 1970s with a little drop waisted skirt (either pleated or flared) and had an almost visceral memory of a dress made from some sort of sleazy nylon print of the type that was de rigeur when I was in high school, in cheery red, white & blue.  I'd swear I never actually owned the pattern that prompted this reaction but I'll work on the memory and see if it sharpens any.

Anyone who looks at these sites regularly knows that some patterns turn up over and over while others live on only in one's memory.  Obviously the common ones were big sellers in their day.  Some of my past patterns must have been relatively unpopular (perhaps I had off-beat taste) because they are still eluding me.  However, in the offerings for this month, there are two copies of this old chestnut, which I remember making.

Quick!  It's only $6.50 (size young junior teen, 11/12).  I made it when I was in grade 9, I think.  The future Sewing Lawyer chose to make the vest and simple, A-line skirt in a stunning coral-orange hi-lo corduroy.  I think I wore it until the pile came through to the wrong side, I loved it so much.  Who'd have thought that coral corduroy would be so versatile?  (Maybe it presaged my current orange kick...)

Another pattern that's frequently spotted on the vintage sites is Simplicity 6895.  Now this is one that never made it into my sewing room, but I'm still pining for its close contemporary that did - I'm pretty sure it was the same "Designer Fashion" run of patterns, and had the same model (wasn't she just gorgeous?).  Shown in teal, it was a wide-lapelled pantsuit with the waist drawn in through wide elastic sewn through 2 parallel channels.  Sigh...  I'd make it again in a flash, if only I could find it. 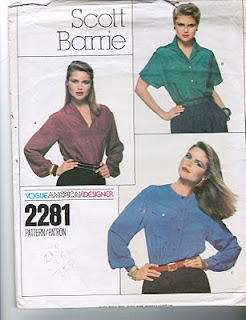 Finally for tonight, here's one I still have (thankfully, since like so many others of my past, it has never appeared to me on the vintage sites).  I think view B would be a good choice for a casual summer shirt in 2010 - do you agree?
Posted by KayY at 9:20 PM