I was going to call this post "Jalie duds" (i.e. clothes) but then I realized that the first dictionary meaning of "duds"  (a thing that fails to work properly or is useless) is the exact opposite of how I feel about my new Isabelle leggings and Pika exercise top. 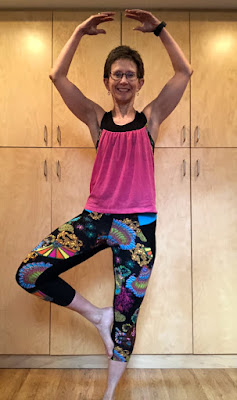 I actually made the leggings a while ago but hadn't worn them because (a) they are capri length and it's still cold around here and (b) the tops I thought would go with them really didn't. Today I finally finished the Pika and now I have an ensemble. I continue to be the best dressed person at the gym I go to.

This is the first time for the Isabelles but my third Pika (the other two are the sports bra without the overlay).

I bought the Isabelle pattern even though the Cora leggings fit really well because I was lazy about how to shorten Cora to capri length (seriously?). And I like to support Jalie. 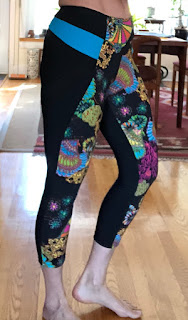 Between the two patterns, I find that Cora is more straightforward to sew. The pattern pieces for Isabelle are strangely shaped and several look almost identical, making it imperative to pay close attention when assembling it. The only part of the Cora pattern that is slightly complicated is the colour-blocking on the lower leg. I also prefer the pocket in the Cora (at centre back) than the CF pocket in the Isabelle, which I did not make. Both of them fit really well, although I thought the Cora was too low-waisted as designed. The Isabelle is very slightly higher I think.

Pika is a fantastic pattern - I love the firm fit that never shifts around. I opted for the overlay this time to get some midriff coverage. I'm not 100% convinced I love it, in part because the fabric I used is seriously nasty stuff (poly-cotton burnout knit). My machine had fits with skipped stitches, and it just did not want to behave. I had nothing in stash that would do, colour-wise, and this was on offer at the local Fabricland when I went looking.

I cut about 7.5cm (3") off the bottom of the overlay which seemed way too long to me. I was dreading sewing the hem on it (those skipped stitches) but I fused it first and then sewed over the layers with no problem. 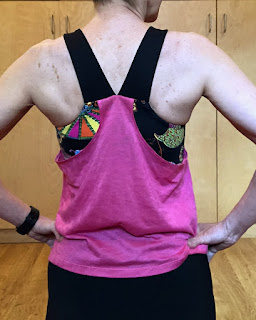 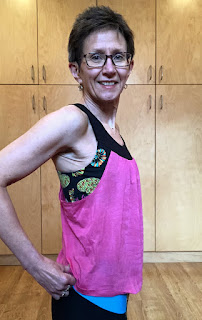