In Montreal, we were working on pants fitting. I took 3 muslins and some fabric. 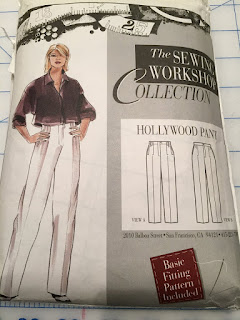 I had high hopes for the Sewing Workshop Hollywood Pants. High waist, three (3) pleats in front. But no. I could have fiddled the fit but the legs have that early 90s pegged shape. I wanted flowy and these are not. 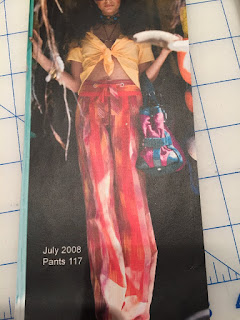 So then I tried this Burda magazine pattern from 2008 that I had already traced (years ago) but never made. I like these - in theory. However: the yoke is big and the pleats start too far down, visually truncating the legs. (This model must be wearing 6" heels...) 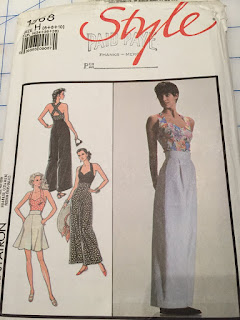 So it came down to door number three, Style 1568. This is a pattern from 1988. I had previously made the trousers which have a very high waistband, deep front pleats and a 25" hem width. Back in the day I wasn't so finicky about fitting, but I noticed that I had lengthened the back dart to take out excess fabric. My Montreal fitting consultants told me I needed to scoop out a bit more from the crotch curve in back, and shave off a curve at the high hip, but otherwise my blaze orange muslin got a thumbs up.

My first pants from this pattern were made from a pretty stiff wool in black. I wore them for years. My current version will be the polar opposite - lightweight striped linen.

Sewing from stash is good.

In other sewing news, I made another pair of Cora shorts. So far I like them in basic black with a little pop of colour. This time in yellow. 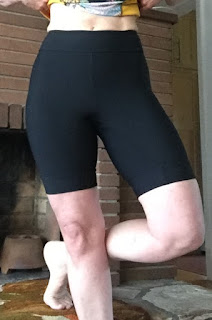 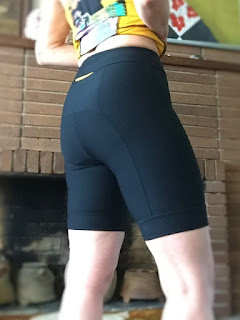