Making the shingle dress is kind of addictive.  I could not stop sewing ...

I think getting a good fit on the base is critical.  Whatever fit flaws are in the base will translate to the shingles. I'm glad I figured out how to adjust the side seams and neckline for my figure, and I'm super glad I figured out the horizontal back waist dart before I started stacking this dress.

Yes stacked.  Bottom to top.  A layer at a time.

It was quite the process. Making this had me running from my serger (where I did a narrow rolled edge along my chosen hemline stripe) to the cutting room with my yardage and the base pieces to cut the shingles. Then back to the sewing machine to baste them in place.  It was back and forth about two dozen times.

I lengthened the dress so it's between views A and B. This meant adjusting the length of the shingles.  I added about 2" (5cm) to the bottom of the lowest shingle and 1" (2.5cm) to the middle one to keep the proportions (more or less) equivalent to the original. I did this on the fly.

I started with the lowest layer which I lengthened to match my base (actually 1cm longer, so the base will remain hidden when the dress is worn).  I basted it to the base at the sides and top.  When I was satisfied that it was lying smooth, I sewed the top down using a 3 step zig-zag stitch and trimmed off the excess above the stitching.

Next layer.  I did my narrow rolled hem, put the fabric on the cutting table (as in the photo to the right), laid the base pieces on top, figured out where the top edge of the next shingle should be (using the original shingle pattern pieces).  I cut the side edges using my adjusted base as a guide rather than the pattern piece. 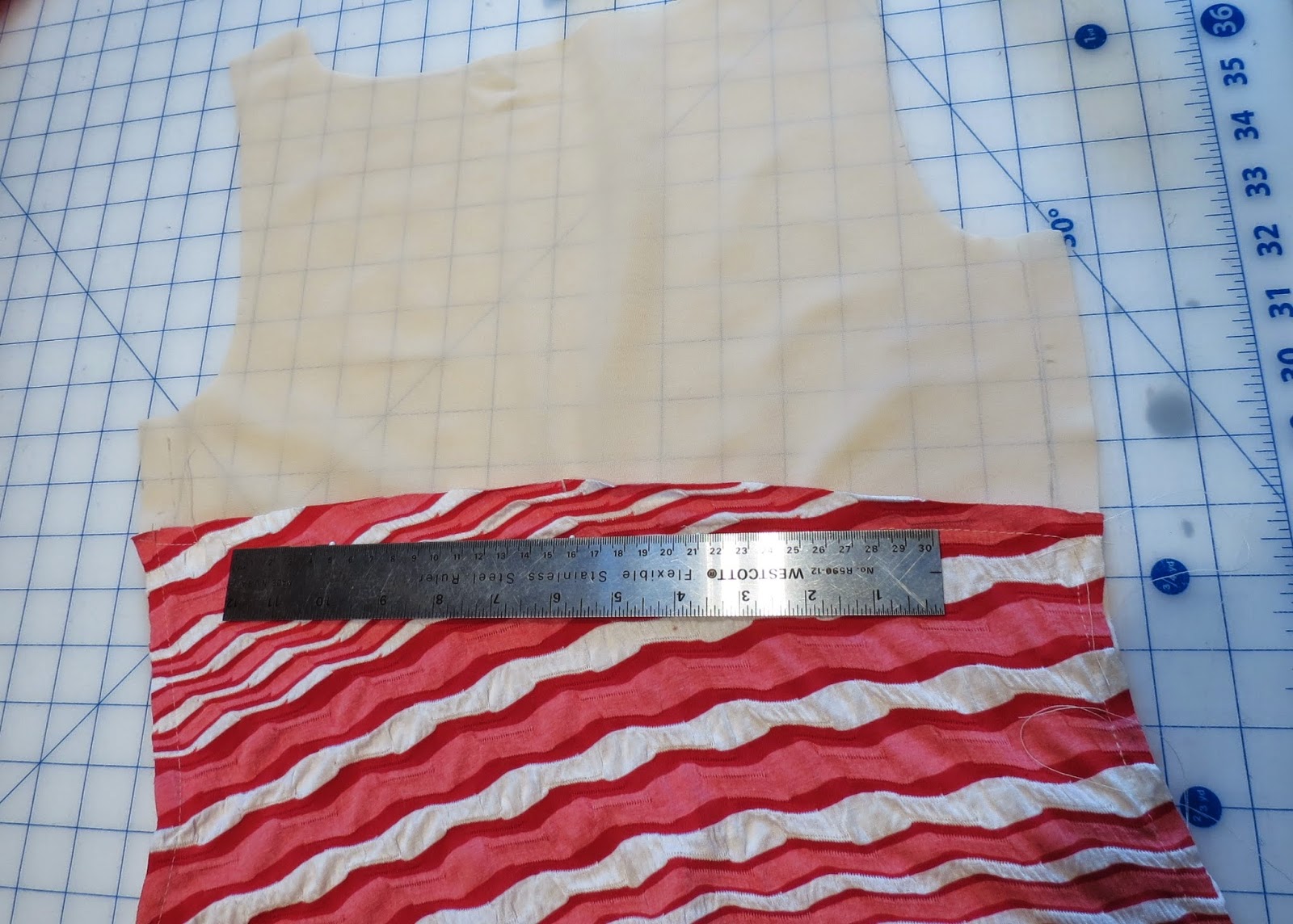 The back dart is at left.  I slashed between the seam lines and overlapped the dart, sewing it closed with a 3 step zig-zag stitch.  Then I trimmed it close to the stitching on both sides.  The power mesh isn't going to fray any time soon.

I had to adjust the second shingle from the top for the back waist dart.  I was on my way to inventing the necessary technique, but on reading PR reviews, I found that JudyCook had blazed the trail, with Sarah Veblen's help.  My approach was slightly more approximate.  I pinned at the side seams and then smoothed the fabric up at the top until it was the same length as the power mesh base.  You can see, in the photo with the ruler, that the upper edge is curved where I did this.  I stitched in a straight line and trimmed off the excess.


As others have written, it's essential to do the back and front at the same time, so the shingles match at the side seams.  I still had to fudge once I was putting them together.  I just pulled out the basting stitches at the side seams, and pulled the errant shingle into place, pinned and stitched.  Stretchy fabric is very forgiving, luckily.

The side seams are thick!  At least 4 layers everywhere and 6 where the shingles overlap.   I trimmed the base and the overlapped layers too, before serging the side seams with a four thread "safety stitch". 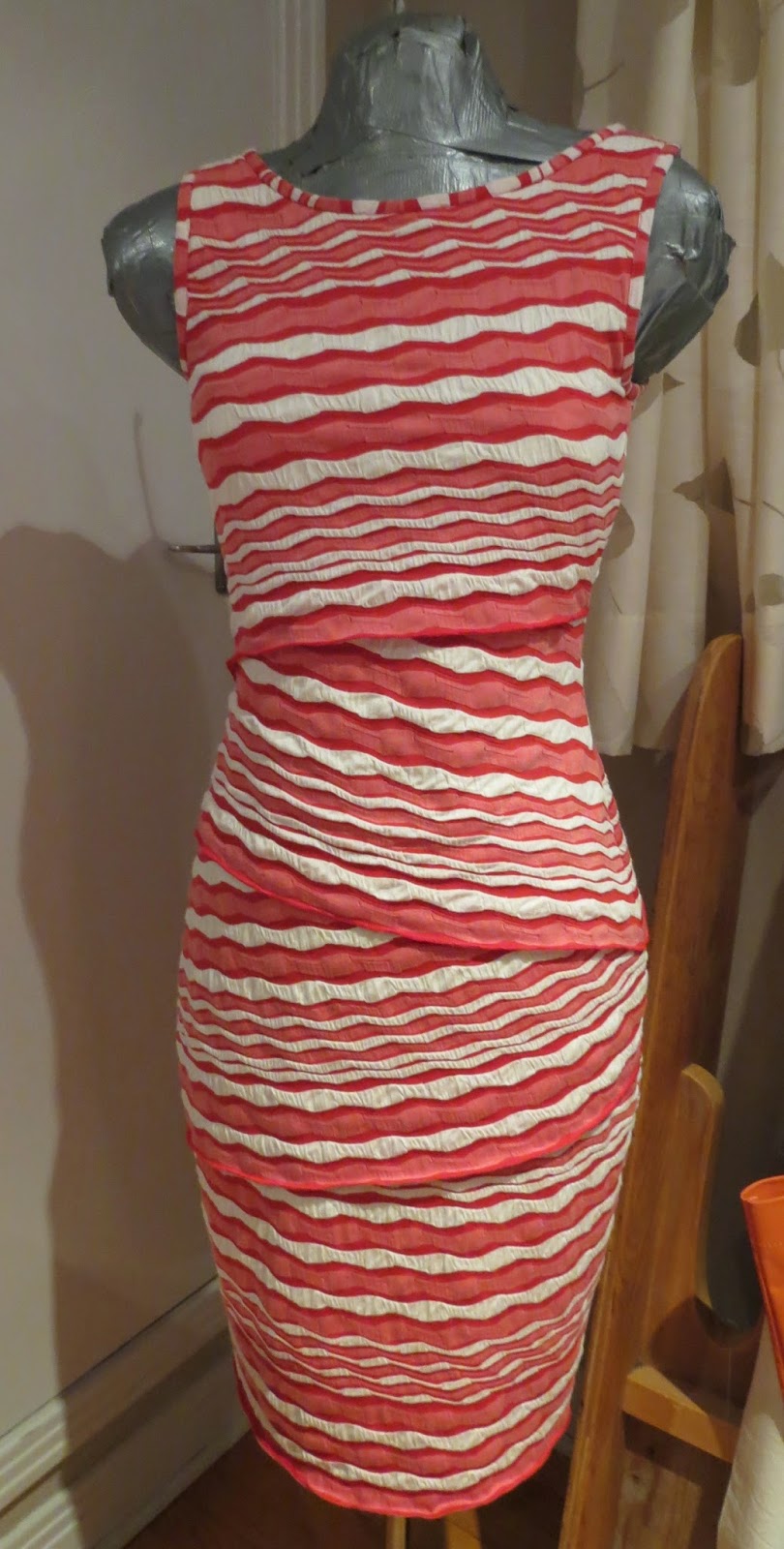 I will wear it tomorrow. I am pretty sure it's my new favorite dress.