Without more - here is my completed Cherry Equinox top.  For readers on Ravelry, follow this link to see more.  For those who are not, you are missing out on the best-designed craft-oriented social media site on the www.

Ah yes, you want a picture? 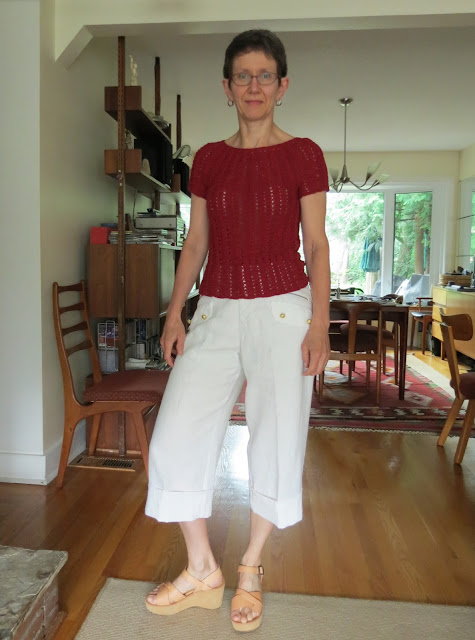 The Sewing (Knitting) Lawyer, in her natural habitat.  As predicted, this top looks pretty good with white linen (what doesn't?).  Check out my new sandals - I found them yesterday at a local consignment store. Kork-Ease, in my size, hardly worn.  Score!

This top is made from 100% bamboo yarn which was surprisingly nice to knit with.  This despite its structure - it's composed of seemingly hundreds of fine threads.  Very occasionally, my needle tip would split the yarn, but mostly it behaved. 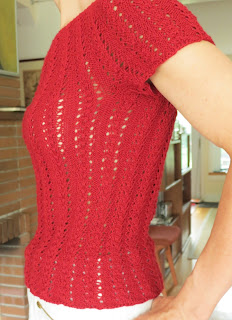 At left is a close up showing the texture of the knit better, as well (maybe) as the shaping I put in at the waist by decreasing purl stitches between the patterned ribs.

I did not follow the pattern in several important respects.  The free pattern (Equinox Top) is available here.  A photo from that page may illustrate the effect of some of my changes.  (I had help from knitters who had gone before me in figuring them out.)

I still can't figure out why my gauge is so different from the pattern.  It is a different yarn, but the same weight.  I could stretch my top to have the same gauge as the pattern photo, but given the general bagginess of the top, it looks as if it just falls that way.  The thing I really couldn't abide, though, is the loose sleeves.

I am currently swatching some linen/silk blend yarn  from ColourMart for my next knitting project.  The pattern I'm planning to use is Vitamin D.  So far there are over 2,300 projects for this pattern on Ravelry (by comparison there are 97 including mine for Equinox).  I didn't think I was a big fan of the drape front cardigan but this one is appealing.  There is a very interesting pattern of increases and short rows, which will hopefully keep it interesting even though it's an awful lot of stockinette stitch.

Today is kind of wet, however, and I'm planning to do some sewing to give my hands a rest.  Up next?  It might be a patterned version of the Jalie jeans pattern (a wearable muslin to verify my size since I lost weight after last making it), or another instant gratification version of Vogue 1250.  I'm leaning towards the latter.
Posted by KayY at 10:58 AM