Oh Harriet, I'm not sure about this 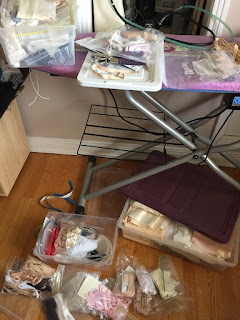 I've had a lingerie explosion in my sewing room. And I've been sewing bras for days. Am I closer to that perfect-fitting bra? In one sense, yes. In another, definitely not.

Let me explain. When we last spoke, I had sewn up two Q&D muslins of two different patterns, and decided to go all out and sew up a real version of the Harriet bra pattern.

However, based on my fit test (sewn out of hideous pink duoplex), I refined the pattern pieces for the bridge (and side) and the cup. For the bridge, I kept the narrow top, but angled the bottom more, making it a wider triangle. This was based on my TNT bra pattern. It was kind of dumb to even try a new bra pattern without adjusting the bridge right out of the gate, in retrospect. For the cup, I trimmed the upper cup and inner lower cup (the triangular piece) slightly because I'm flatter towards the centre than some people (for whom Harriet is designed, I have concluded).

At this point, we may usefully ask whether The Sewing Lawyer thoroughly read and understood ALL the instructions for this bra pattern. The answer is "not really".

Now that I read all the instructions, I see that you are supposed to cut the cups and cradle out of "low-stretch knit fabric designed for supportive bras, such as duoplex, simplex or stable tricot". My tester was duoplex. So far, so good.

However, I hate duoplex but I have a bin full of nice stretchy lacey fabric for bras. So I cut my first "real" tester out of a firm but stretchy lace fabric. I lined the bridge and cradle pieces to stabilize them with some random non-stretchy and sort of thick fabric from stash. I lined the cups with some fairly firm but stretchy stuff, which is also sort of thick. I went nuts topstitching, with a two-stitch zig-zag built into my sewing machine. It sort of stretched out the seam lines. I steamed them into submission and got to the point where I could try the bra on (bottom elastic and wire channels installed, wires in, straps and fastenings pinned on).

What did I learn?

Well, I might have steamed the cup seam lines into submission, but the combination of aggressive topstitching and stretchy fabric meant the cups were still too big.

Also, the combination of my fabric choices made for a pretty lumpy bra.

And I didn't like the fabric all that much.

On the plus side, the band fit really well, and the wire line was totally in the right place. But those cups!

I decided to cut my losses and salvage what bits I could and move on.

For my second outing, having learned a thing or two, I made some further changes.

First, I used thinner fabric (a stable tricot) to stabilize the frame.

Second, I shaved still more from the cup pieces in the same centre area as before to flatten them some more.

But I cut the bra pieces (all of them) from a thin but firmish stretch lace. Based on previous bra-making experience (but without truly having understood the instructions) I figured that this fabric had enough oomph for the cups without lining.

I again got to the point of being able to try this on, and realized I was wrong on the last point. I should have lined the lower cup pieces with the stable tricot. This wasn't going to work.

On the plus side, the bra looks great. It's pretty, in a non-ostentatious beige lace kind of way. The band totally works. And it does fit in the sense that there isn't excess fabric in the cups.

I could recut and restart with due attention to reducing the stretch factor in the lower cup pieces. However, I have also come to the conclusion that the cup shape on Harriet is just not me. It isn't only the stretchiness of the cups that is bugging me. Based on other bras I have made, this same fabric, unlined, would be fine for my TNT bra. The fabric gives me enough support. What is bothering me is the way that the cup as designed wants the breasts to be distributed. It's not that the cups force them in and up (like a push-up bra). They are, as other reviewers have noted, designed to give quite a round shape. That shape doesn't match mine.

What I should really do is do a further mash-up of the Harriet band and my TNT cups. But first, I need to get the right size rings and sliders...