No? I can barely find it myself, if I'm honest. It is there though - on the right (left side of the photo).


And what about the placket?

Nope. Not that either. You can tell it's there, but only because there are buttons. Why yes, of course the placket underneath also matches. 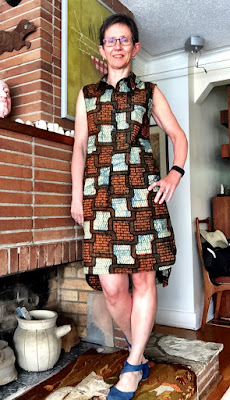 I had a length of wax print. The selvedge says "Guaranteed Angler Wax Made for Nigeria". I wanted to make something that wouldn't chop it up, as the scale of the print is rather large. So I turned to McCalls 6885 again. It's a simple shirtdress that is a great item to wear on a hot summer day. Not only does it have minimal seaming, it's also suitable for a beefy cotton like my wax print.

This time I made the hi-lo shirt tail hem. It's growing on me.

Because of fabric-matching imperatives and because I only had 2.0 metres (less than the pattern called for) I had to make a seam in the upper back. I was very focused on matching the upper and lower pieces and did not even consider trying to get the side seams to match. However, as you can see, the sewing gods were totally on my side on this project because the side seams matched *perfectly*. It was a very fun surprise.

There is not much to say about sewing this. It is a joy to sew with well-behaved fabric like this cotton.

I wore the dress twice before making a couple of changes. First, I sewed down the bottom pointy end of the placket. As designed that tab end is not supposed to be attached to the dress. On my first version of this pattern I didn't realize this and just sewed it down. This time I made it as intended and ... nope ... it just stuck out. So I topstitched it down making sure that the little CF pleat is perfectly centred at the point of the placket.

The other change I made was to add a little piece at the side seams to reinforce the top of the side slit. Without these, it felt like there was a lot of stress at that point. I cut squares of fabric on the straight grain, approximately 5cm square, folded them diagonally, and sewed them in place. They form little triangles. The lower edge is long enough to give movement but not long enough to allow any strain on the lower end of the seam. Plus, it adds another 2cm or so of thigh coverage at the side.
Posted by KayY at 5:46 PM