Is there such a thing?  The Sewing Lawyer likes to flatter herself that the answer may be yes.  See the evidence for yourself.

I may have mentioned before that the February, 2012 issue of Burda Magazine is probably the very best in more than a year.  I'm in the process of confirming that, as these pants are the second garment made from that issue.  I could use more of these!  They are comfy, fit nicely, and, made from a black rayon-poly-lycra ponte knit, will go with almost anything. 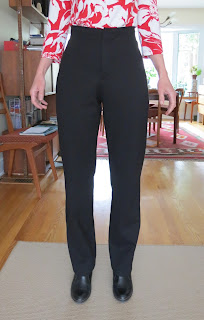 However, you have to really look for this one in the magazine; it's a gem that Burda seems to have deliberately hidden. They do it fairly often, in my experience.  A brilliant pattern is shown only once (the pattern insert says twice, but in fact they seem to have substituted another pattern for these to coordinate with the grey sack-like top, yellow socks and clunky loafers).  And there, it's outshone by the other flashy garment it is being shown with (the "Miss Butterfly" kimono on p. 17). Bonus: it's sewn up in black, so its features completely disappear on the page.  Why, Burda, why? 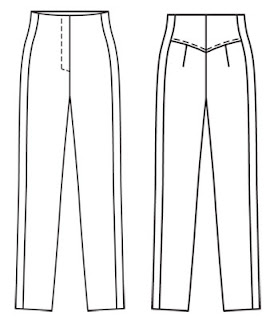 I know you may think I am also guilty of hiding the many virtues of this lovely pattern by sewing it up in black, but at least I've tucked in my top so you can see the basic outline.  Here's another view and the line drawings again.


I think you can click on these to enlarge them tremendously.


So, as you can see there's a deep V back yoke, high waist and fly front opening.  The sides are a strip approximately 10cm (4") wide.  I traced with 2.5cm (1") seam allowances just in case, but after trying them on, decided they fit if sewn on the intended lines except at side front, below the waist.  So in effect, my pants are 4cm bigger around than Burda intended at the hip, and 2cm in each leg.  In the result, they are slim but not tight.

I used a woven cotton for the fly shields and facings to reduce bulk and eliminate stretch.  As I've been doing recently, I constructed them on my sewing machine using a tiny zig-zag (1.5 x 1.5 mm), rather than on the serger.

I can't think of anything else to say, except:  Run and make your own pair!