More about the Teal Triangle

In a comment, okie2thfairy asked if I could show in more detail what I was talking about when I mentioned "improving" the pattern for my Teal Jakku with triangle insets at the shoulder. To remind you, here is the completed front shoulder.

Below is a picture of the pieces, before assembly, that were made according to the pattern. 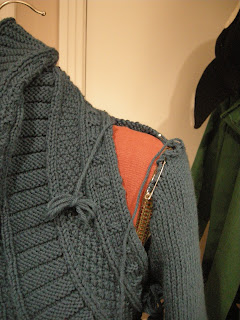 The textured piece is knitted as a long curving rectangle (made with short rows so that the outer edge is longer than the inner edge).  After the piece is seamed, it forms a donut-shaped piece.  The short edge is then sewn to the lower edge of the upper back piece (so it forms the lower back), to the armscye of the sleeves, and then up towards the back neck edge where it forms the collar.

In this photo of the front of this jacket on the Finnish pattern site, you can (I think) see the distorting effect on the upper front and collar.  The shawl collar is forced open sideways and the fronts have a harder time meeting in the centre.  I suspect that the jacket would be less comfortable to wear as that piece would be fighting to return to its knitted-in shape. 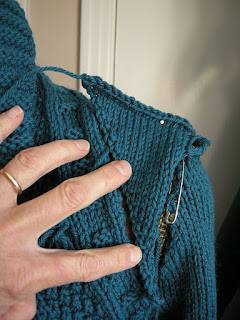 So I made two little triangular pieces to fill in the shoulder corner, and avoid distorting the collar.  The result is that the collar hugs my neck, is very cozy, and the whole sweater feels wonderfully comfortable.
Posted by KayY at 12:20 PM