Last year, DIGS posted about these fantastic sleeves she had spotted on Style.com - part of the 2010 Akris resort collection.  (They are in #2, #8 and #12 in the slide show.) 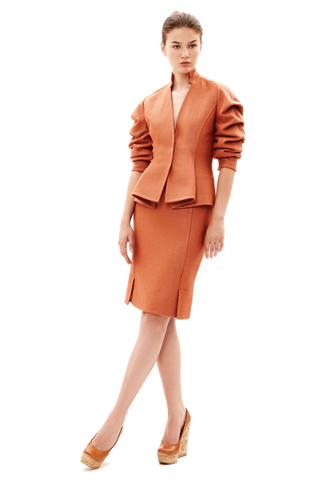 Vogue, approximately one year later, came out with their new wardrobe pattern, 8718.  Do you think it looks a little bit familiar? Except that the Akris has a double collar, no waist seam and no front yoke, and the saddle shoulder seam is higher.  And the V neck is lower and narrower on the original.  And the sleeves are not quite as luxurious.  But close enough.

So I got the sleeves sewn enough to pin them into the intended soft pleats/folds.  I decided to tack the sleeve seams to a ribbon instead of tacking them directly to the lining fabric.  It's a good thing I did, since monkeying with the pleats after the jacket was lined would have been a royal pain. 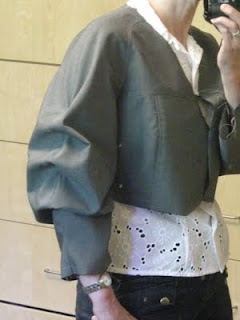 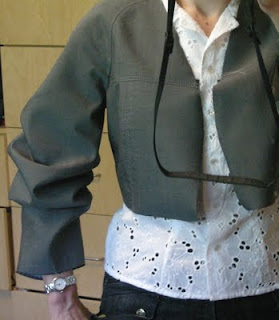 This is, however, not quite the effect I had in mind.

What went wrong?  Well, first, I didn't anchor the top pleat as high as Vogue intended (due to my construction method, I missed that there should have been one higher fold).

I'll adjust that, but will also have to snug up the  lower sleeve which is so loose it's flapping.  Look at the Akris original.  That sleeve is snug enough around the model's forearm that if she pushed it up it would stay.  The sleeve is only slightly looser in the Vogue pattern photo.

Some slight deconstruction is in order.  Grrr.

PS:  I goofed.  See the next post for more information.
Posted by KayY at 3:07 PM