I had a lovely time at Pattern Review Weekend in Stratford Ontario - me and 100 of my best sewing friends! The special activity for Friday morning was a visit to the Stratford Festival costume warehouse, which was fantastic! But there was also early morning running, much chatter and convivial gatherings at dinner or brunch time, and in the hotel bar. We admired each others' clothes (most were wearing me-made throughout), learned tricks for better pictures courtesy of Gillian (Crafting a Rainbow), watched Jeanne and Mel of Jalie Patterns sew up some of their newly released styles, and had a presentation by the folks from Bra Makers' Supply. And then we went fabric shopping...

I had been on a fabric diet but fell off the wagon fairly hard. This was inevitable when I realized we were going to Ann's Fabric in Hamilton. I had heard about this store but for some reason (even though my parents live in the same city) I had not visited it before. I was feeling like I wanted new choices for sewing active wear and I knew that Ann's specialized in such choices. Most of my current workout wardrobe is from fabric picked up at the last PR Weekend I attended, in 2010!

So I may have acquired 6 coordinating fabrics for my active wear needs for the next 8 years ... And I will definitely be visiting Ann's Fabric again.

Another new-to-me store was Len's Mill Store. This is a chain of 11 stores but they are very localized; mostly in southwestern Ontario. I see there is one in Hamilton (which I may have to check out), but we went to Woodstock. That store is massive! I had fun shopping in the bargain bins, where I found a length of scuba knit printed in an appealing free-hand "plaid" of bright colours. I figured I had enough to make a dress of some kind. But it had to be super simple to avoid breaking up that print.

Then this morning I got an email from MariaDenmark telling me of a 50% sale on her patterns. I realized her pattern for the Audrey dress was just about perfect for my scuba. No darts or seams in the front and only two vertical darts in back. The reviews on PR were very positive. I had a day to sew. I figured I could get the PDF taped together, cut the dress out and have it finished before dinner, and I was right. I even had time for a little outdoor photo shoot. 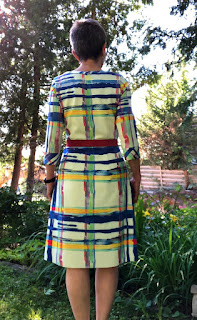 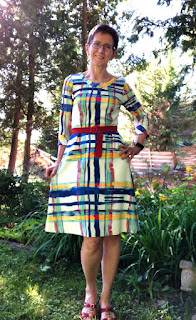 The sewing was quite straightforward; the only tricky part being attaching the shaped neck band. I really like the shape of that band, which is deeper at CF. I cut the neckband and sleeve cuffs on the "bias" for interest and because due to fabric shortage there was no way to match the pattern.

The dress looks OK by itself but I decided I like it with a belt.

Then I took some selfies.