Negative! (Ease, that is)

I've been working out regularly for 6 years or so. With a personal trainer. And with weights. I wish I had started earlier because it would have helped to prevent my bones from deteriorating (which they are doing, damn them). You younger ladies, pay attention! There's lots of good information here. 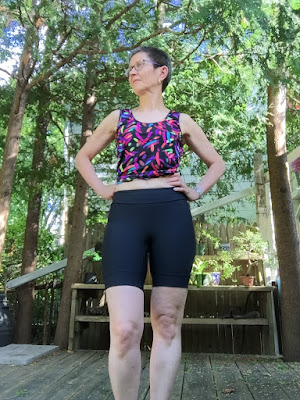 But I digress. Working out is not a lot of fun in my opinion, but it is ever so much more bearable if you are wearing comfortable and stylish workout clothes. There are so many more options now than there were the last time The Sewing Lawyer made such items in 2010. The shorts and tops I made then are still in regular rotation and look pretty good, but to be honest they don't fit all that well (since I lost 15 lbs a few years ago) and I just want new stuff.

I still have my Kwik Sew patterns from the 80s but last week, I bought two of the newest Jalies - the "Cora" tights and the "Anne-Marie" top. It was definitely time. Plus, I have to keep up my relationship with my Coverstitch machine.

Stash diving was productive - in 2010 I bought quite a lot of stretchy stuff at Susie Spandex at PatternReview weekend Montreal. Plenty to cut out a new pair of shorts to test out the Cora pattern. 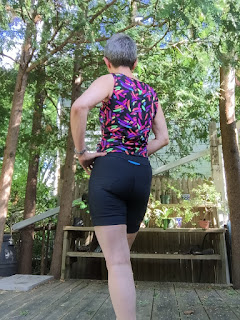 They are very plain given the number of seams and opportunities for colour blocking, but I decided to make these mostly black. The only shot of colour on the outside is the pocket backing, in turquoise. My little surprise.

The inside shots do a better job of showing the construction of these shorts than the modeled photos, because my wooly nylon thread is grey rather than black. There seems to be a little shaping built into the seams, but most of the fitting work is done by the lycra.

I'm pretty chuffed at my stitching on these for two reasons. First, I stuck with the woolly nylon in the loopers through numerous tests (during which the upper looper thread broke again and again) until I figured out that I had to loosen the looper tensions ... a lot ... to keep the thread happy. No breaks were experienced during actual construction (YAY!).

Second, I maintained my state of non-intimidation with respect to my coverstitch machine. I started with the black on black shorts rather than the more colourful Anne-Marie top (to come) so that my mistakes would be totally invisible as indeed they are. Stay tuned to see if I can maintain my track record with the top, where I've chosen to use more colour.

I made size T based on hip measurements and was pretty skeptical that I'd be able to fit into these as they appear, off the body, to be big enough only for a child. I kept the faith in the negative ease though, and look!

The only change I made to the basic pattern was to cut 25" of elastic for the waist rather than the 22" Jalie thought would be A-OK for a size T person with a 29" waist. Seriously? A 6 year old has a 22" waist (according to Jalie's size chart). The extra 3" was a little bigger than the actual circumference of the waist band piece so it was a little awkward to sew, but once I put it on it all expanded nicely and without cutting into my much more than 6 year old flesh.