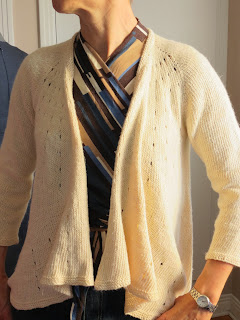 Back in late July I mentioned I was swatching for another knitting project, the Vitamin D cardigan.  This is a hugely successful pattern if the  numbers on Ravelry are to be believed.  Then, there were just over 2,300 projects; now another 175 have joined the throng.

I'm hoping this grows on me.  I like the drapiness of it (a ColourMart linen and silk blend of unknown proportions) and hope the neutrality of its colour makes it a useful addition to my wardrobe. 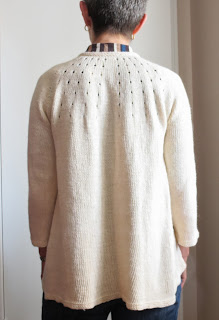 Its fibre, shape and style probably make it more a spring to summer garment than a fall to winter one but I'm wearing it now on this sunny and somewhat unseasonably warm October day, but predict it will soon be packed away to be a surprise sometime around next April.

By the way, that red knitted top featured in my late July post stretched a great deal after I washed it.  It is at least 4" longer than it was in my July photos, and looser widthwise too.  The neckline became impossibly open.  I have prevented it from being completely unwearable by putting a line of crocheted chain stitch behind the neck ribbing to pull it in, which has the effect of supporting the weight of the whole top and keeping it from sagging too terribly.  I may later have to do something similar to keep the armscye from stretching out any more.  This is the last time I will ever knit with rayon yarn!  It's just too heavy for its own good. 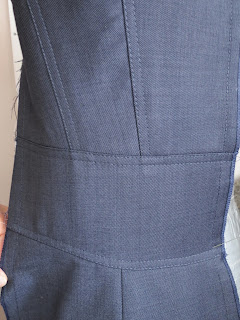 I have also, you may be glad to know, been making progress on my latest sewing project.  I'm loving the topstitching!

I'm not following Vogue's instructions, which want you to complete the bodice, the midriff band, and the skirt in the round before sewing them all together (fully lined), with the last step being ... putting in an invisible zipper at CB.  I'd rather sew in the zipper flat, thanks very much.  That means I have assembled the back (a view of one side to the left) and will sew side seams last.

All well and good, but the overlap at CF bodice requires one to have the inner bodice finished (including at least part of the lining) before attaching it to the front midriff band.  I'm currently working on the topology of how to accomplish this.  In my mind I think I can make it work.