The Sewing Lawyer has a lot of stuff.  And, until recently, there was not a whole lot of room to store it all in.  I had the third (smallest) bedroom for my sewing room.  In that approximately 8 by 10 foot space, I had:


Due to certain non-negotiable features of the room (primarily a corner closet door and the location of electrical outlets, there was only one way to get everything in, and the result was a messy maze.  It was embarrassing. Lately, it was dispiriting.  I think it was depressing my sewing mojo. 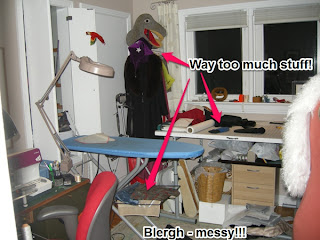 The next three pictures date from early 2009.  From time to time it was better, but then it was also (if I admit it) periodically much worse.

To the right is a view from the hallway door.  You can see the closet door in the far left corner.  It's really hard to get into the closet because the door opens the wrong way (hinges on left).  The ironing board jutted into the room because that was the only place it could go.  But it was like a big wall blocking off access to the cutting table, closet and window. 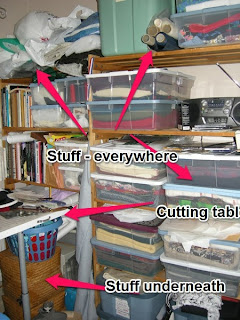 The beautiful photo at left shows the two shelf units that were located in the right hand corner on the window wall, i.e. opposite the hard-to-access closet from photo number 1. 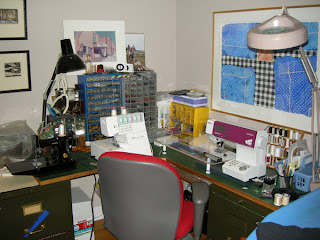 One more? To the right, please meet my sewing table.  This was inherited from the original owner of our early 1950s house.  He built a lot of items for the house out of 5/8" plywood.  The table top has green battleship linoleum on top and it weighs a ton.  Perversely, I like it. However, the actual sitting space (between the two ancient file cabinets that hold it up) was limited because the table was jammed between the hallway door on the left and another closet door on the right.  That closet stores all my pressing equipment, and also contains the only electrical outlet I can use for my iron and ironing board without blowing a fuse.

Several years later, and my son (who occupied the middle sized bedroom) grew up, went off to university, and eventually moved away.  It finally felt right to expand into the unused space, and besides, we just took him the biggest piece of furniture - a double bed.

Off to Ikea we went.  For the new (to me) room I purchased the Expedit shelf unit that is 4 cubes square (16 total) and the 8 cube unit on three casters.  I had a lot of fun putting them together, and then even more fun moving all my sewing, knitting, fashion and miscellaneous crafting books into them.  I have also ordered a Murphy bed so that my son will still have a place to sleep when he visits.  When no one is sleeping there, it will fold away leaving lots of room for ... my cutting table!  (The table takes up a lot of real estate, but it is just a door that sits on Ikea legs; so knocks down flat in no time after you find places for everything that might perhaps have been piled on it.)

I'll document the annexed room once it's finished, but now, behold the new, reorganized, MUCH IMPROVED and seemingly MUCH MORE SPACIOUS sewing room of The Sewing Lawyer.  Since pictures say it all: 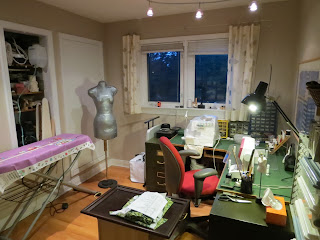 The view from the hallway door.  With the cutting table gone, I could put the corner desk in the opposite corner, which allows the ironing board to be placed along the wall.  This is not only a better use of the space, it'll be easier to use my gravity feed iron in this setup, since the hose comes from approximately the middle of the board instead of the very end.

I have a tray set up on top of the little Ikea drawer unit since I need somewhere to pile up my in-progress project. 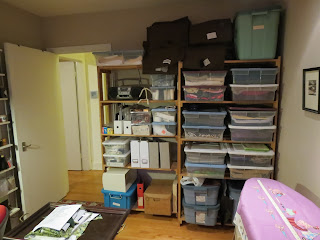 I put the two shelf units on the hallway wall, where the sewing table used to be.  They "just" fit.  I have to reach in behind to work the light switch. 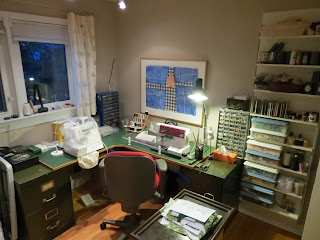 I'm very pleased with this layout and hoping to be very productive in it.
Posted by KayY at 9:46 PM