The Sewing Lawyer hasn't purchased many patterns from the new* independent pattern companies that have flourished on the internet in the past few years.  There are several reasons for this.  One is that there are So. Many. Patterns. already in her collection, waiting to be made.  Another is cost (a minor quibble).  The third and most significant reason is doubt - that the patterns are good quality, reliable, and will produce the stylish outcome promised by the blogs and websites.

This doubt was fuelled by an unfortunate experience with one of the first of these independent pattern producers.  The Sewing Lawyer forked out $20(US) per pattern for two designs that looked so great, so wearable, so fashion-forward (dreaded phrase), so "just like RTW".

And then found an (obvious) printing error on the pattern tissue, and spent far too many hours sewing a muslin that could not be made to look anything like the so-called technical drawings on the pattern envelope and fit badly, to boot, before spending far too many additional hours cloning the look of these drawings through much laborious work.  (If you want to read more and you are a paid-up member of Pattern Review, you can do so here.)  This experience led to a decision not to throw any more time away on the second expensive pattern (also satisfactorily cloned - read about it here).  It also led The Sewing Lawyer to be convinced that when an individual woman designs patterns for mass distribution, she could be mentally designing for herself (her body type and size), and grading more-or-less successfully for people who are not her body type and size, and that if one is not like her, one should perhaps beware. 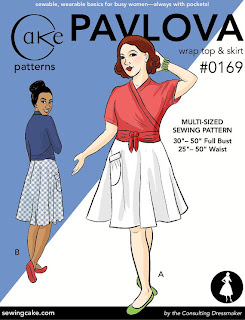 Now, Stephanie the Consulting Dressmaker who started Cake Patterns ("sewable, wearable basics for busy women - always with pockets!") is a designer whose body type and size are not like mine, but a variety of sewers had made her first dress pattern and everyone seemed to love it.  Some of them were shaped like me, so I bought the pattern.  (I have yet to tackle making it, but promise to do so ... sometime.)  The pattern that really got me interested, however, was her second offering, #0169, aka "Pavlova".  It's a pattern for a wrap top and skirt, and it was the wrap top that captivated me.

I liked the uncomplicated shape, the high and reportedly 100% secure wrap neck, and the intriguing idea of a waist-length front with a longer back that you could tuck in to avoid gaposis.

The skirt, meh.  It's a full circle, and therefore a fabric hog.  Too much for The Sewing Lawyer (as previously reported). 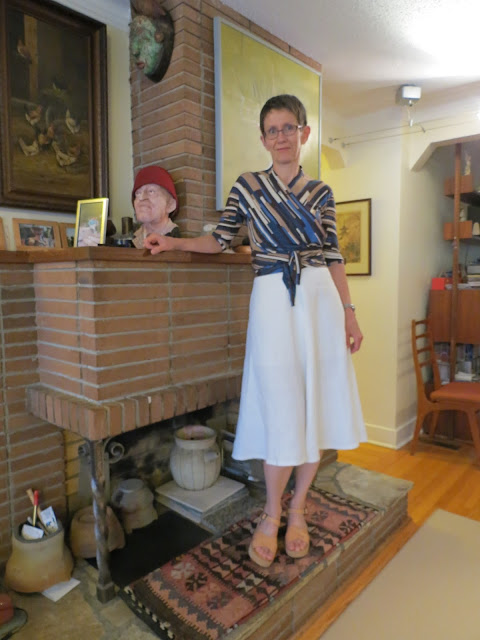 To make a long story short, I cut the top out of some (cheap and cheerful) rayon/lycra print jersey that was rediscovered in the recent excavation of the sewing room.    With my white linen skirt, it looks frighteningly like the pattern envelope, don't you think?

So ... how does this pattern stack up?

First the good.  The pattern produces a garment that looks just like the pattern illustration.  It is very comfortable and as promised, the front wrap is very secure, and the back "tail" stayed tucked in.  I love the way it fits over my shoulders.  The top has cut-on sleeves, but it fits neatly under the arm - no sloppiness there.  I will make this again (I have some red wool jersey in mind).

But, it's not totally perfect.  On the technical side, there are a couple of glitches on the pattern tissue.  When I looked at the skirt pattern, I realized after flat pattern measuring that the waist would be far too loose; you'd have to gather it into the waistband to get the intended fit at your natural waist.  It is acknowledged somewhere on the Cake website that extra seam allowances were added to the pieces (4 seams x 1/2" = 2" too big). 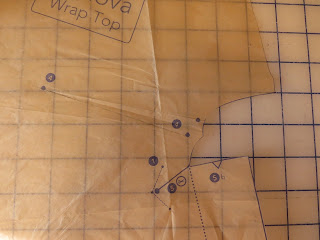 Re the top, I found it odd that the darts (at shoulder) were marked only with dots (see photo at left, I pencilled in the dart).

Then there are those numbers in blue circles, the significance of which is not obvious.  One of four of the instruction pages seems to correspond as it has a large diagram labelled with these same circled numbers, but it's not explained in words anywhere (that I could find) what this is actually for.  I ignored it.  I'd prefer more conventional markings on the tissue and fewer unconventional ones.

The size I used (30 for full bust measurement of 30-34" or 76-86cm) is printed separately on the pattern tissue and for some reason (that I think is a mistake) the lengthen/shorten line on the front piece is not in the same place or (more importantly) at the same angle as the same line on the other sizes (35, 40 and 45) which are nested together.

The separate tie piece is printed in many more sizes than the body piece.  The numbers correspond to the waist sizes (11 of them, starting at 25" and going up to 50") but there is no explanation of the use of the waist measurement in choosing a size for the top anywhere I could find on the pattern itself or in the instructions.  I cut size 30 which is bigger than my waist, and the ties are a good length.  I think they would have been too short if I had paid any attention to the other numbers.

The main pattern piece (the front, back and sleeves are a single piece) and construction of this top are sufficiently off-beat that I paid particular attention to the rest of the instructions, and the top came together without incident.  I even bought and used Steam-A-Seam (lite) tape, which made cover-stitching the very long edges of the ties and back hem a snap. Stephanie sings the praises of this product on her website, and recommends the use of "fusible webbing" right in the pattern instructions.

Things I did that were not instructed were to interface the shoulder dart area, the collar piece, and the facing/front wrap edge with a very light fusible.  I did this to stabilize the lightweight and very stretch fabric I used.  I won't need to do this when I make the top from a more stable knit, but I'm glad I did for this version.

The side front seam is designed to be a lot shorter than the side back seam, which extends to the tuck-in tail.  The front and back part company well above the level of the natural waist, as you can see at right.  This is intentional.  It allows the left front/tie to sneak out from underneath and wrap around the back (most wrap and tie tops rely on an opening in the right side seam but this one doesn't need that).  I was worried that this configuration could lead to exposed skin, but it doesn't.  I'm glad I didn't try to lengthen the front piece. 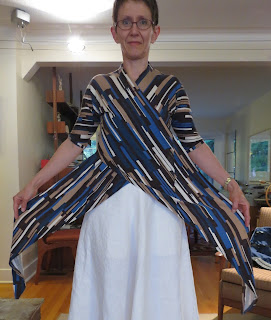 Putting the top on is a little tricky.  In the main this is because of the angle of the ties. 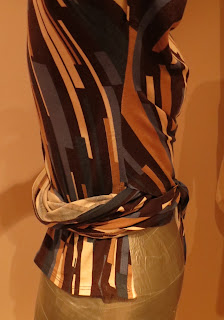 As you can see, they are a continuation of the front and point distinctly downward.  However, to wear this top the ties have to be wrapped horizontally around the body.  When their orientation is changed, suddenly the upper edge is too long and one has to be careful to prevent that edge from flopping over.  At right you can see what I mean.  This might not happen on someone with a bigger bust than me, since the upper edge of the tie would have to travel further to get over the bust.

I am going to try to fix this by taking a wedge off the tie extension at the seam where it attaches to the front. The seam is visible in the above photo - it's a vertical line where the stripe pattern is disrupted. I like the top enough that I may make another wearable muslin to test my theory before cutting into the wool jersey.  I'll report my findings here when I do that. 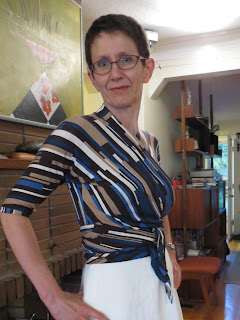 The only other thing to change is that the sleeves are a slightly awkward length - they hit *right* at my elbow - and they are a little too snug which will be a problem in a less stretchy knit. 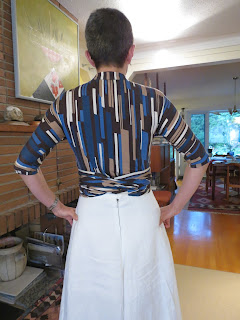 To wrap up (get it?) this already long post, here are some more pictures.  The stripe directions are pretty amusing, I think!

* The Sewing Lawyer adores Jalie patterns, which are independently created by a Quebec company.  Jalie isn't new.  It has been around for decades and its patterns are thoroughly reliable.
Posted by KayY at 10:05 PM