I've changed my mind about the trim for my Chanel-ish jacket, AGAIN.  However, it's more a refinement of the idea I told you about last week using the shredded sari yarn.

My husband observed that the reds and yellows in the sari yarn are too acidic for the fabric and suggested mixing in another yarn.

So I went deep into yarn stash, tried some different yarns and eventually decided that a smooth bright turquoise yarn (no bouclé, no hairy bits) worked.  Best of all, it emphasizes the turquoise in the fabric and coordinates really well with my recently-completed turquoise wool dress which I will wear with this jacket, if it ever gets finished.  Win!

In other news I received V1324 in the mail recently and I have a skirt length of cashmere that wants to be this skirt.  Its calling for attention and the lovely lines of the skirt temporarily distracted me from my jacket project.

I dutifully checked the printed info on the pattern re finished dimensions at waist and hip and cut the pattern halfway between 8 and 10 at the waist and graded to a 12 at the hip level.  Then I sewed it up in lovely cotton muslin.

I destroyed the evidence of the first version by immediately letting out all the seams at the hip so I could (a) walk and (b) sit down while wearing it.  The circumference was fine at the waist and high hip.  But it's very severely pegged below the hip level.  Not a good look for The Sewing Lawyer, or probably for anyone on the hourglass end of figures who wants to be able to (a) walk and (b) sit down in their clothes. 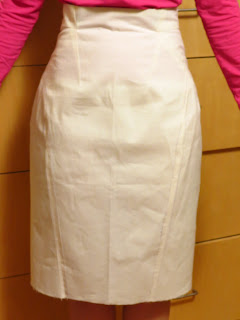 So here's the muslin once let out.  I should say I went a bit overboard with the letting out and will be smoothing out the seams at hip level in the next muslin.  (Yes this is a 2 muslin project.) 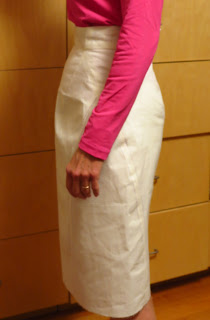 A side view reveals a problem with the front. The darts are too large and the result is too much fabric released at around crotch level in front.

I took my muslin and the pattern pieces to my sewing group meeting yesterday and asked for ideas.  My friend Carroll commented that the front looked like it was too long and suggested that I take a horizontal tuck of about .5" at CF, tapering to nothing at the side of the piece.  This seemed to do wonders for the pooching which is not a problem of too much width, exactly.

So here are my altered pattern pieces.

I realized I could kill two birds with a single stone by slashing the pattern piece for the front horizontally just below the dart (as originally marked) and slashing through the dart before taking out the extra length.  I could maintain the straight CF line and the width of the skirt front at the waist but reduce the dart take up.

I hope you can see in the picture at right that the upper right part of the piece got shifted straight down (keeping the CF perfectly straight), while the upper left part is hinged down at an angle, making the dart smaller.  The side of the piece remains the same length.  The CF length is shortened by about .5".

To the left is the back piece which is rather strange. The pointy bit at its upper right wraps around to the front and attaches to the angled part of the front piece, above the somewhat rocket-shaped side piece.

I wasn't sure if it would work if I changed the angle by grading out to a much bigger size, but it seems to have been fine.

My slightly refined letting out consists of adding 5/8" (1.5cm) at each seam (split between the two pieces) which adds a total of 2.5" (6cm) at the hem.  I need the extra at the front thigh.  In the back I added the extra width lower down.

I question whether this skirt as designed is wearable by anyone who has hips/thighs thicker than matchsticks if it's made in a woven (Vogue says wool doubleknit would work but the other recommended fabrics are not stretchy).

I wonder if my adjustments are akin to those the couture fashion houses would perform to make outlandish runway clothes wearable by real people.