I know I promised photos on location, but so far nobody I was travelling with has obliged and I did not have any on my own camera. I was temporarily stymied in uploading the few decent photos I do have by the discovery that I seem to have lost the cable to connect my go-to digital camera to my computer.  All together now:  AAAAARGHHH!  However I have a work around so you will not be completely deprived today, and I promise to share any additional pics I get from my colleagues.

Because they are the only ones I have of the completed coat, here are a few photos shot in my indoor "studio location". Ahh, the mink inside. So cozy!  It did finally get a "real" workout in the north when the temperatures plummeted to about -30C, with a wind.  I'm pleased to report that it came through with flying colours!  No wind penetration, except below the bottom button of course.  If I had thought to wear my snow pants I would have been entirely toasty warm, if not so elegant.

I like how the mink peeks out from behind the outer coat at the front and collar edges. The top button pulls a bit as you can see in the buttoned-up photo.  I think I probably sewed it on a bit too high, above the point where the collar starts to curve.  However, all things considered I am pleased with how the collar looks, since I had to adapt the pattern to match the front edge and collar of the fur. I took a lot of the flare out of the hem at CB but still, the outer coat is more flared at the hem than the fur.  Because the fabric is thin and a little stiff (think a synthetic taffeta) I weighted it by sewing small metal washers into the hem.  I thought airport security might be puzzled, but no questions were asked.

The coat is hemmed a bit longer than Vogue called for.  This decision was motivated entirely by the need to control flare.  I thought the 3" hem Vogue wanted me to sew would have been unwieldy. To the left is is the best picture showing the edges in more detail.  I sewed the outer and inner coats separately, finishing the edges of each.  The outer coat facings are topstitched at about 2cm (.75") using heavy duty thread on my Featherweight.  I then hand-sewed the coats together along the front edge.

I've already blogged about the construction of the edges on the coat.  Here are a couple more pictures.  First, to the right is the front edge, showing how the bias strip is hand-tacked to the interfacing/lambswool layer below. At left you can see how the bias strip is attached by zig zag to the lower edge of the coat, and the lambswool strip is in place.  To the right, I have folded up the bias strip and mitered the corner in preparation for hand sewing it to the coat.

By the way, I used a small glovers needle with ordinary sewing thread to do all hand-sewing on the leather, even though an ordinary needle would have been able to pierce the soft leather.  Glovers needles have a triangular tip (think bayonet) that went through this leather very easily. My souvenir hat:
Dark brown fox fur.  The crown is brown synthetic fabric, so ends up looking quite OK with the coat.  It has ear flaps that can be worn up or down.  They look kind of silly when down, but fox fur on the cheeks is divinely warm at -30 something with a wind chill. So here's a few shots of the locale.  Can you feel the wind chill? Bullock's Bistro.  I had the musk ox.  The place was hopping! Yellowknife, old and new.  The Wildcat Café was closed for the season. I was the most stylish passenger in this dog sled.  Notice how the dogs are all different colours and do not have bushy long fur.  I thought sled dogs would look like the ones in this Wikipedia article.  Instead, they are Alaskan Huskies, which apparently originated from the "Native Village dog" i.e. a miscellaneous domesticated canine which happens to live in the far north.  And loves to run.  These doggies were anxiously waiting to be hitched up (I think 10 of them pulled 4 of us).

And the northern lights (Aurora Borealis) were out, and were seen, but not photographed by me (due to inadequate camera + frozen digits).  Here's one taken by the pros at AuroraMAX, on one of my two late nights outside in Yellowknife. 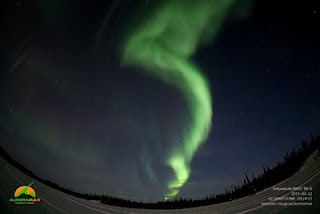 Now I'm back at home, and looking for a simpler project!
Posted by KayY at 2:57 PM